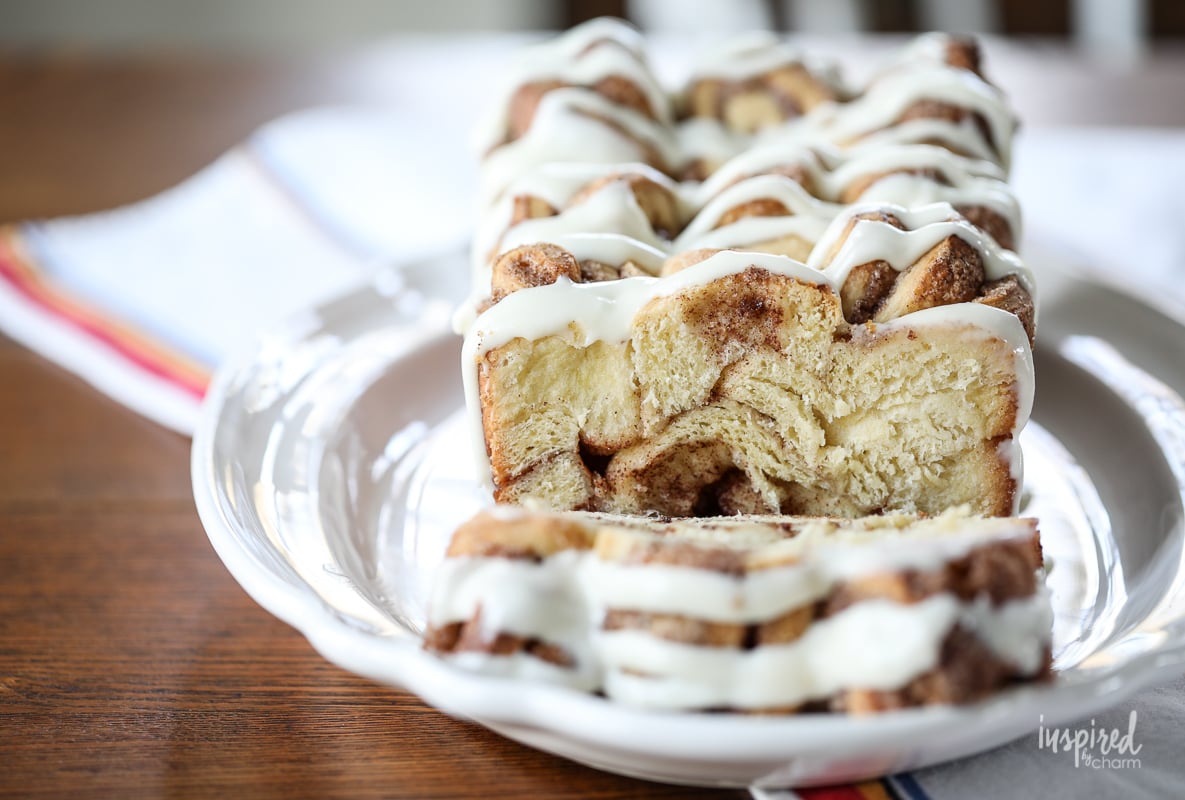 This Cinnamon Roll Bread is a classic sweet baked in a new way. Cinnamon rolls are packed into a loaf pan to create a delicious bread that’s swirled with cinnamon and sugar and topped with a cream cheese glaze. 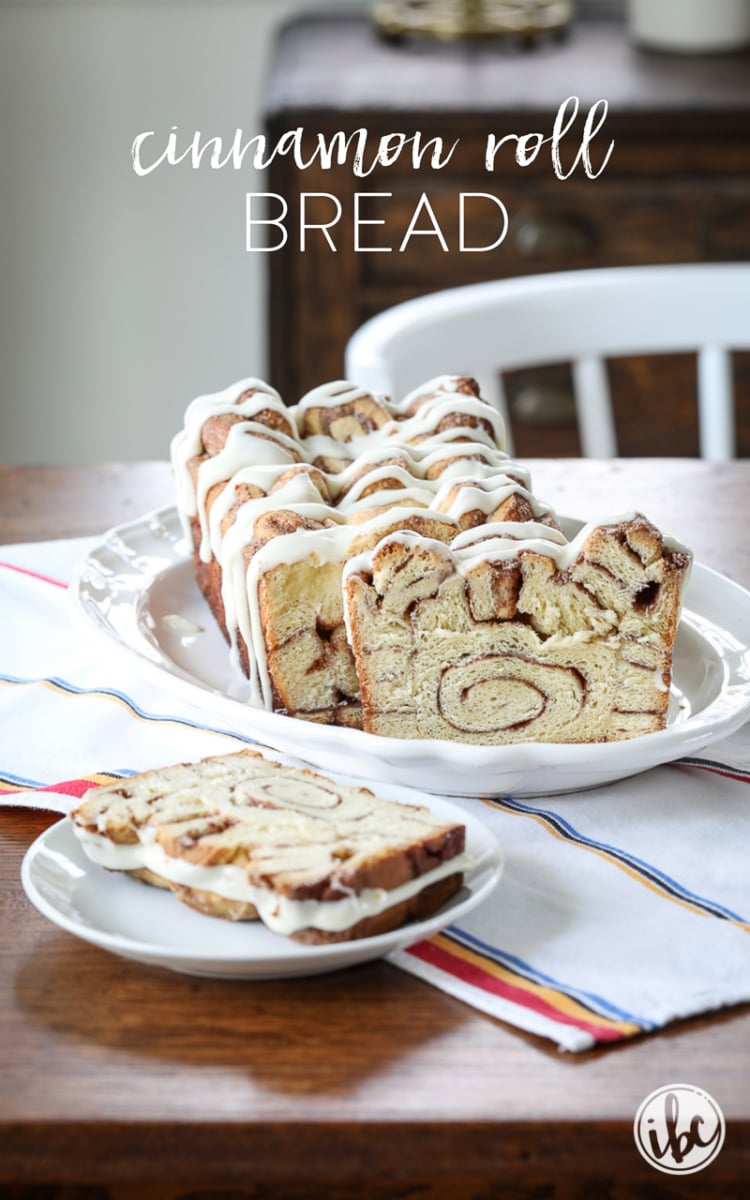 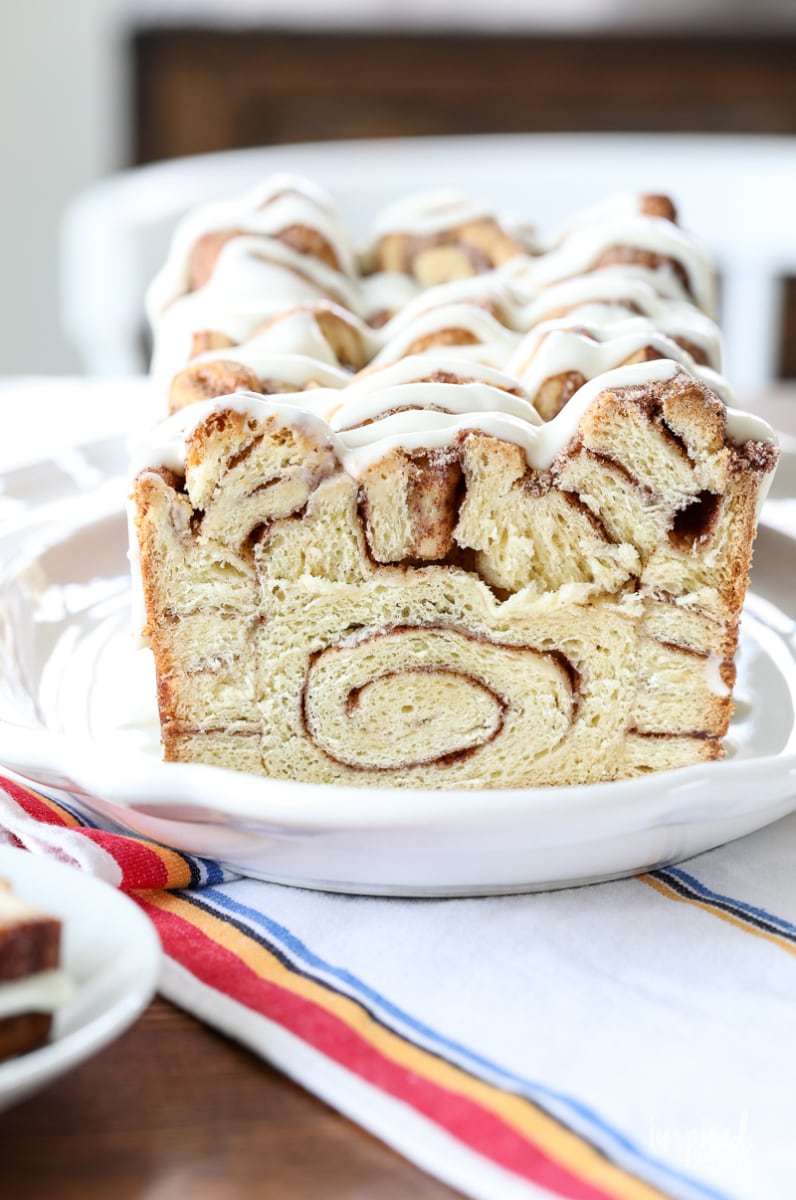 I have had a sweet tooth since I was a kid, and cinnamon rolls are way up there on my list of favorite treats. I love their taste and the memories they evoke. My mom and both of my grandmas made cinnamon rolls, and each of their versions was as delicious as the next. Occasionally, we had the store-bought tube-packed ones (because those are also yummy), but most of the time our family ate homemade cinnamon rolls. 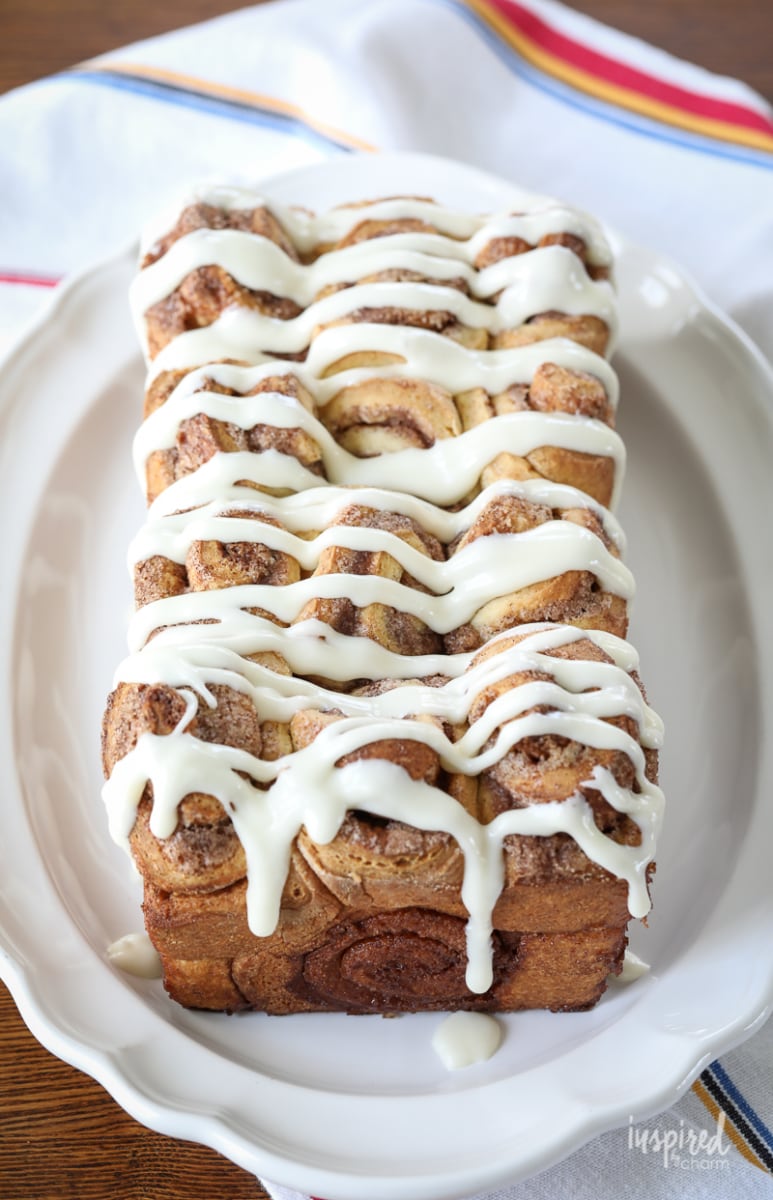 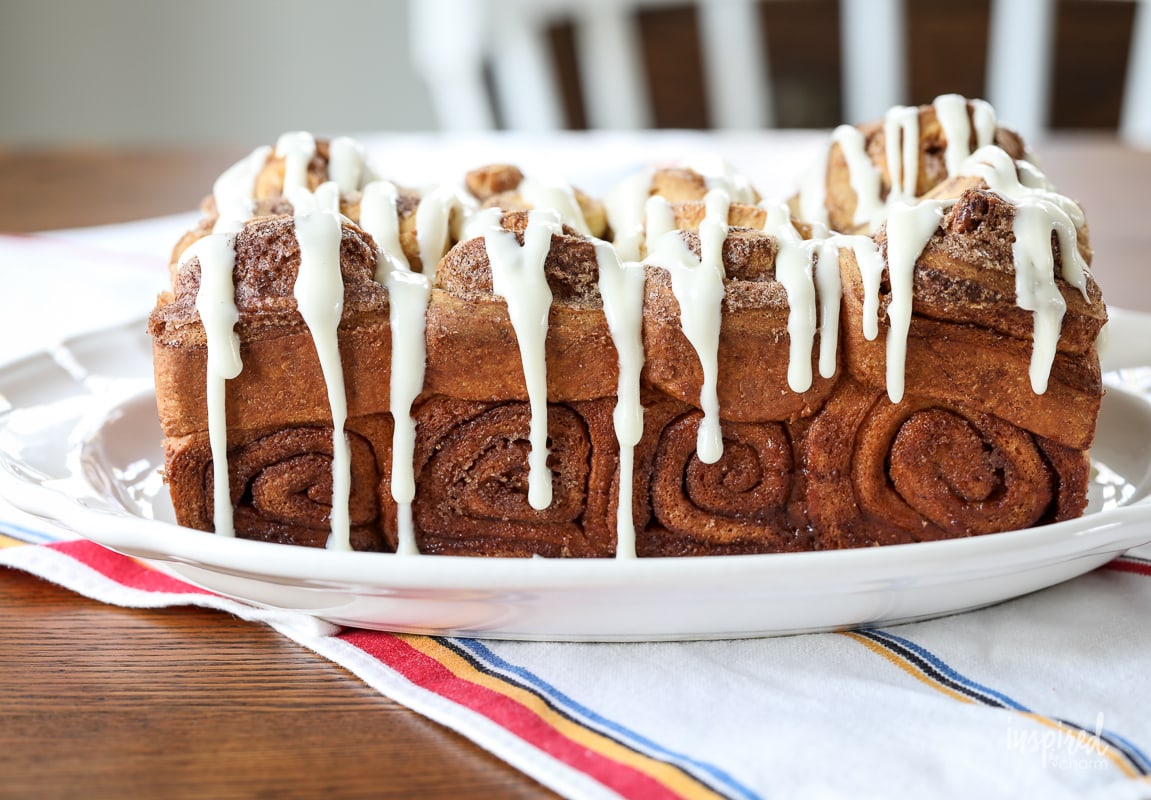 As you can see from the photos I’m sharing here, this is a wow-worthy bread. Depending on how you layer the cinnamon rolls in the pan, you can get different and unique looks.

If you’ve ever made cinnamon rolls, this recipe will be a piece of cake … er slice of bread! And don’t worry if you’re new to making cinnamon rolls; it’s not that hard. To my way of thinking, this Cinnamon Roll Bread recipe might just be a good way to dip your toe in the yeast bread waters.

Let me walk you through the steps. 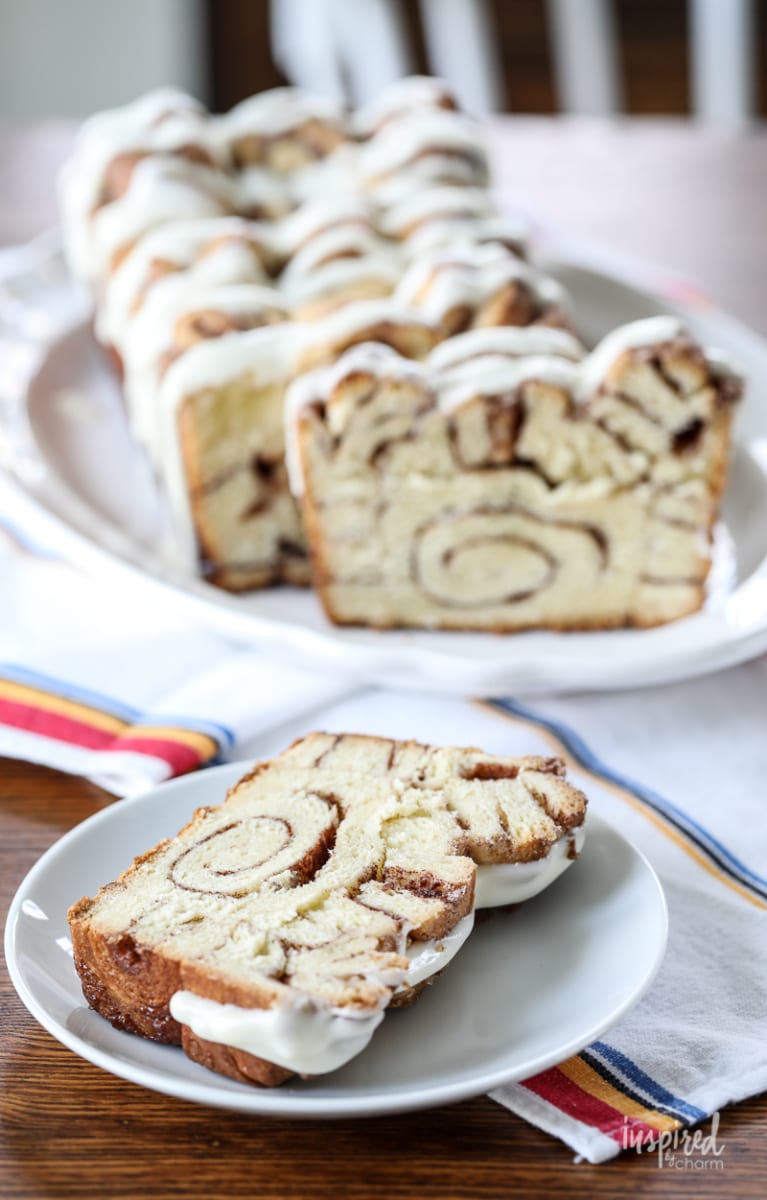 How to Make Cinnamon Roll Bread:

This is a yeast-based recipe, but don’t let that make you nervous. Once you do this a few times, you’ll quickly get over your fears. Let’s get started (A full printable recipe card with ingredients and instructions is available at the end of this post.)

1. Combine the dry ingredients. Whisk them together in the bowl of a stand mixer fitted with a paddle attachment.

2. Heat the butter, milk, and vanilla. This step is important for activating the yeast. I heat the butter and milk on the stovetop, but a microwave will work as well. Heat until it reaches 120-130 degrees F. Use a thermometer to check the temperature. If this mixture is too cold the yeast won’t activate; if the mixture is too hot, the yeast will be killed.

3. Mix the dough. Add the heated butter mixture to the dry ingredients and beat at a medium speed to combine. Then beat in the eggs and remaining flour. Before you finish mixing, switch the mixer attachment to the dough hook. 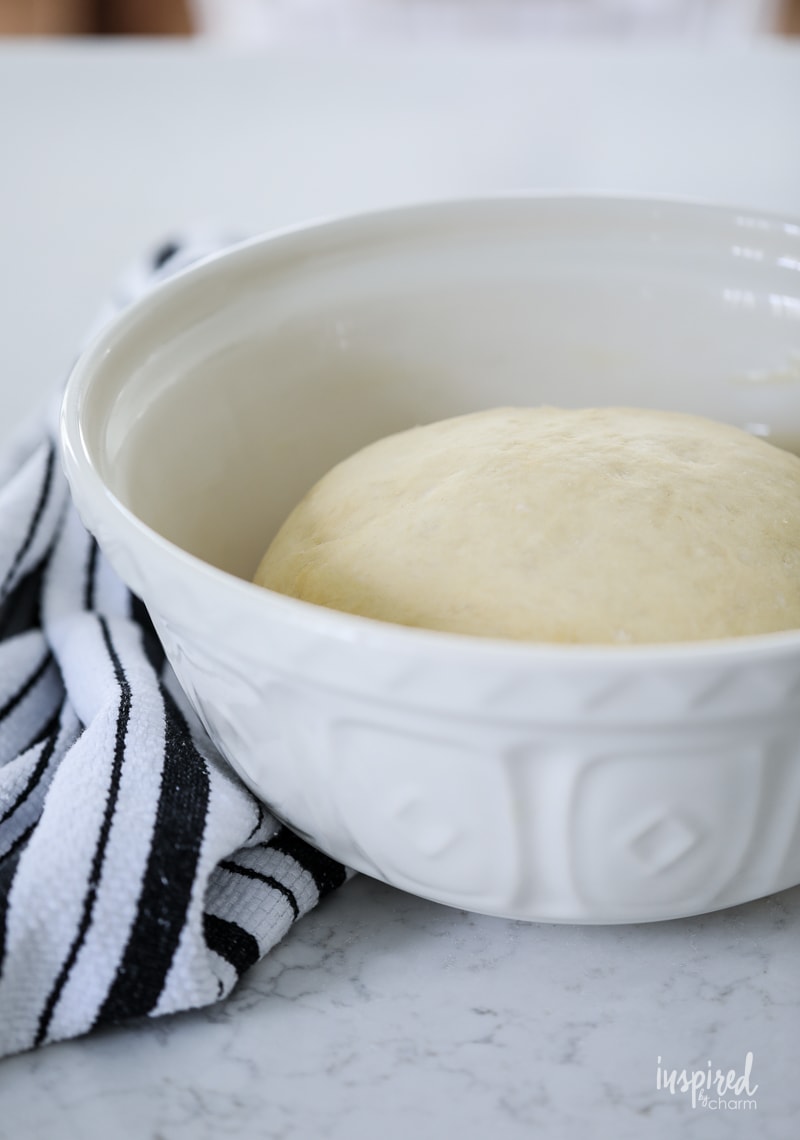 5. Mix the cinnamon sugar filling. In a small bowl, whisk together cinnamon, sugar, and salt. Set aside. Also prepare a 9×5-inch loaf pan. I recommend lining it with parchment paper for easy removal of the bread. I use one piece that covers the bottom and long sides of the pan. pray everything with a baking spray. Then set aside. 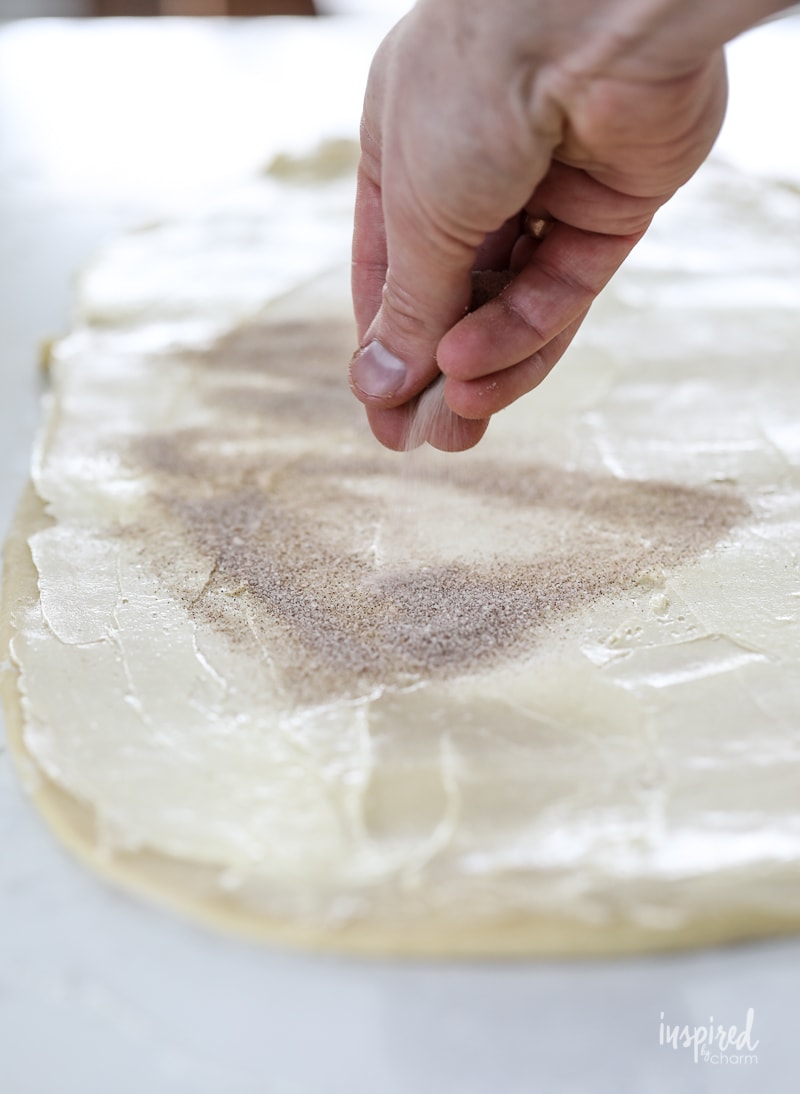 6. Make the cinnamon rolls. Once the dough has doubled in size, roll it out on a lightly floured surface into a 26×7-inch rectangle. Spread softened butter on the dough with a spatula; then sprinkle that with the prepared cinnamon and sugar mixture. Roll up the dough lengthwise and pinch to seal the ends. Slice into 26 1-inch slices. 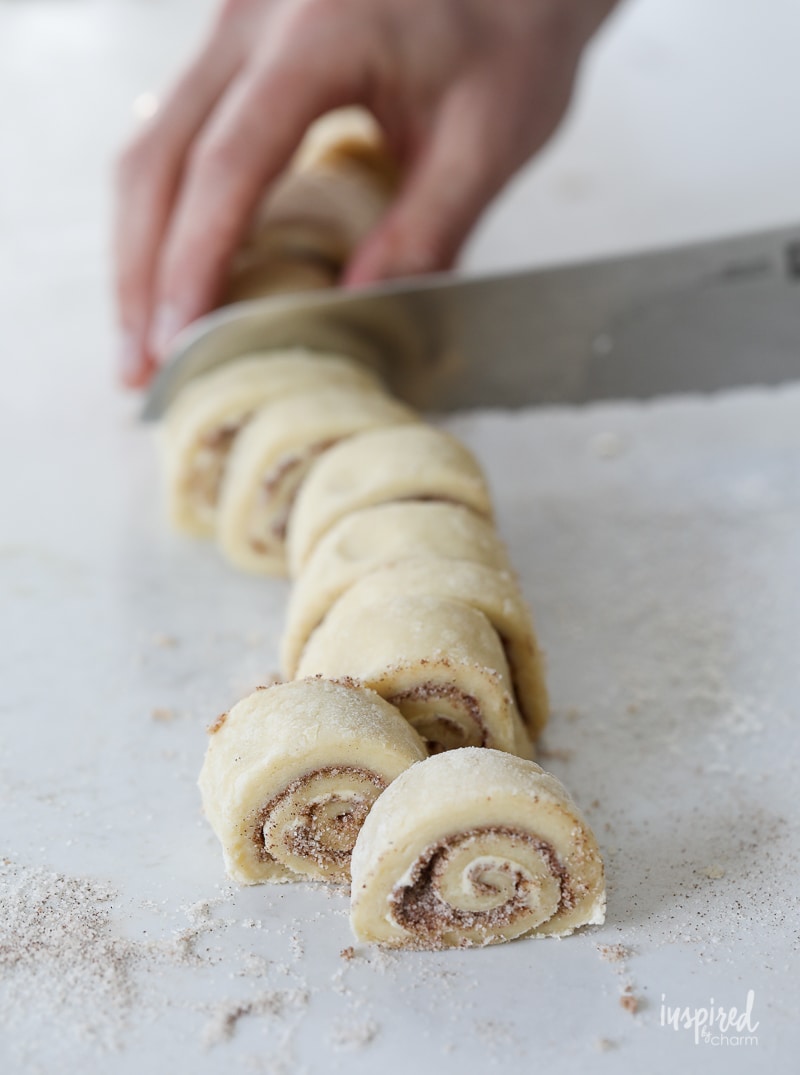 7. Assemble bread. Next, fill the prepared loaf pan with the cinnamon rolls. The photos show how I arranged my cinnamon rolls. I think a more random approach could result in a unique look, too! 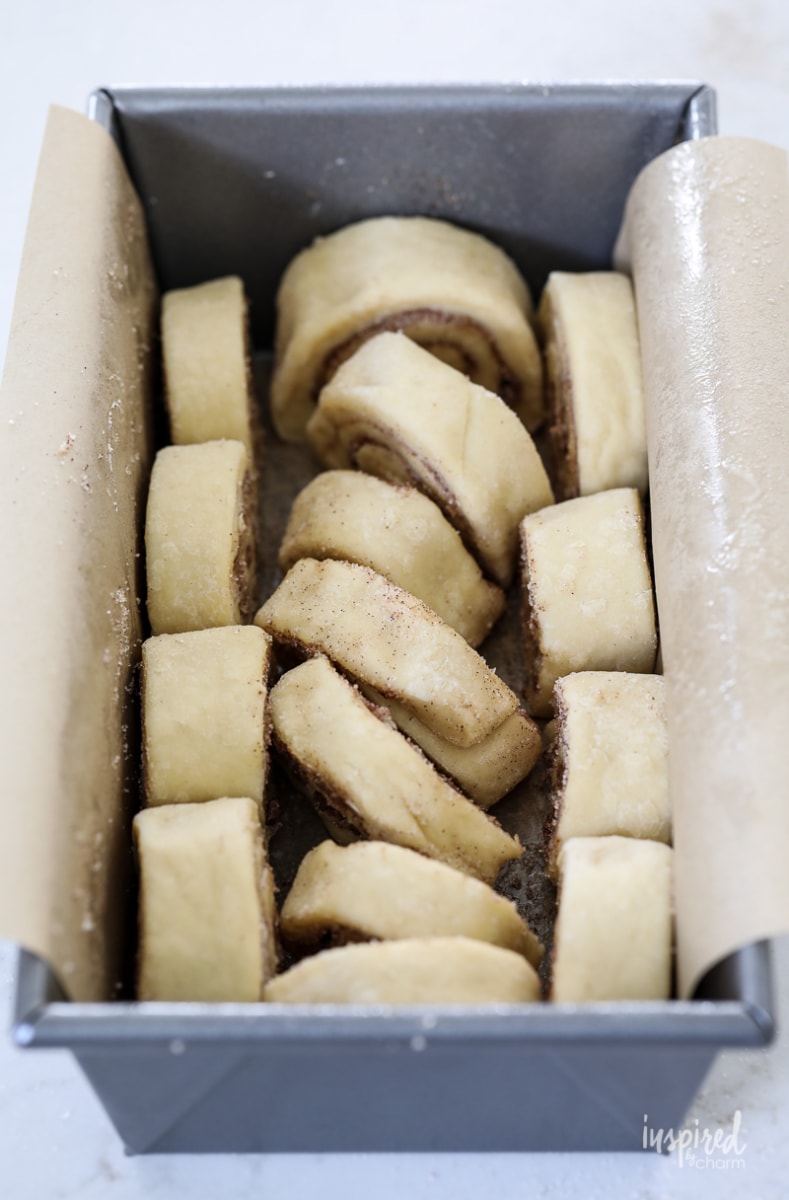 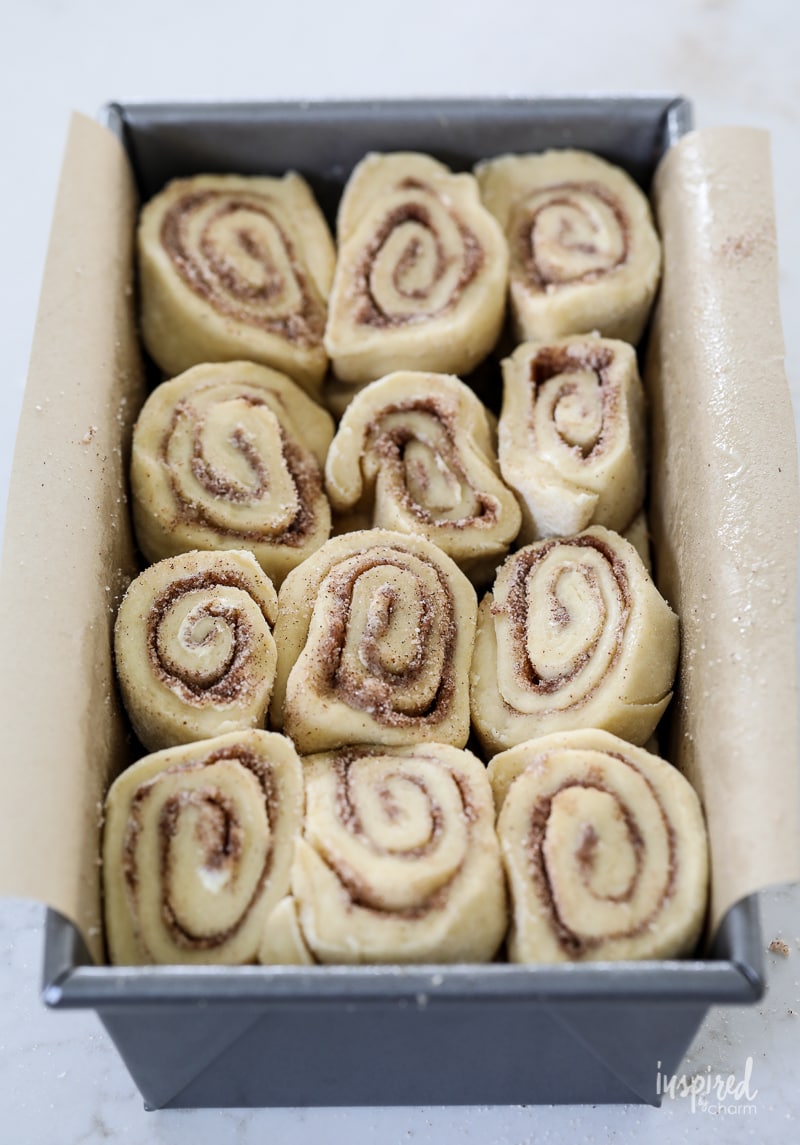 8. Let the bread rise. Cover the loaf pan with a towel and set it in a warm place so the bread can rise for about 45 minutes. In the meantime, preheat the oven to 350 degrees F.

9. Bake. Once the bread has risen, bake it until golden. This will take about 55 minutes to an hour. 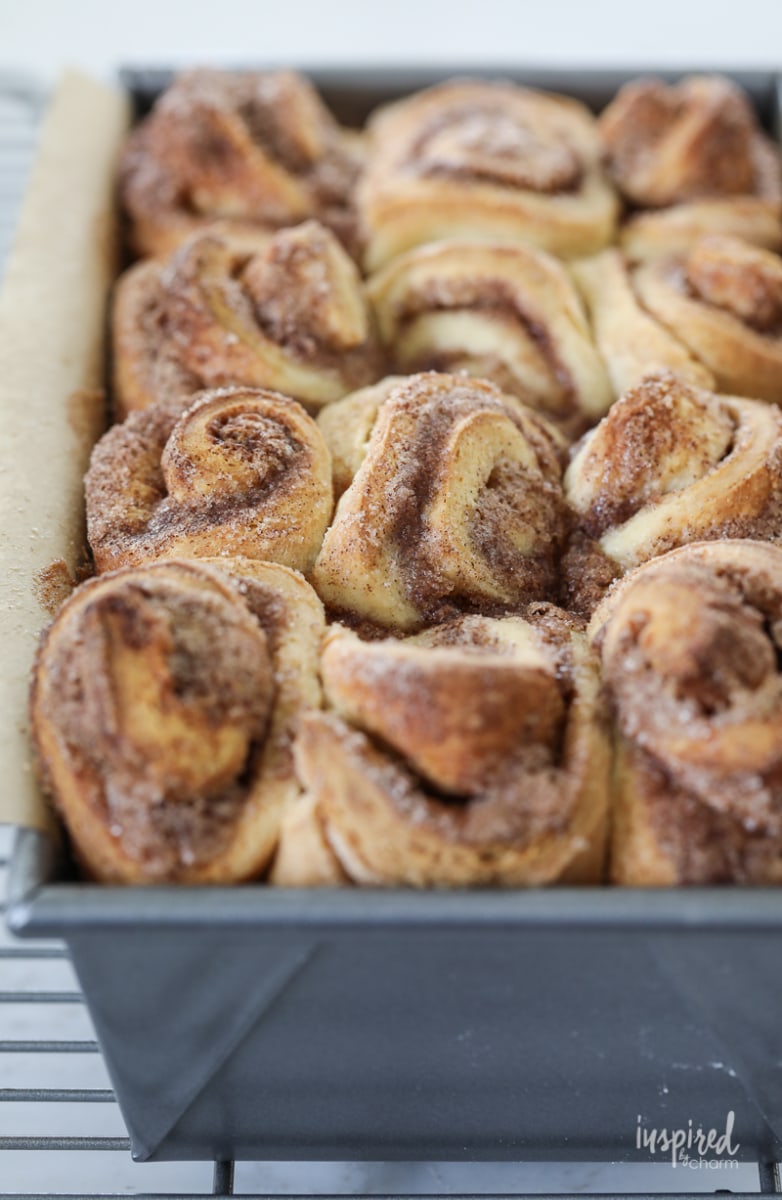 10. Make the glaze. While the bread bakes, prepare the glaze by whisking together the ingredients until smooth. (I recommend using an electric hand mixer for the smoothest results.)

11. Serve. Let the bread cool in the pan for at least 10 minutes. Then remove and drizzle with the glaze. Serve the bread warm or at room temperature. 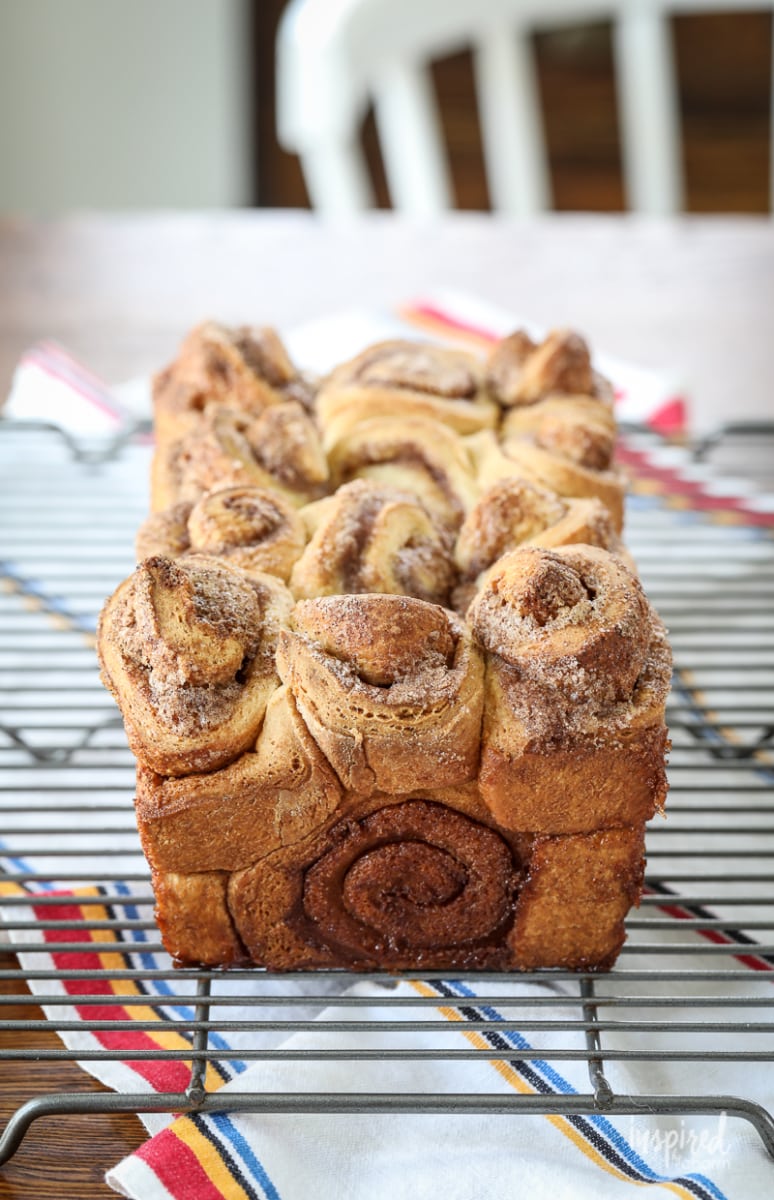 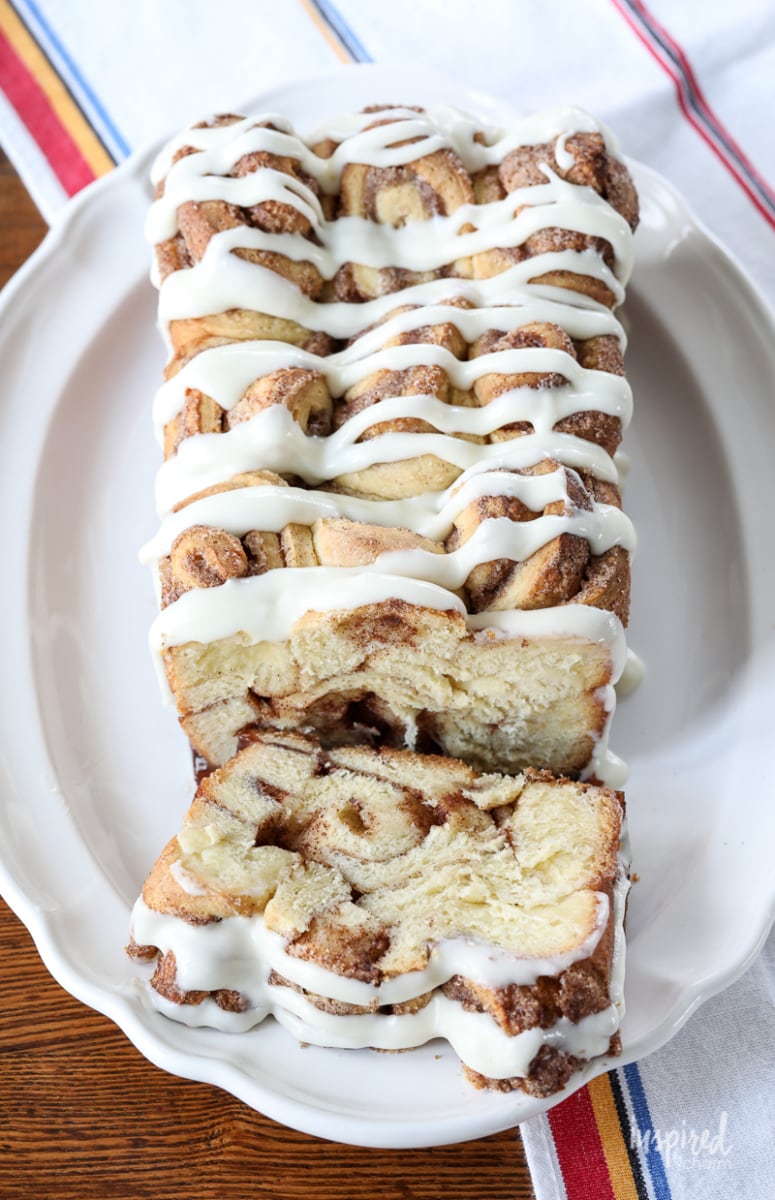 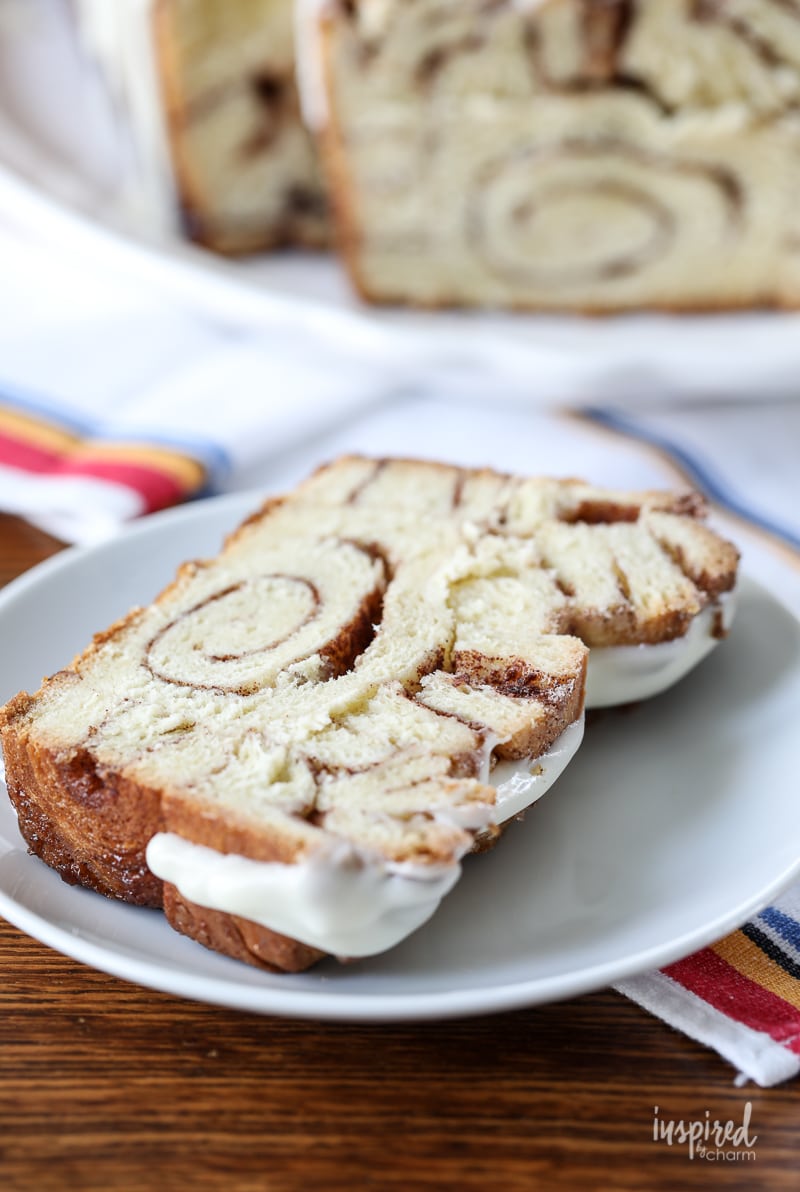 And just like that, the Cinnamon Roll Bread is done and ready to be enjoyed. As I mentioned above, any yeast-based recipe does seem a little intimidating because of the number of steps and need to pay attention to temperatures. Still, I think this comes together fairly easily. 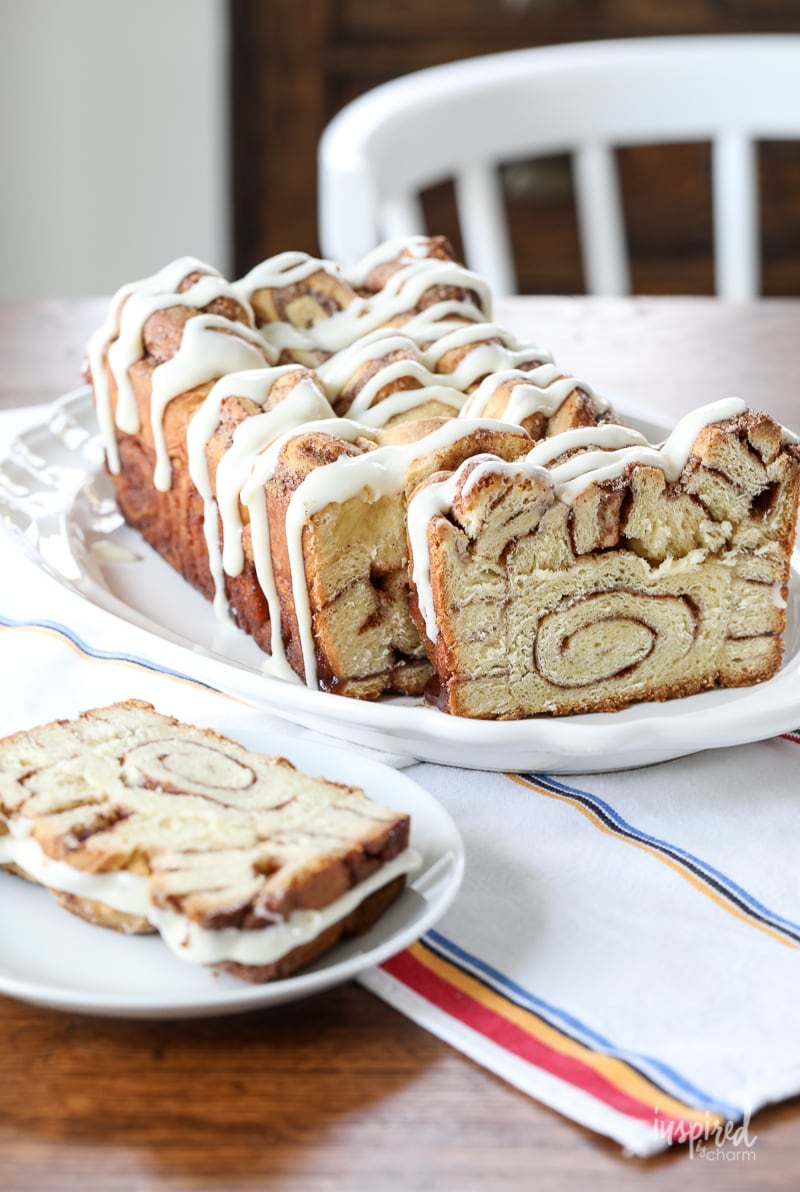 You can serve this Cinnamon Roll Bread like you would monkey bread and just pull off one cinnamon roll at a time. Or you can slice it the way I did. The bread is delicious no matter how you choose to serve it!

Cream cheese glaze or cinnamon butter make the perfect topping! Enjoy the bread and your baking! 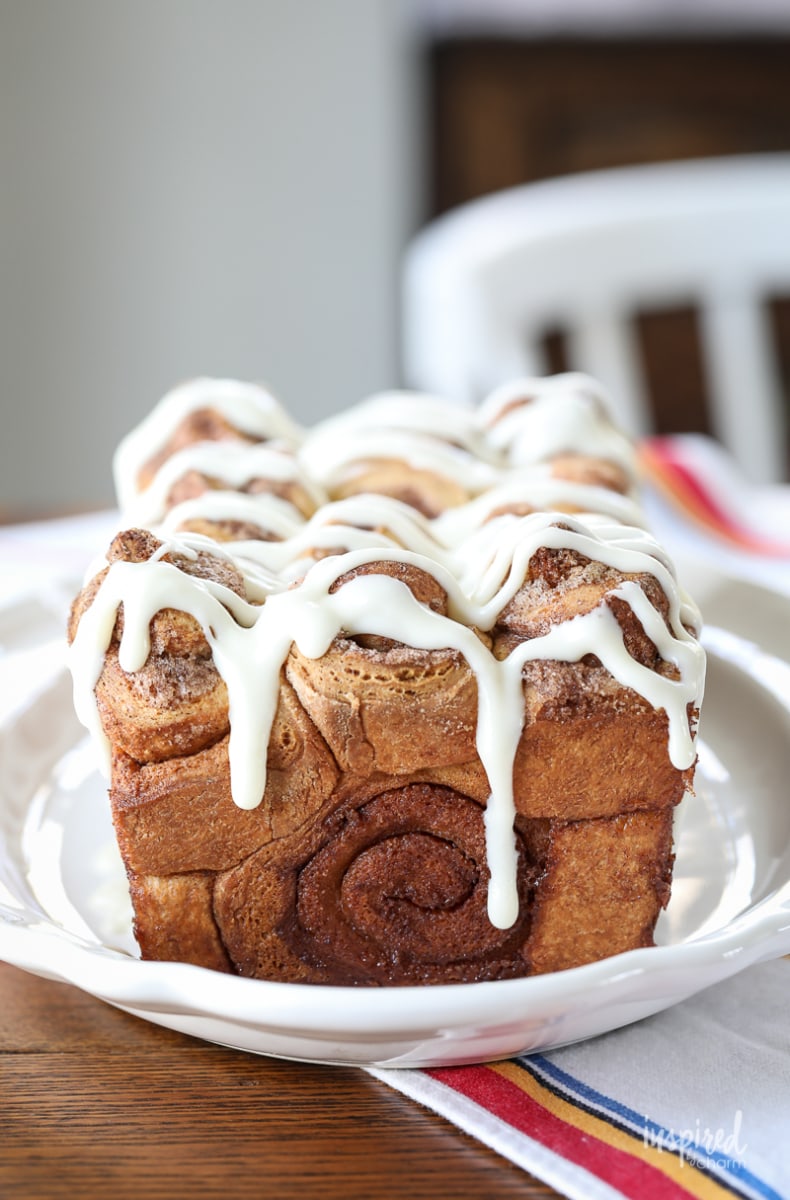 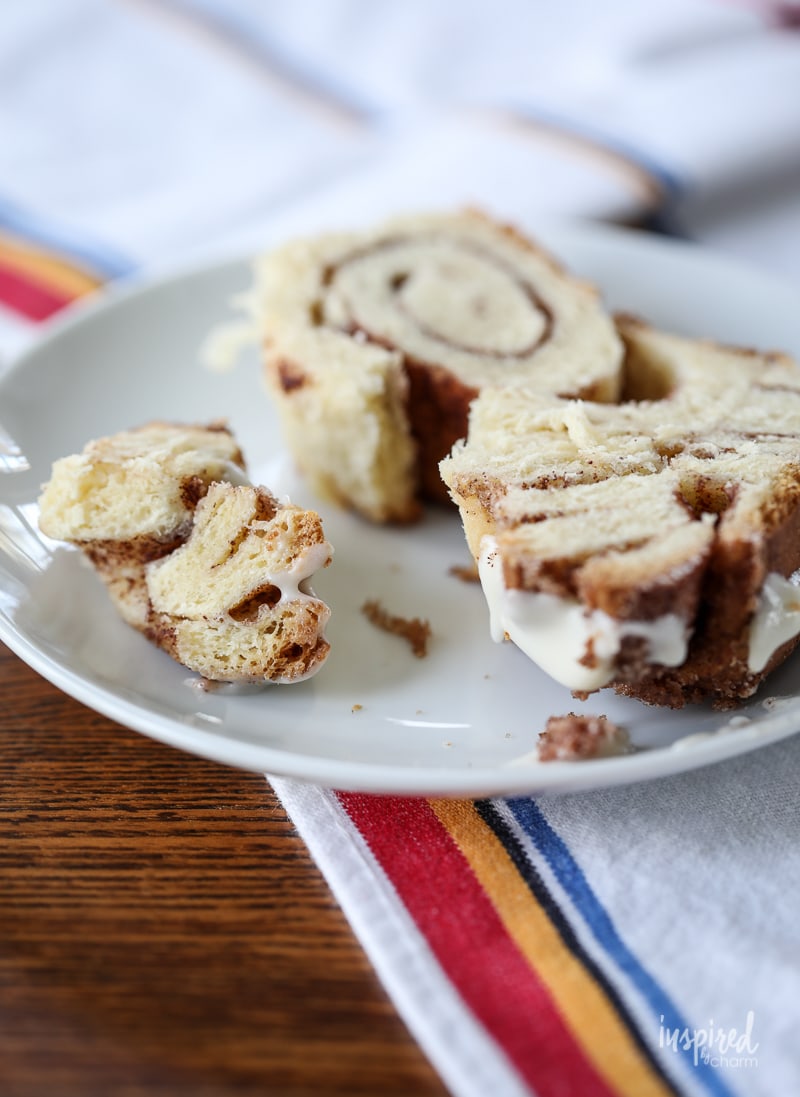 Want More from Inspired by Charm?

I’m so happy you are here! Are you looking for more ways to create your happy place? Be sure to join the IBC Mailing List so you never miss a thing. You can also find me on social media for daily updates.

Have you made an IBC recipe you love? Follow me on Instagram. Share YOUR dish with #myIBC and tag @inspiredbycharm so we can see your delicious creation. 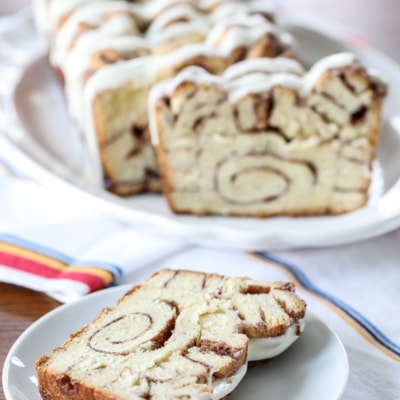 Pin It!
This Cinnamon Roll Bread is a classic sweet baked in a new way. Cinnamon rolls are packed into a loaf pan to create a delicious bread that's swirled with cinnamon and sugar and topped with a cream cheese glaze.
Print

Recipe adapted from Bake from Scratch