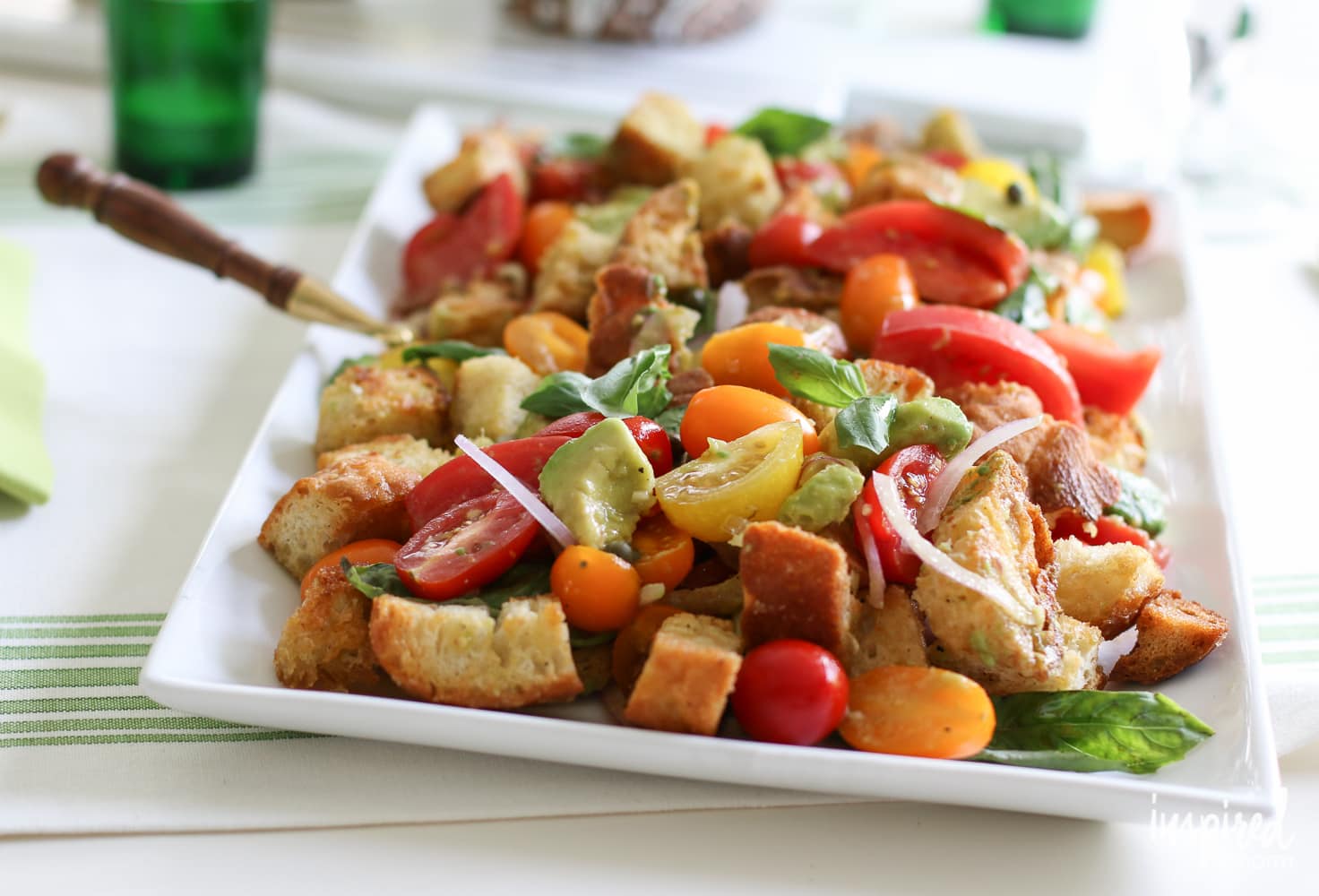 This Avocado Panzanella Salad is a celebration of summer! Bursting with summer tomatoes, crusting bread, fresh basil, and creamy avocados this salad is a winning recipe!

It’s hard to believe that summer is almost over. For me, this time of year is bittersweet. As much as I hate to see summer go, there’s also so much to love about the season to come. One thing I particularly like about this time of transition is the harvest. Local farms and markets are loaded with delicious, fresh fruits and vegetables at the peak of ripeness. Inspired by the harvest and with a farewell nod to summer, today I’m making an Avocado Panzanella. 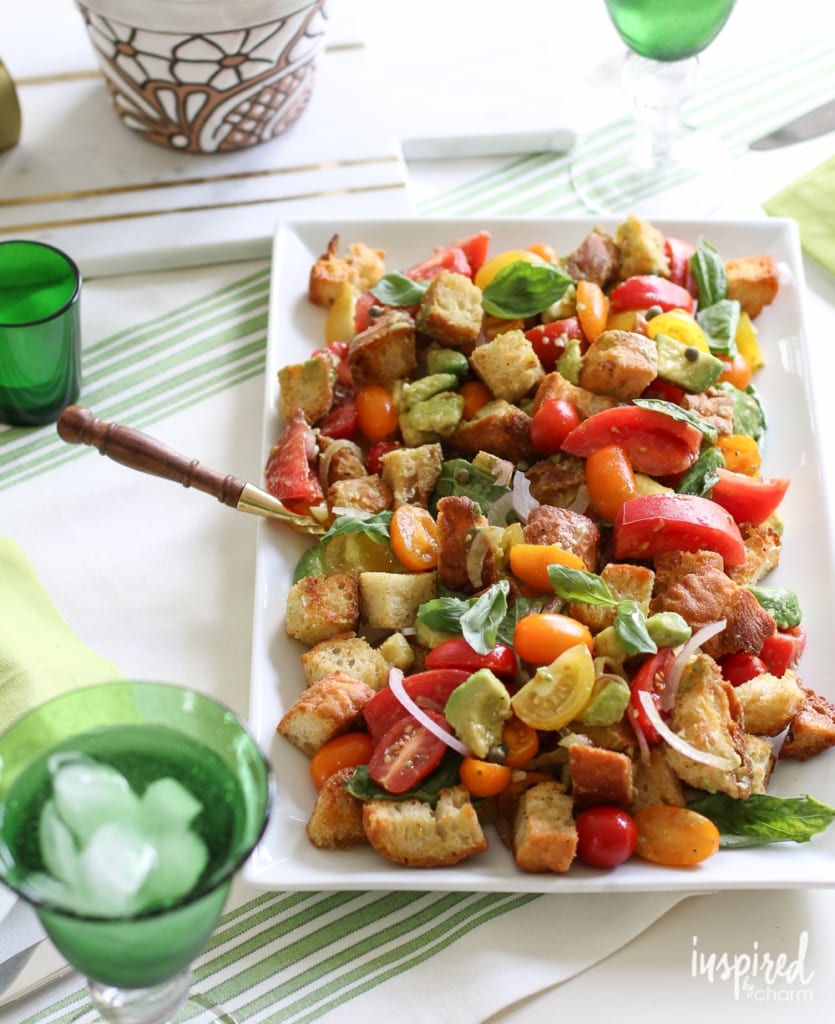 I love me some panzanella. If you’re not familiar with the dish, it’s a Tuscan salad of bread and tomatoes that’s typically served in summer. Chunks of day-old bread and tomatoes are mixed with onions and basil and dressed with olive oil and vinegar. Not surprisingly, the dish has evolved over the years and other ingredients have been have been added – cucumbers, olives, capers, and / or cheese (mozzarella to be specific.) 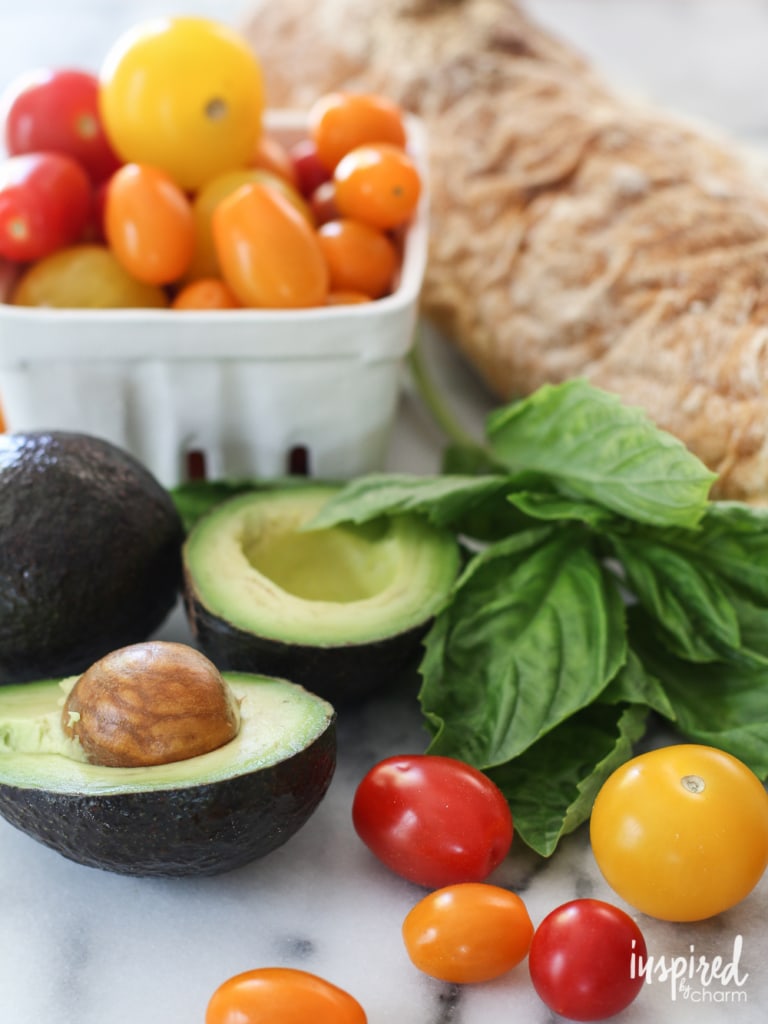 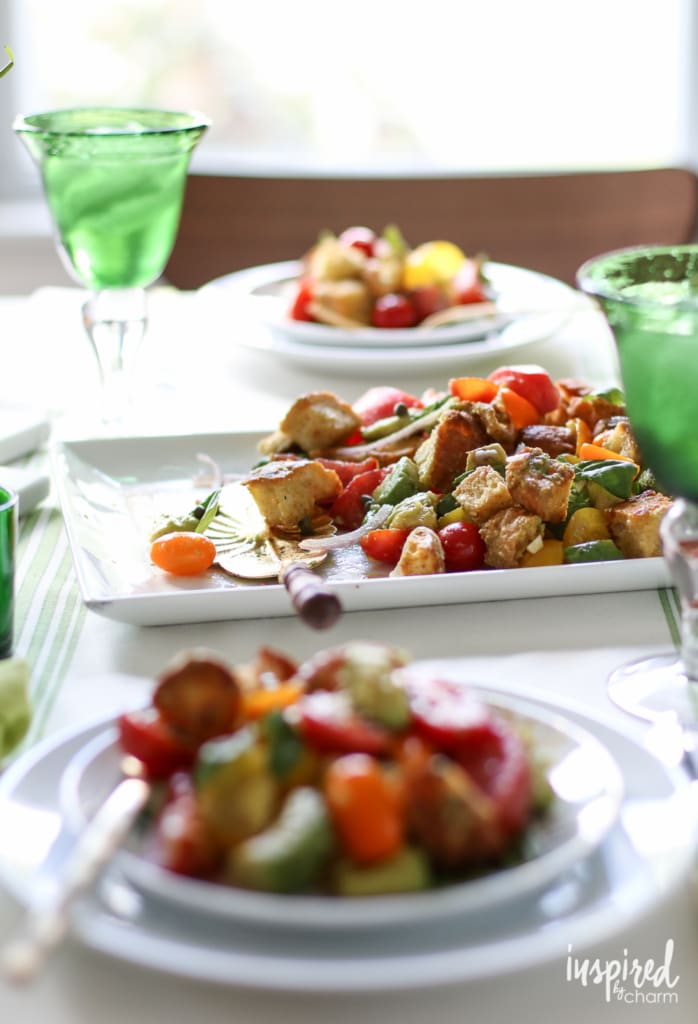 Given their creamy texture, unique flavor, and bold green color, I thought avocados would make an excellent addition to traditional panzanella.

They are also packed with nutrients, and since they are grown in America, they are perfect for my harvest-inspired salad. 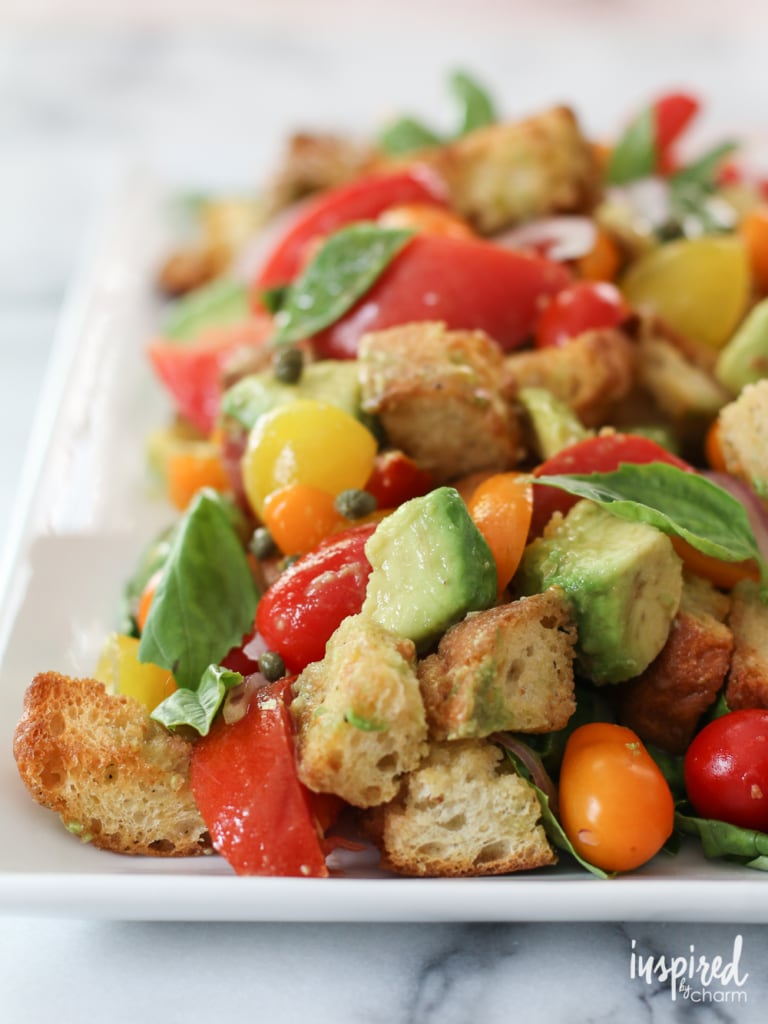 How to Make Avocado Panzanella:

To start, panzanella needs some crusty and crunchy bread. I like to use ciabatta.

Roughly cube the loaf into 1-inch pieces. After lightly coating the bread cubes with olive oil and salt and pepper, toast them in the oven. This process will enhance the flavor, add crunch, and help the bread cubes hold up to the dressing. 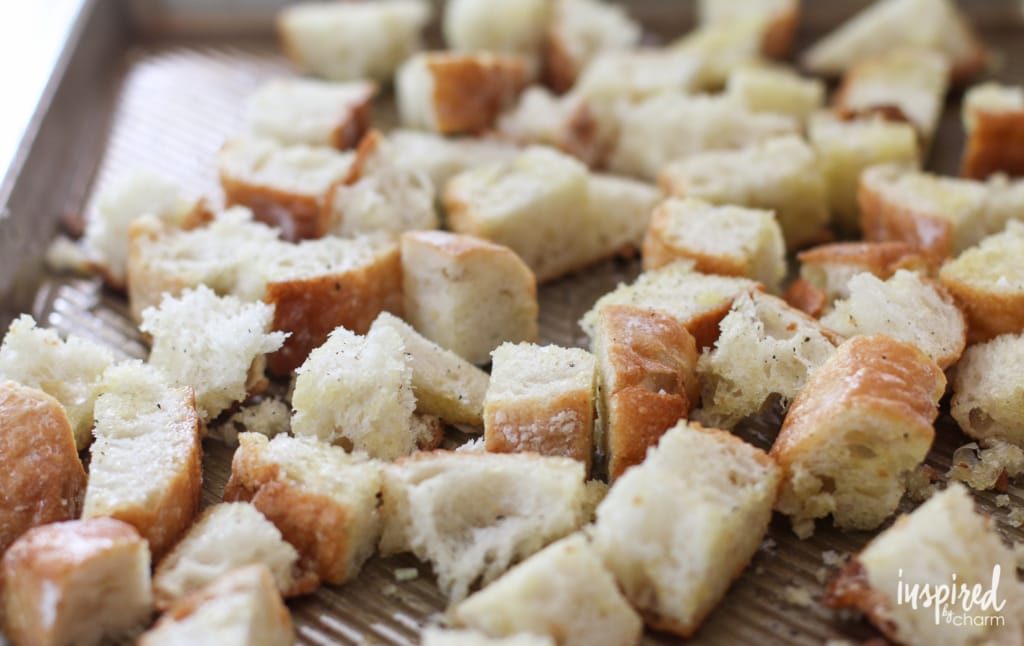 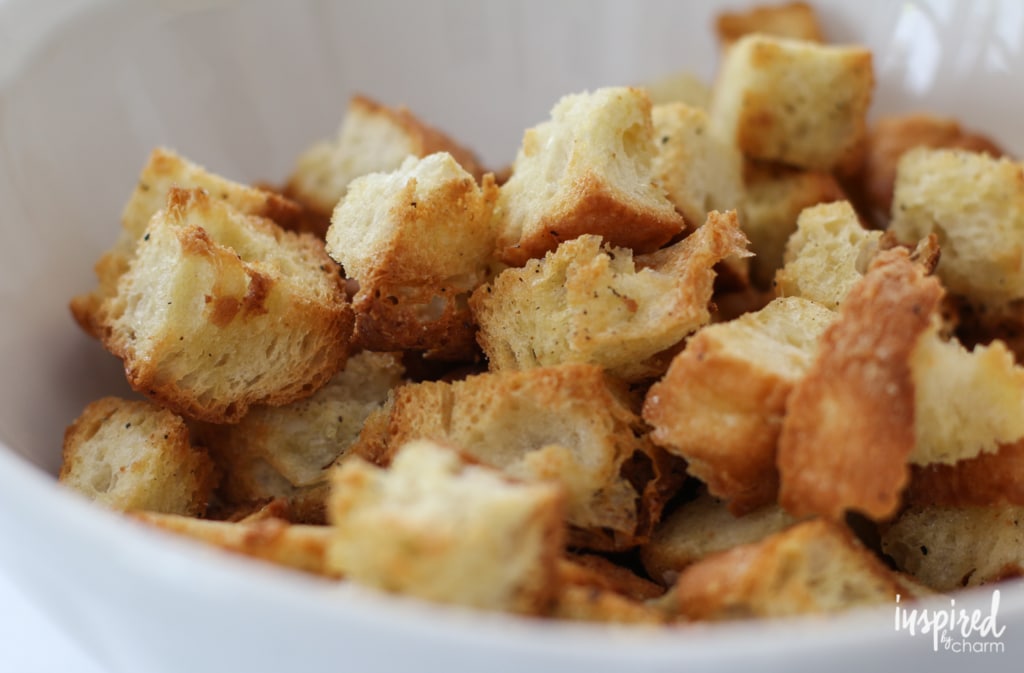 While the bread is in the oven, prepare your harvest salad. Start with the tomatoes. I like a variety of colors and sizes. Chop them up and add them to a large bowl.

Next, it’s time for those California avocados. Remove the stone from each, peel and chop them, and then toss them in with the tomatoes. 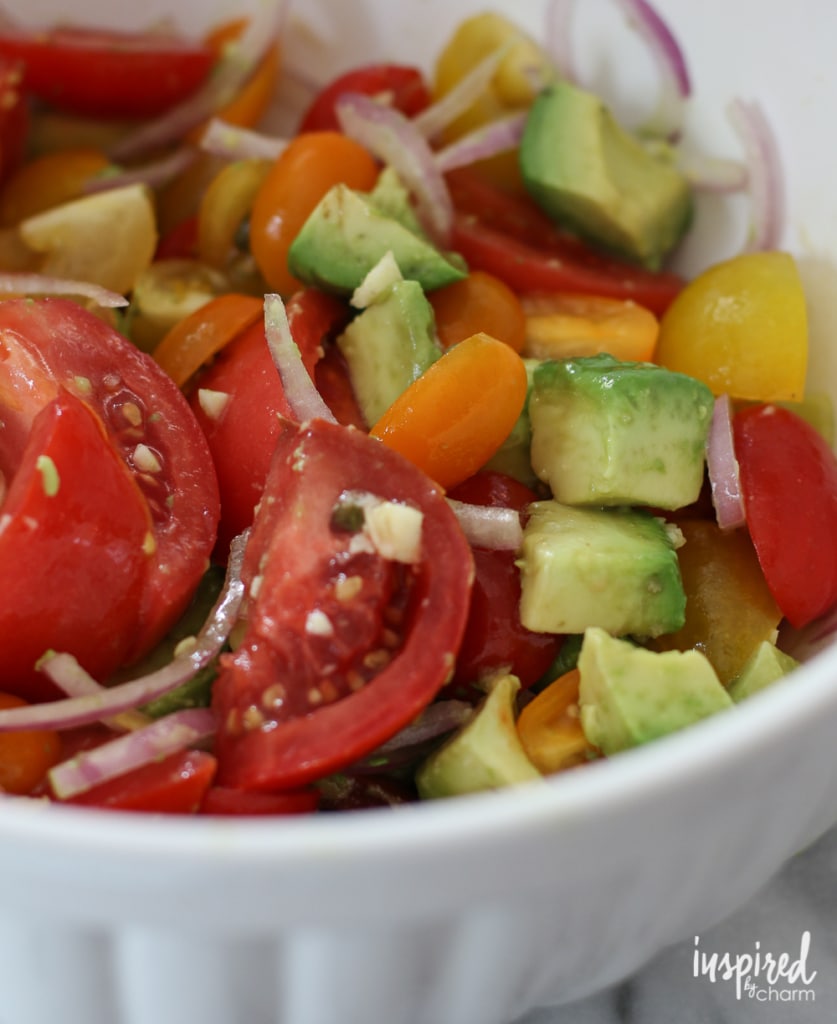 For this panzanella, I also recommend adding capers, red onion, and basil. To me, this is an ideal combination. However, feel free to toss in whatever you like.

At this point, your cubed bread should be perfectly toasted. Remove it from the oven and allow it to cool. 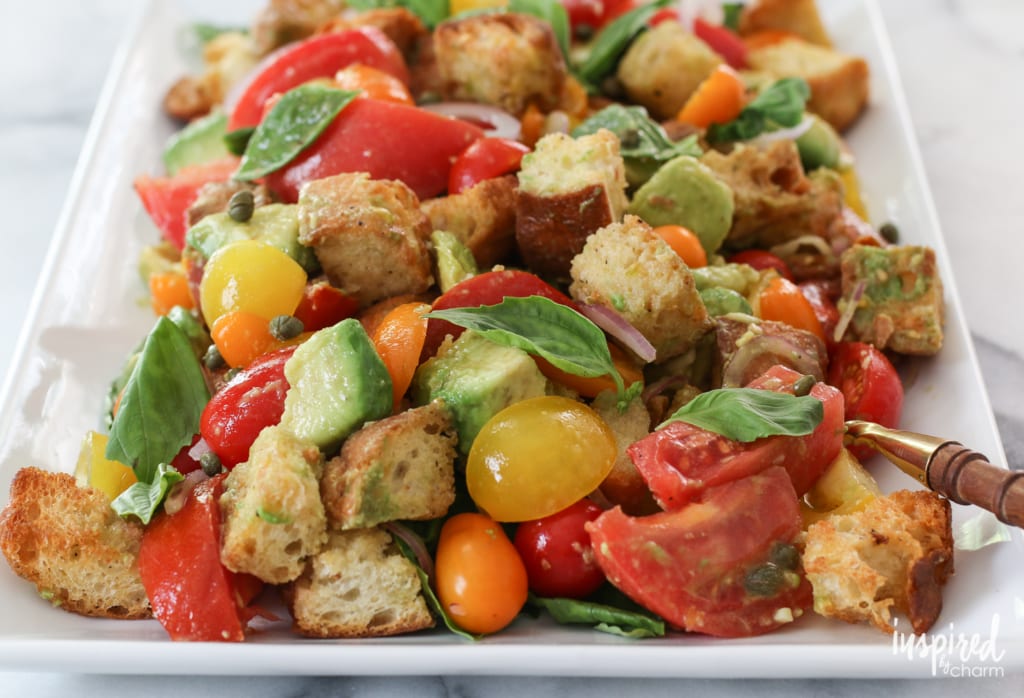 To make the dressing, just whisk together red wine vinegar, olive oil, garlic, salt, and pepper. Add the cooled bread cubes to the vegetables and toss with the dressing.

Voila! Your Avocado Panzanella is ready for dinner! 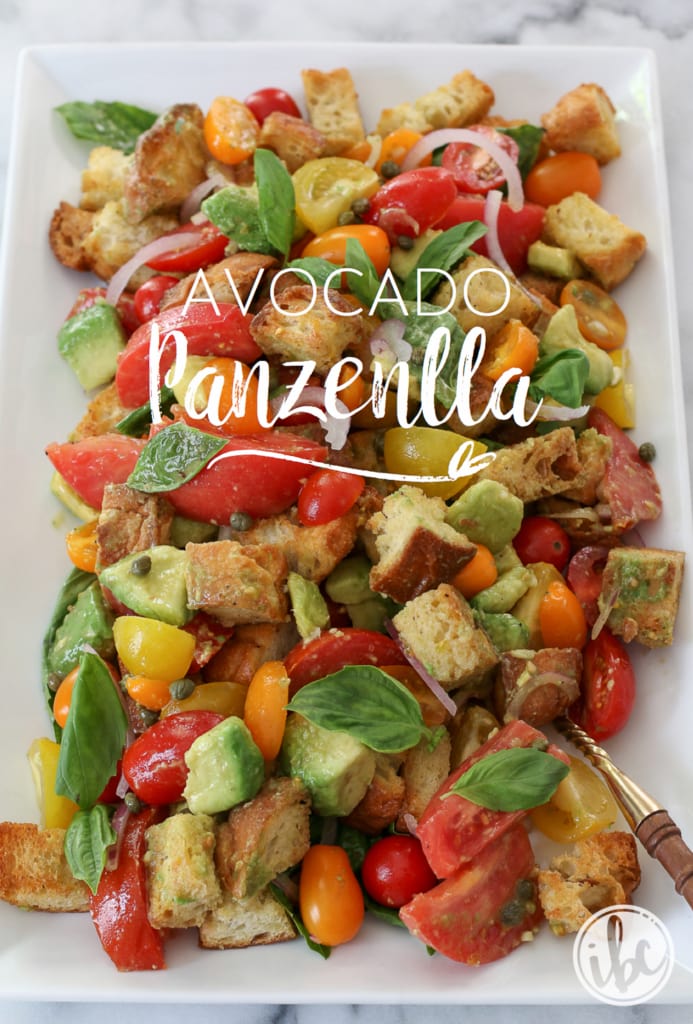 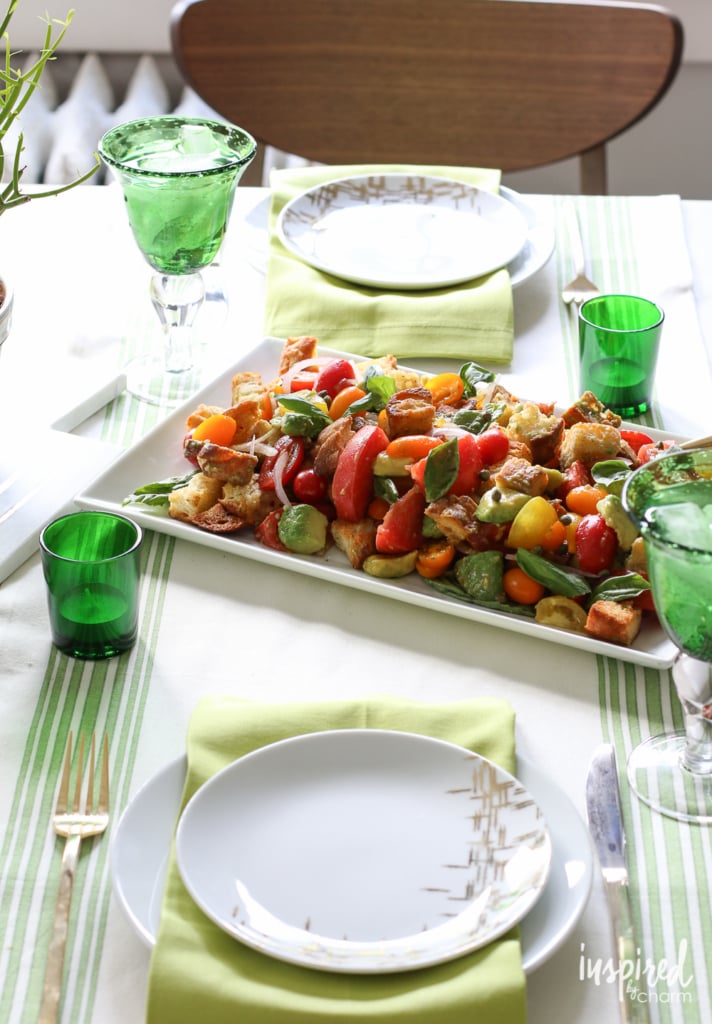 As you can tell, this is a beautiful and flavorful way to celebrate a wonderful season.

For my tablescape, I used the color green for inspiration. If you’ve been following IBC for any time, you probably know that one of my tips for entertaining decor is: Start with a color scheme.

Naturally, I had to use a bit of gold, too. I just couldn’t resist. 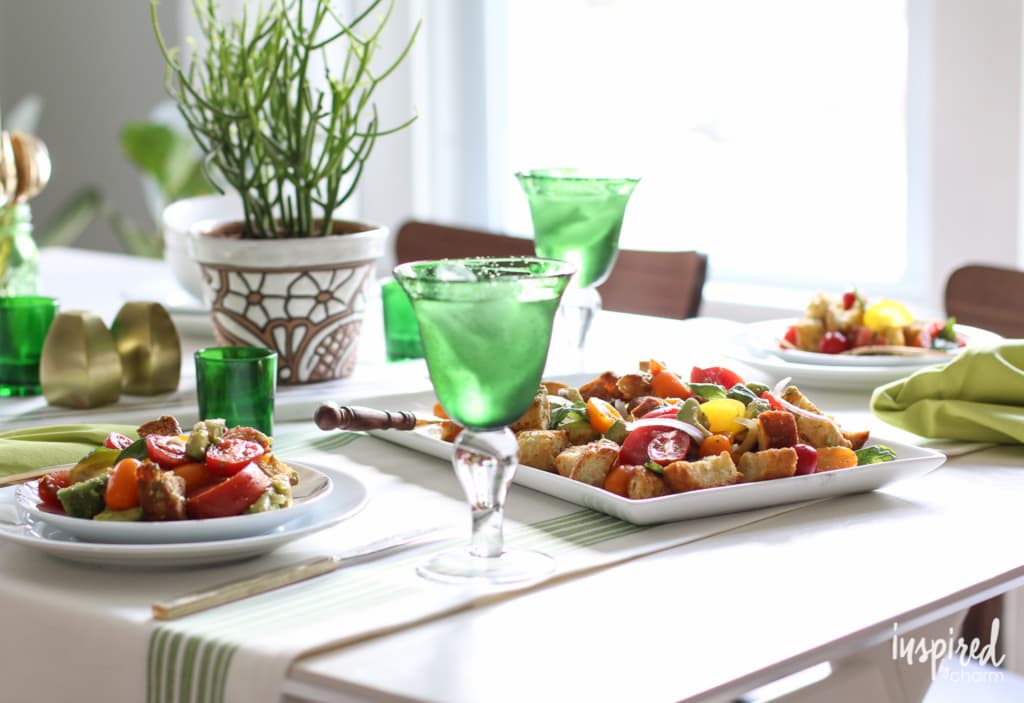 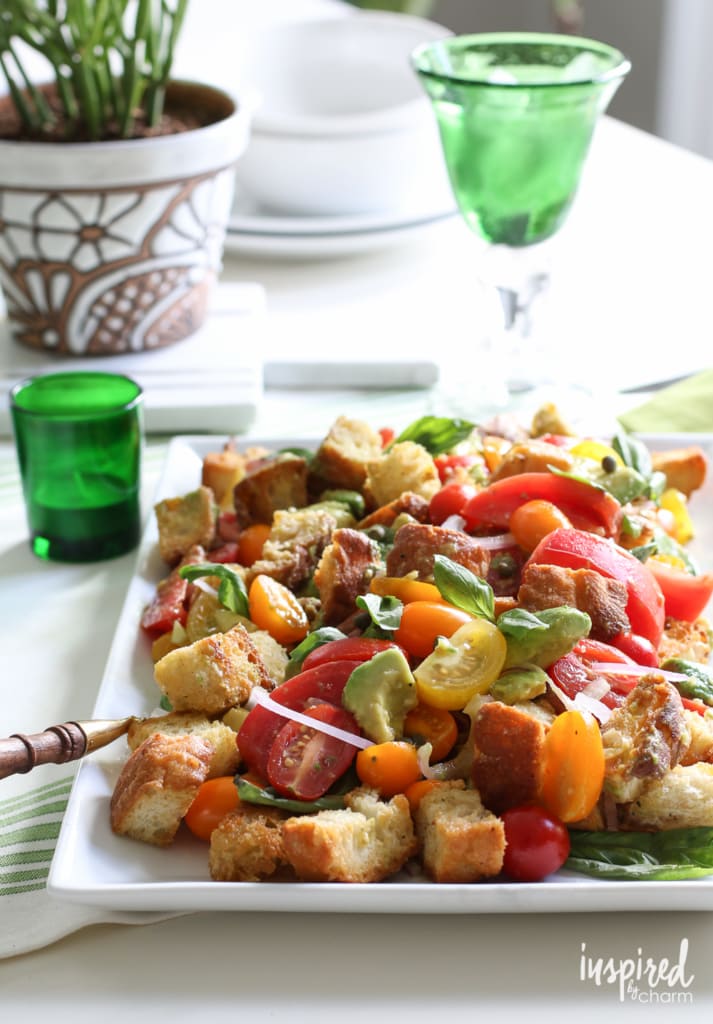 While this table is set for two, you could repeat the pattern for as many guests as you’ve invited.

I sometimes like using a table runner in the opposite direction so that it serves as a two-person placemat rather than a traditional table runner. 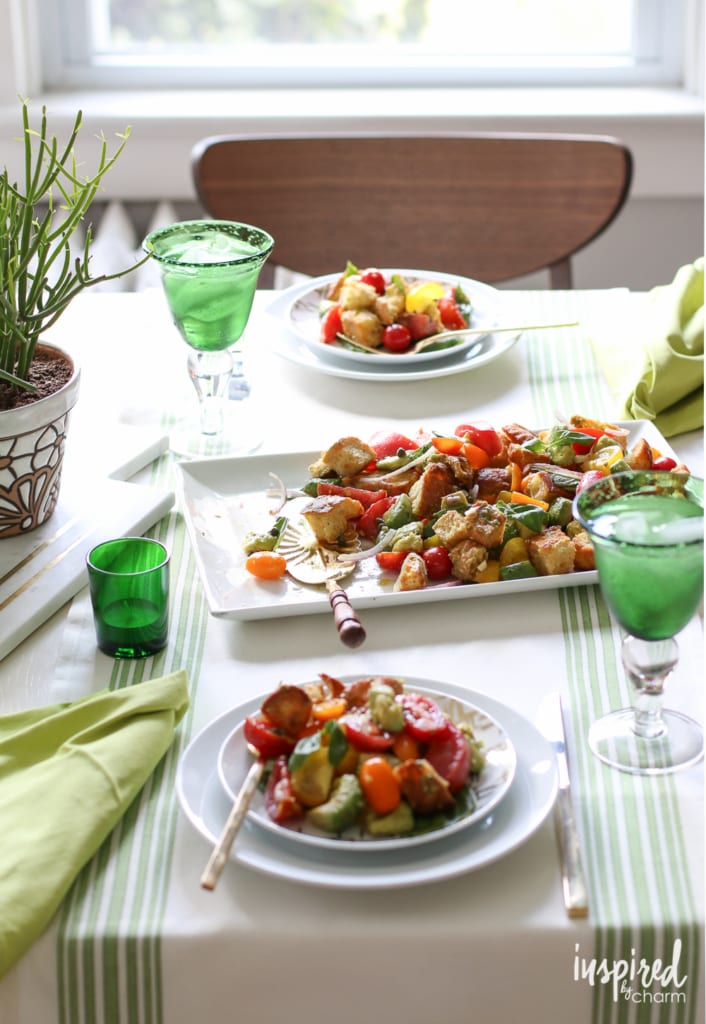 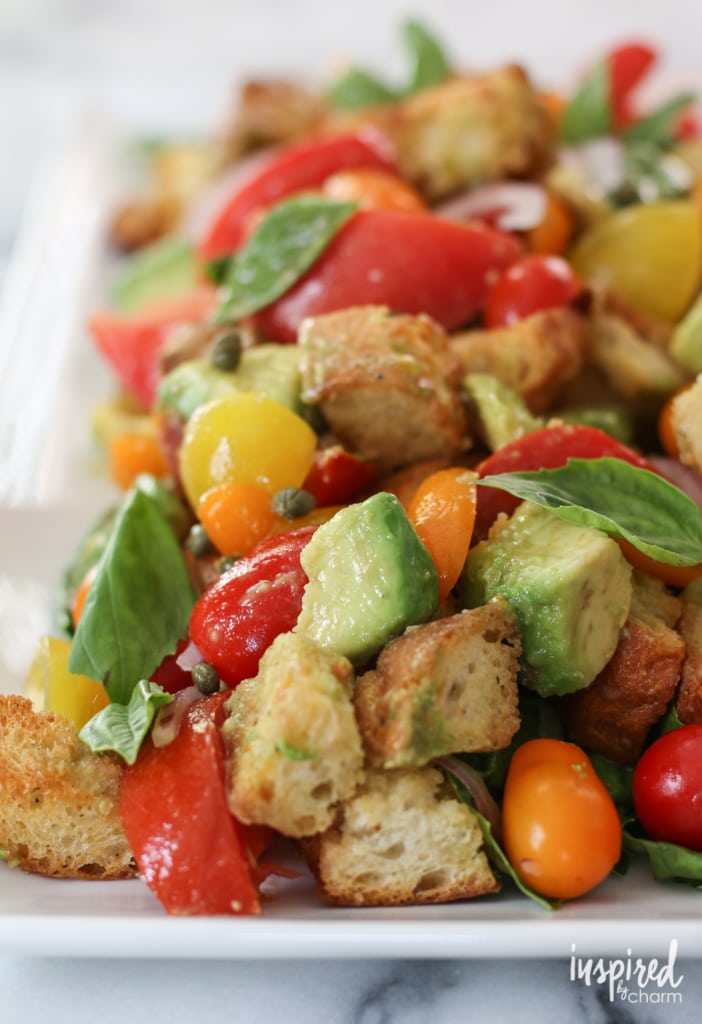 For a botanical element, I opted for a tall succulent in an ornate pot. It adds a bit of character and texture and is a nod to both California (the succulent) and Tuscany (the clay pot). I also like how it ties in with the Avocado Panzanella, which likewise blends the two locations. 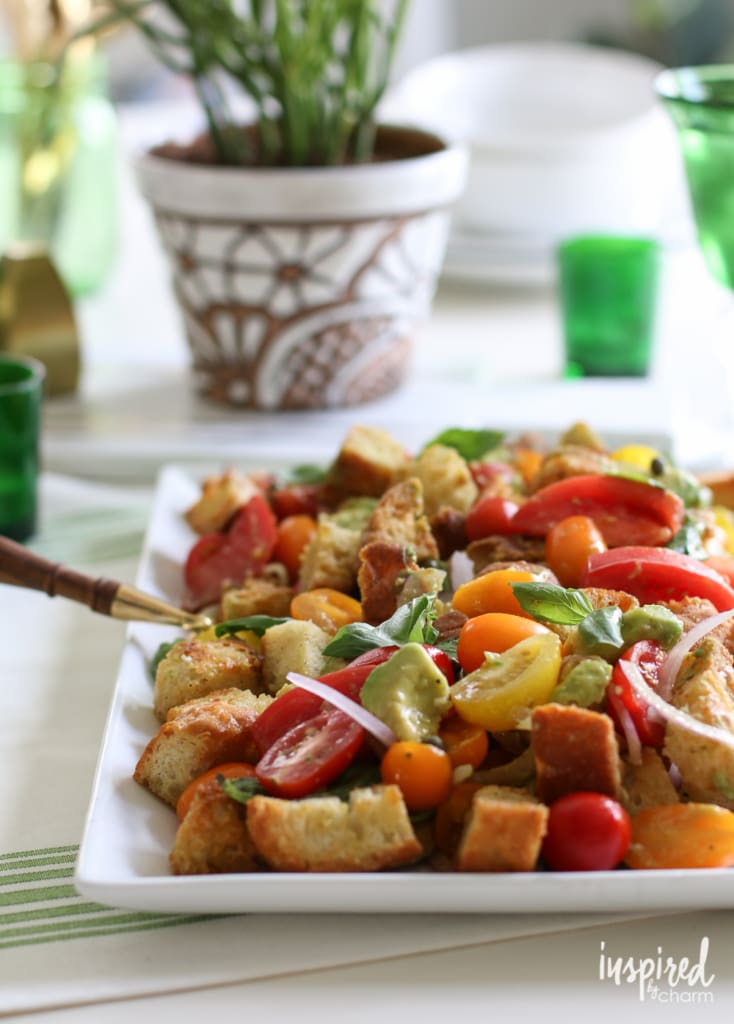 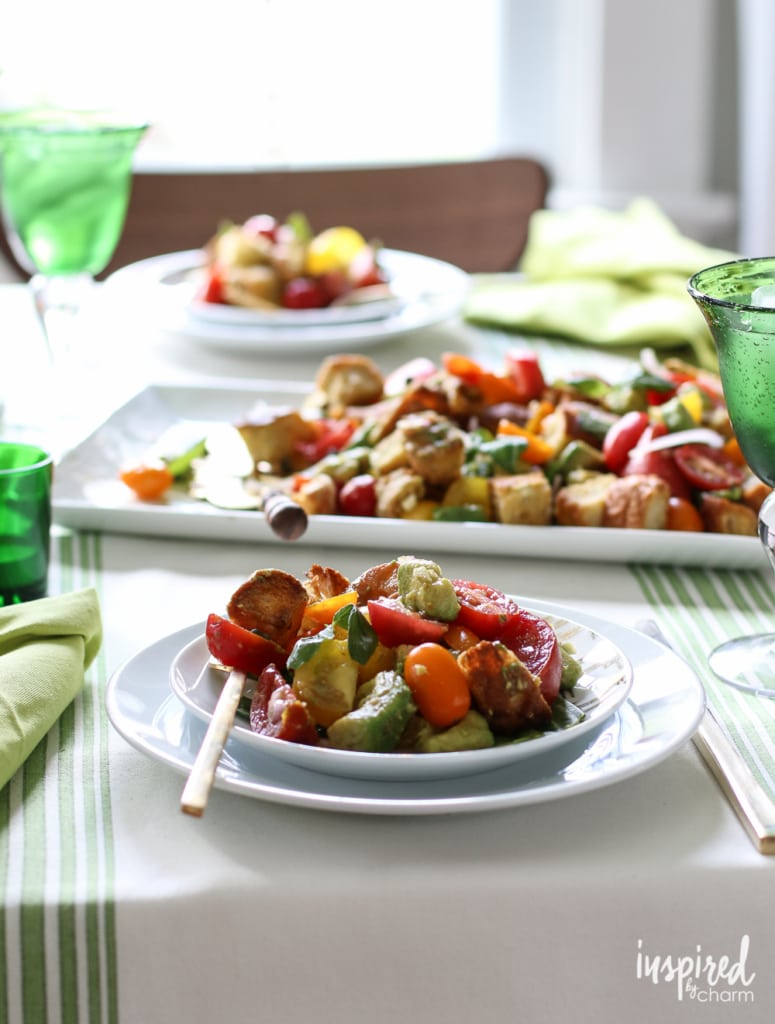 How’s that for fancy?

I hope you’re feeling inspired to take advantage of your local harvest, delicious California avocados, and a beautiful tables cape. Why not get together with friends and family to celebrate the end of one season and the start of another?

If you liked this panzanella recipe, you’ll love these too: 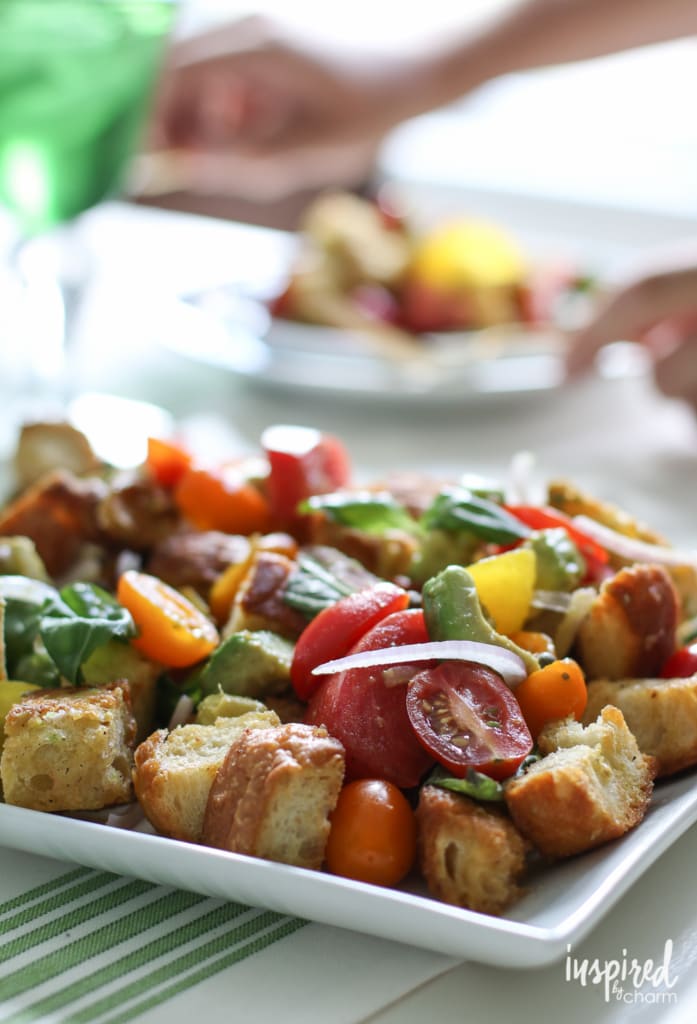 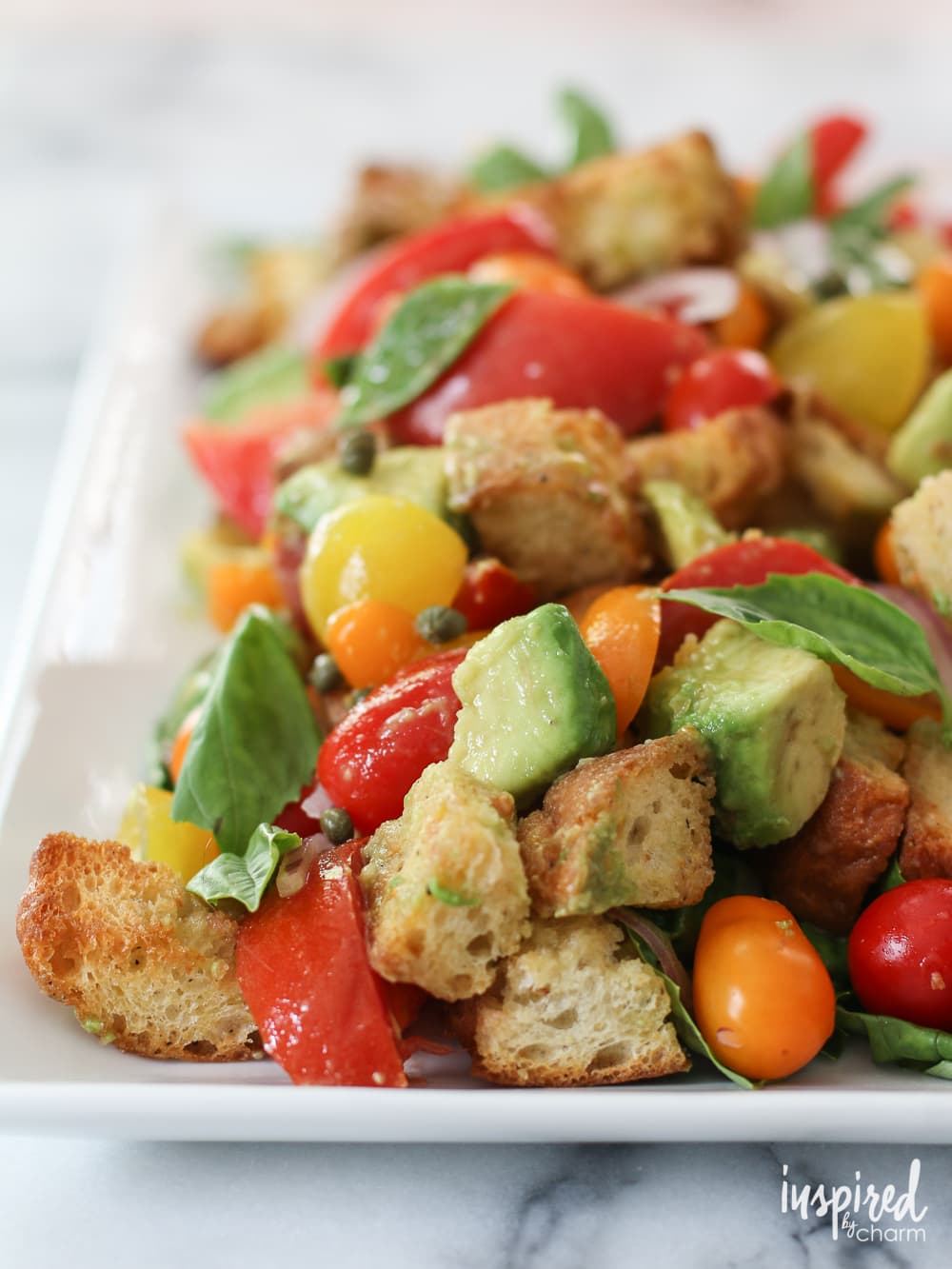 Pin It!
This Avocado Panzanella Salad is a celebration of summer! Bursting with summer tomatoes, crusting bread, fresh basil, and creamy avocados this salad is a winning recipe!
Print

This Avocado Panzanella Salad is a celebration of summer! Bursting with summer tomatoes, crusting bread, fresh basil, and creamy avocados this salad is a winning recipe! It’s hard to believe that summer is almost over. For me, this time of year is bittersweet. As much as I hate to see summer go, there’s also so […]