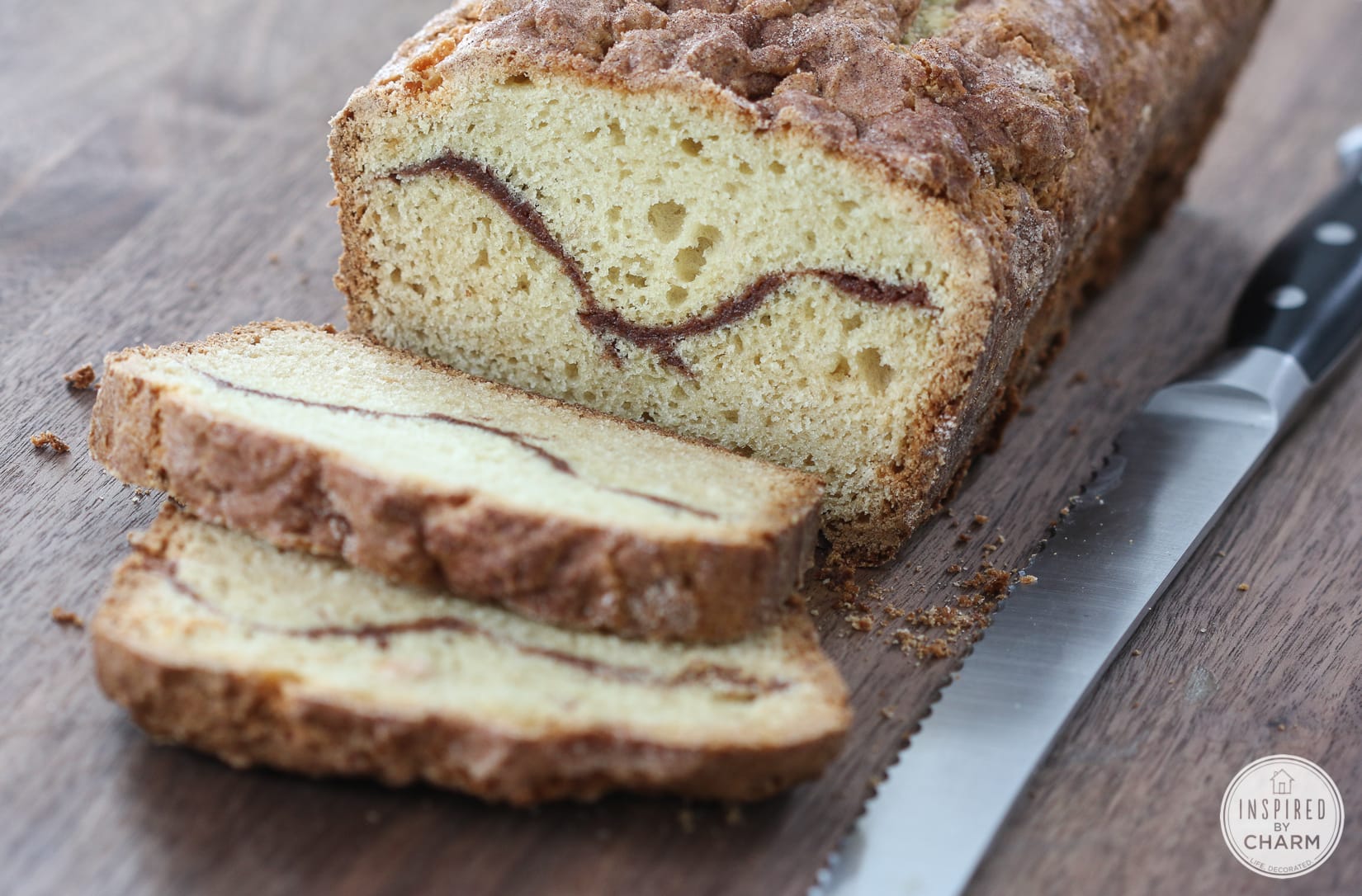 This Cinnamon Sour Cream Bread is my favorite quick bread recipe. It’s a sweet bread with a cinnamon swirl through the middle. It makes the perfect breakfast treat or afternoon sweet.

I can’t believe that after blogging for more than six years, I have yet to share this Cinnamon Sour Cream Bread recipe with you. It’s not fancy, but it’s hands down one of my favorites. 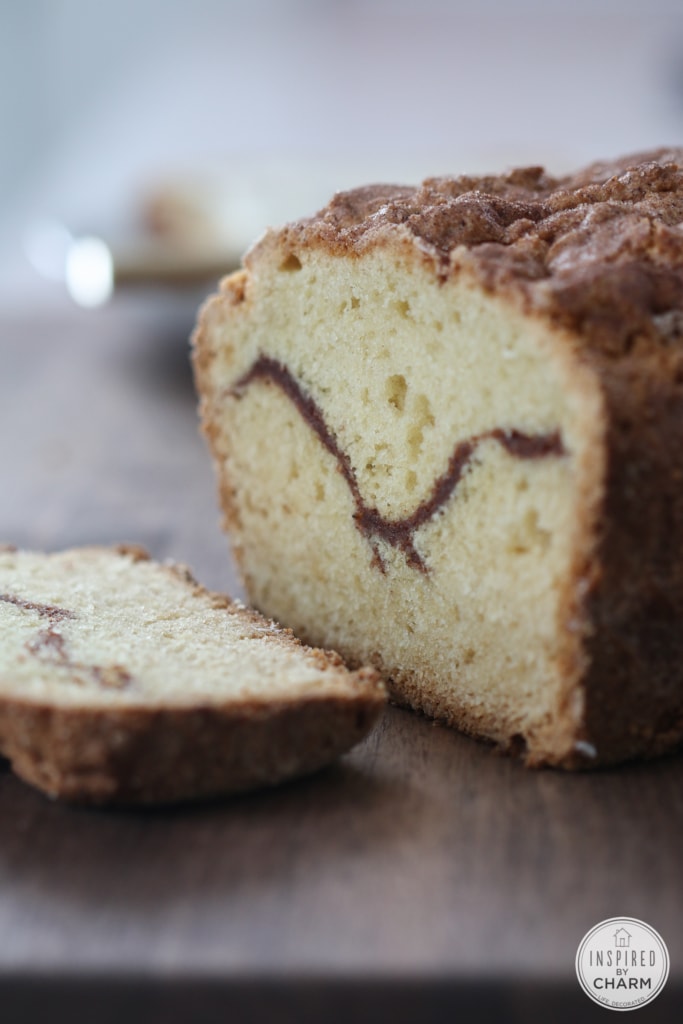 It’s a sweet quick bread known to my family as sour cream bread. I added the word cinnamon to create Cinnamon Sour Cream Bread because it sounds a little tastier.

I should also mention that it’s more like a cake than a bread. Friends, I didn’t name it. Don’t blame me. 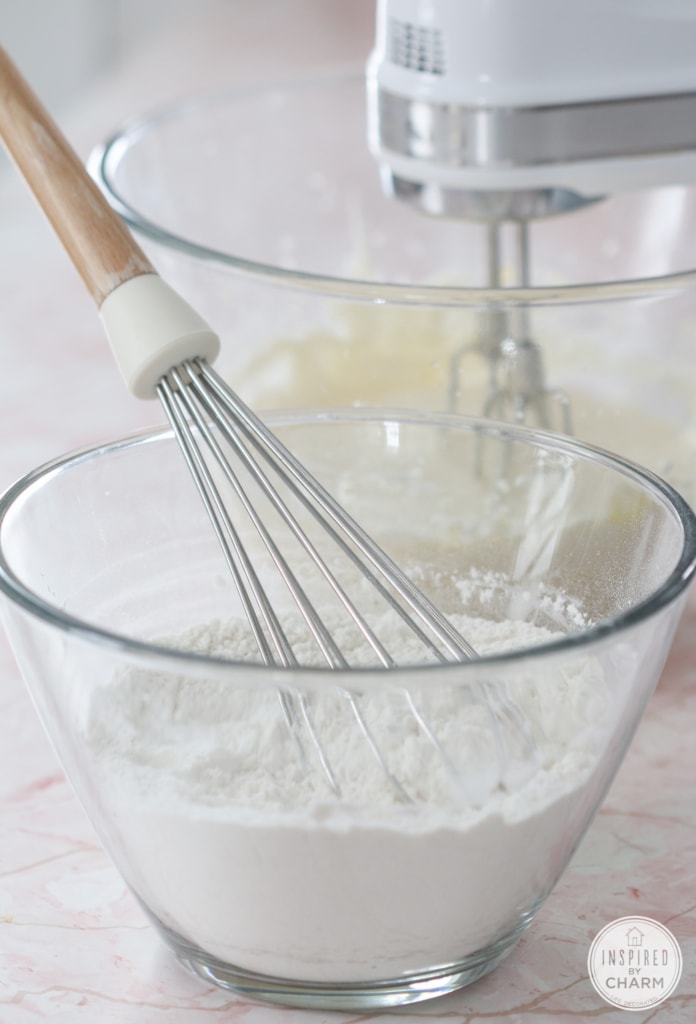 My mom has been baking this bread for as long as I can remember. It has become comfort food to me. One bite and I’m transported back to my youth.

In fact, it was one of those things she would send with me back to college. If given the chance, I could eat a whole loaf in one sitting.

I think the first time I made this recipe myself was when I owned my bed and breakfast. I had my mom write the recipe down for me, and this is what I got: 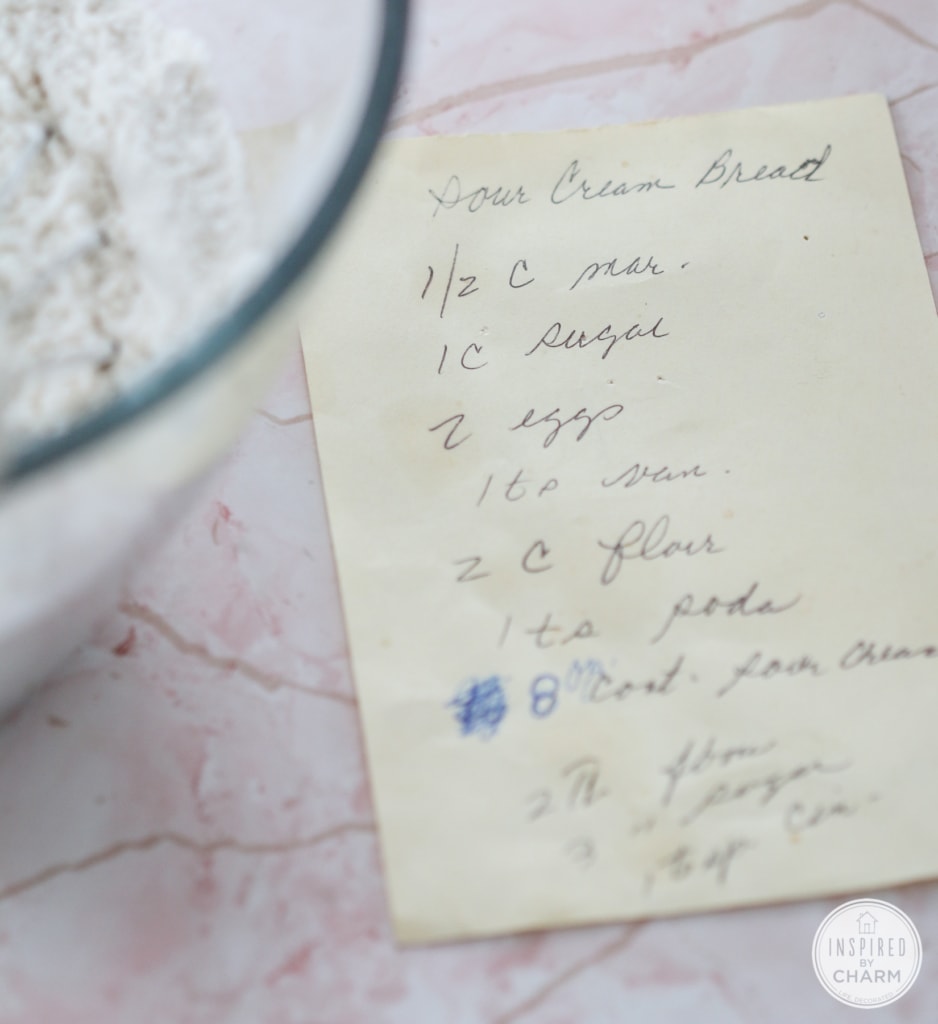 It’s that simple, no actual directions are required. Now, with some baking skills under my belt, I’ve adjusted the recipe slightly to make it even better.

How to Make Sour Cream Bread: 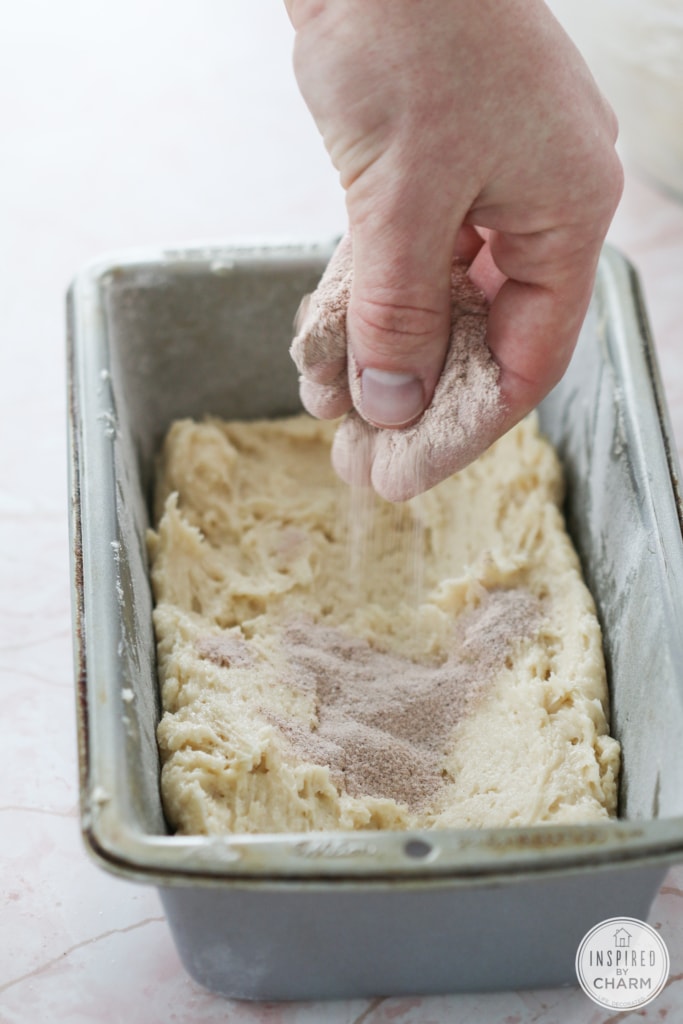 If you look at the ingredient list, it’s mostly pantry staples. However, the resulting loaf has a wonderful flavor and cinnamony goodness that I just love. When I was younger, I would eat around the cinnamon part and save that for last. 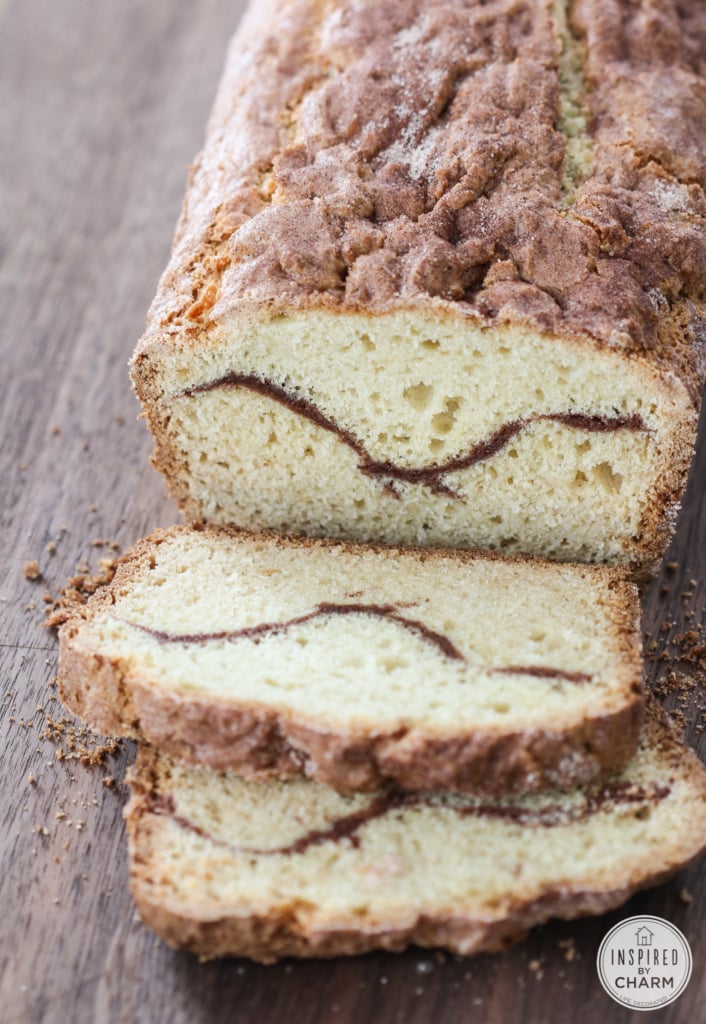 Another thing I love about this bread is that it’s dense. The outside crust is firm and the inside is dense, but still really light and moist. I hope that makes sense.

Now, If you don’t like that thicker, firmer crust, this may not be for you. But I can’t get enough. In fact, my favorite pieces are the heels. Just writing this has me craving a piece. Let me smear a little butter on top, grab a cup of coffee, and I’ll be set.

Seriously, I can’t stop gushing. However, I will stop my fingers from typing on and on and just give you the recipe. 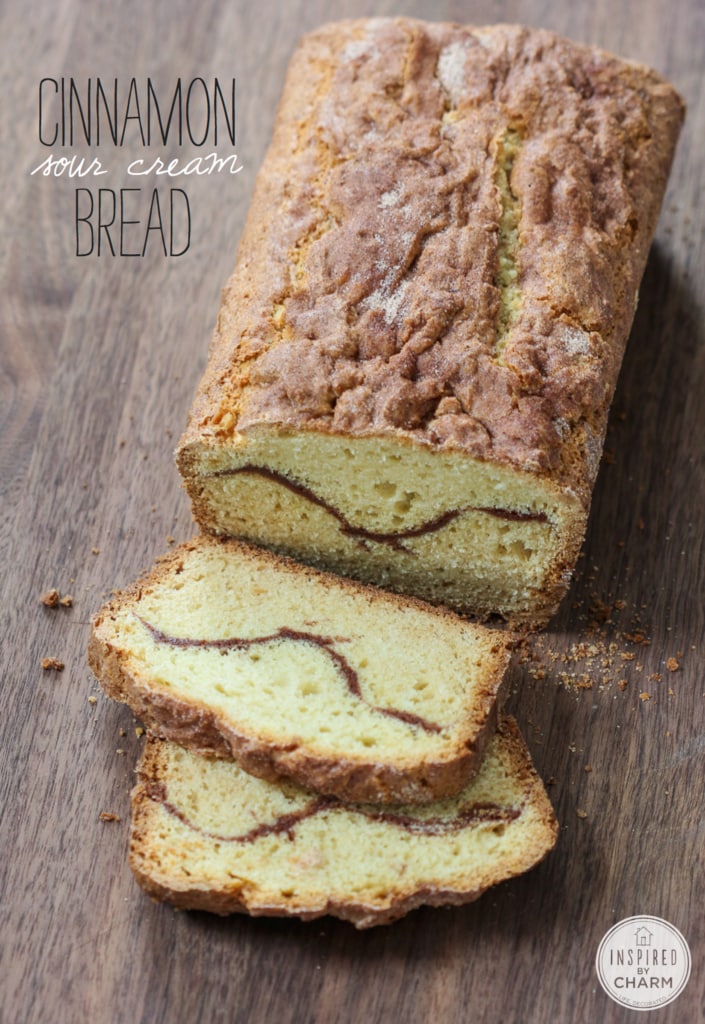 Begin by preheating your oven to 350 degrees F. Grease and flour a 9x5-inch loaf pan; set aside.

In a small bowl, prepare the cinnamon swirl by whisking together the flour, sugar, and cinnamon. Set aside.

Then, for the bread, in a large bowl whisk together the flour, baking soda, baking powder, and salt.

In a medium size bowl, with a handheld (or electric mixer) beat the softened butter until light and airy, about three minutes. Add the sugar and beat again until combined, about four minutes. Next, add the eggs one at a time, incorporating the first one before adding the second. Finally, beat in sour cream and the vanilla.

Now gently incorporate the wet ingredients into the dry. Mix until just combined, being careful not to overmix. The final mixture will be more the consistency of a dough rather than runny like a cake batter.

Spread half of the mixture into the bottom of your greased and floured pan. Then evenly sprinkle your prepared cinnamon swirl over the top. Spread the remaining dough on top of the cinnamon swirl layer.

Finally, in a small bowl, mix together the sugar and cinnamon for the topping. Sprinkle this evenly over the top of the loaf.

Bake at 350 degrees F for 60-65 minutes. The loaf is done when a toothpick (or wood skewer) inserted near the center comes out clean.

Allow to cool in the pan for about 20 minutes. Gently run a butter knife around the edge of the pan to loosen the loaf. Remove from the pan to finish cooling.

If you liked this recipe, I think you’ll enjoy these too: 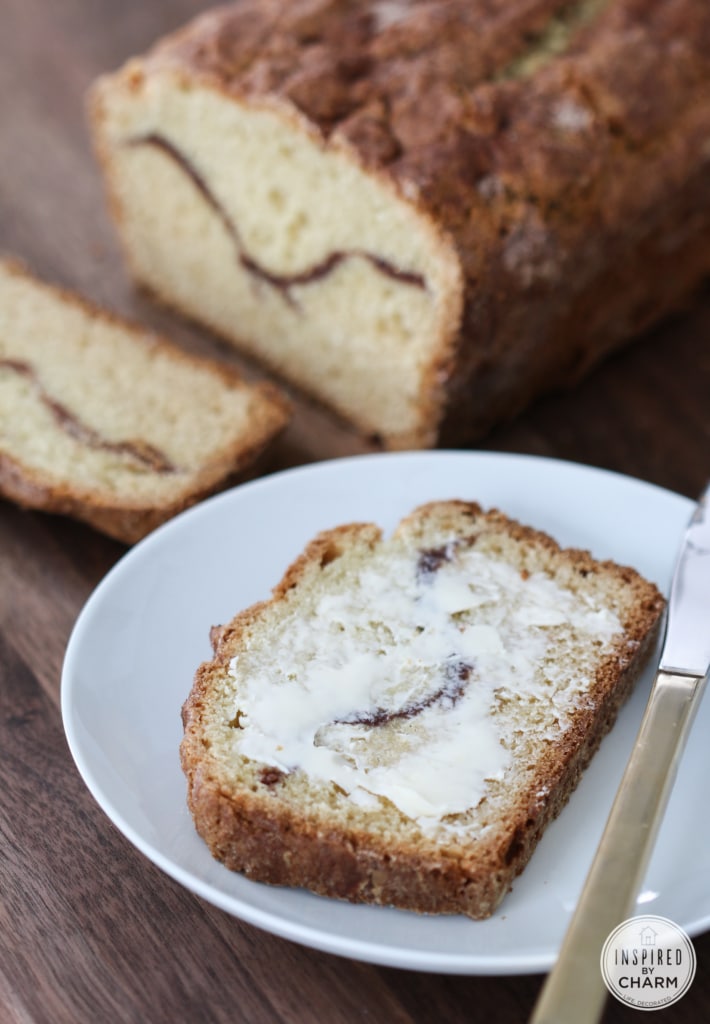 Pretty simple, right? Give this sour cream bread a try. I know you’re going to love it. 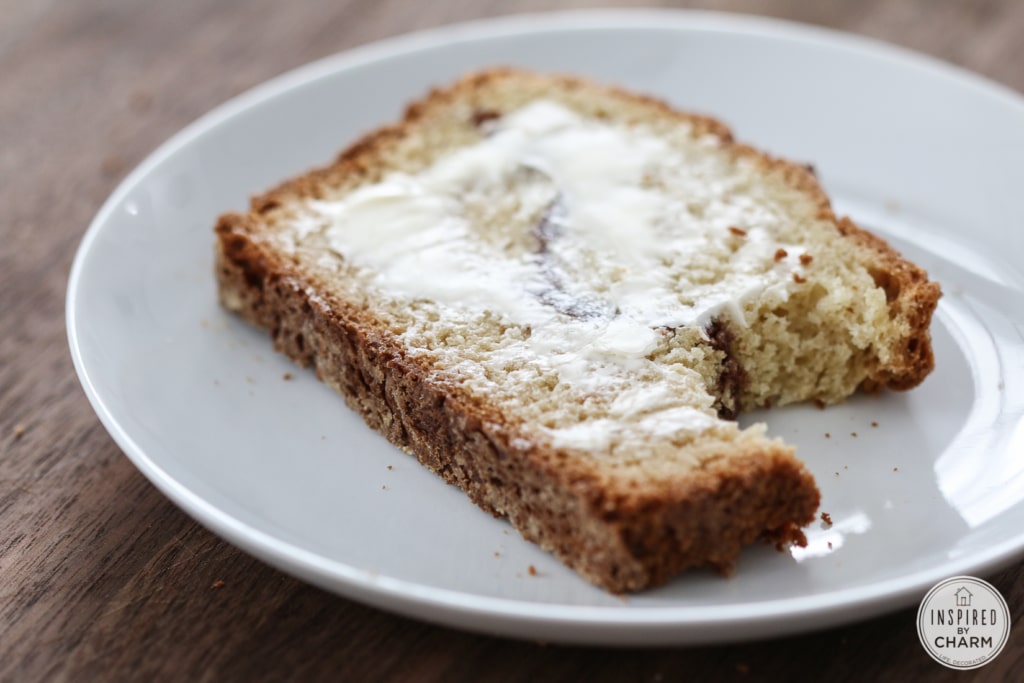 What recipes do you make that take you back to another time or place?