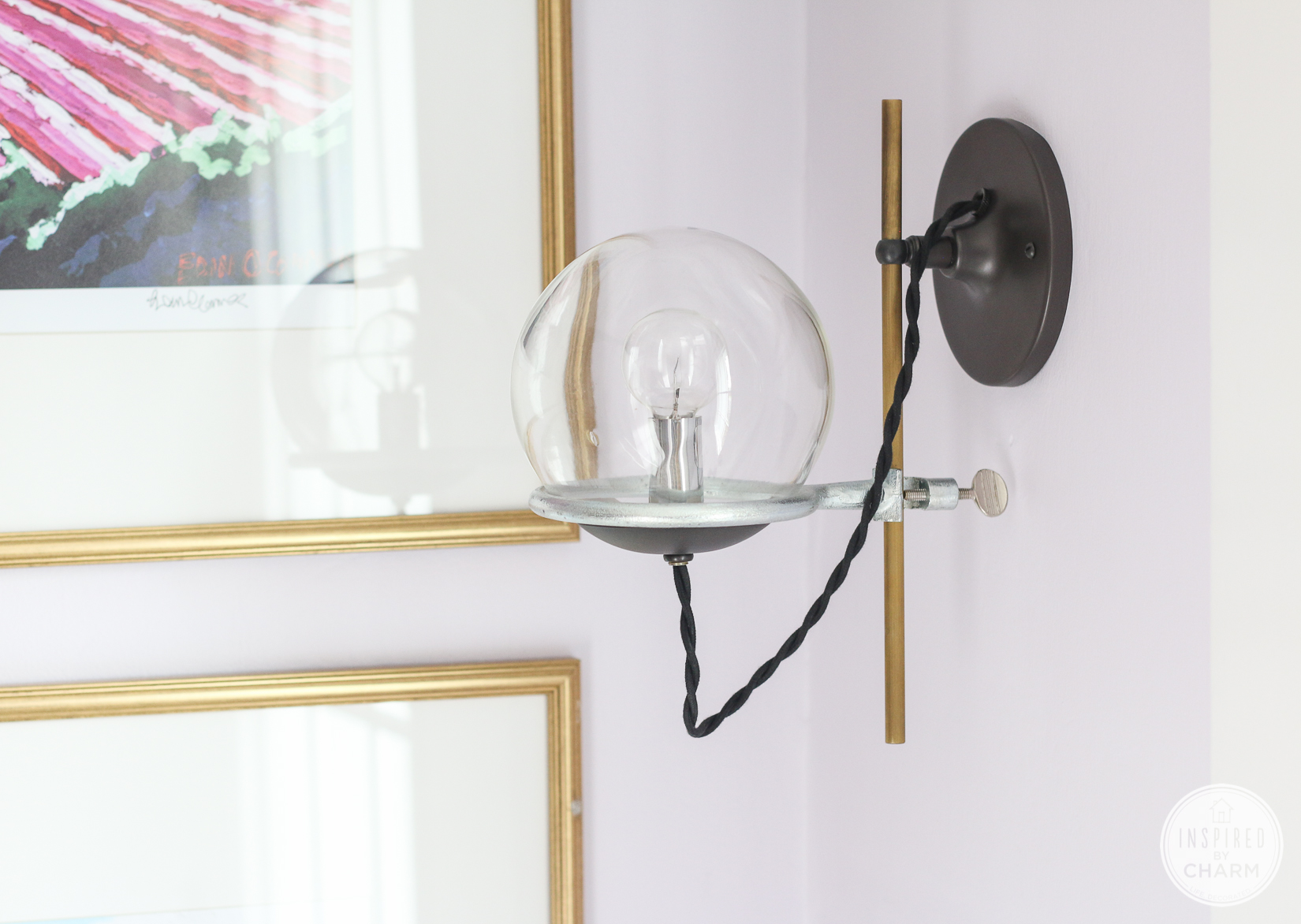 I finally managed to get together the finishing touches for the basement stairwell. It’s safe to say it’s finished. (Well, as finished as it’s going to get for now. Nothing is ever truly finished around here.) Remember where I started? So, I thought I’d give you a peek at how the it looks. 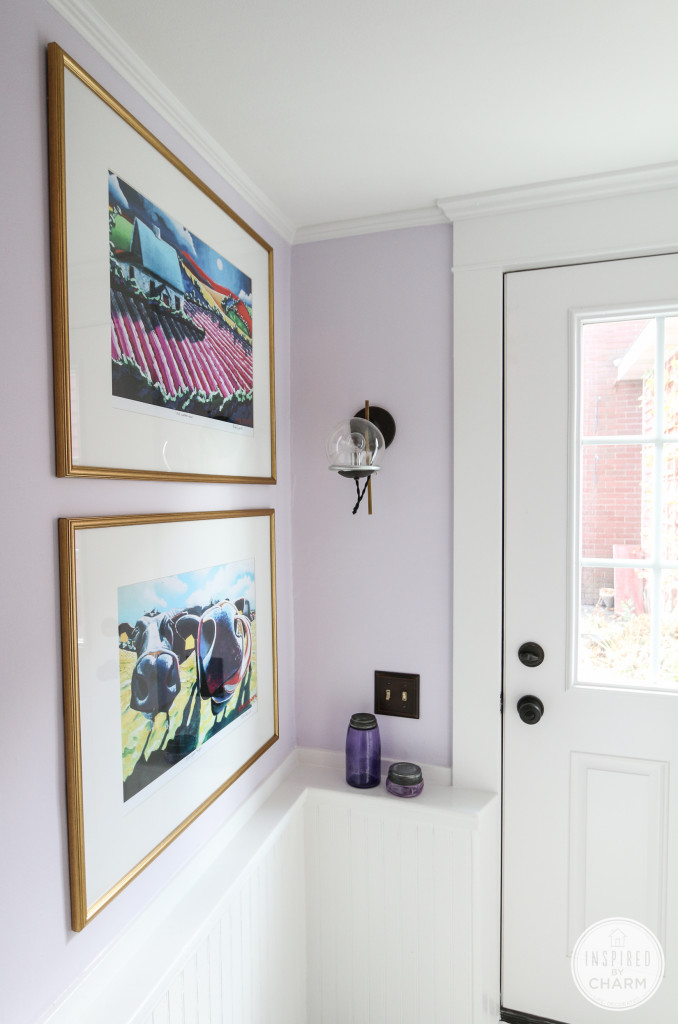 Bam! Cute, right? Everything turned out better than I imagined. I’m so pleased with the results. (If you’re looking for paint color information, check out that post here.)

First, let’s talk about the light fixture. Isn’t it, amazing? 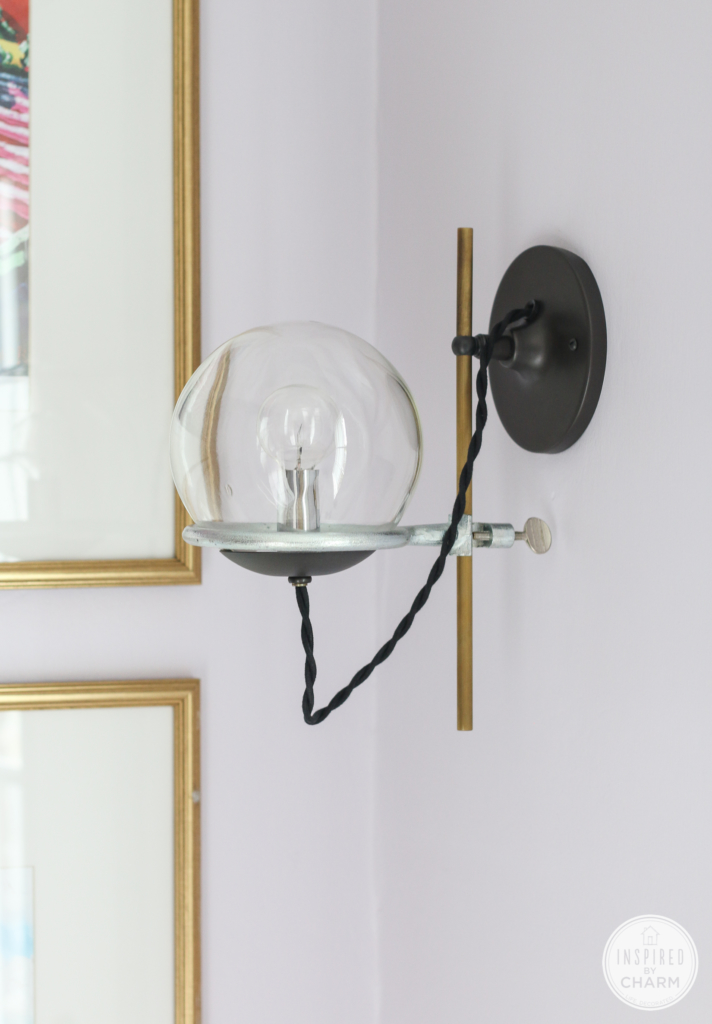 Since this space isn’t very big, I decided to splurge a bit on the few pieces that would fill it. The fixture is the Orbit Wall Sconce from School House Electric. It’s magical, and I’m so happy I bought it. It comes in a bunch of finishes, but I think this one is right for this small area. It’s a mix of black, silver, and brass. Hard to go wrong. 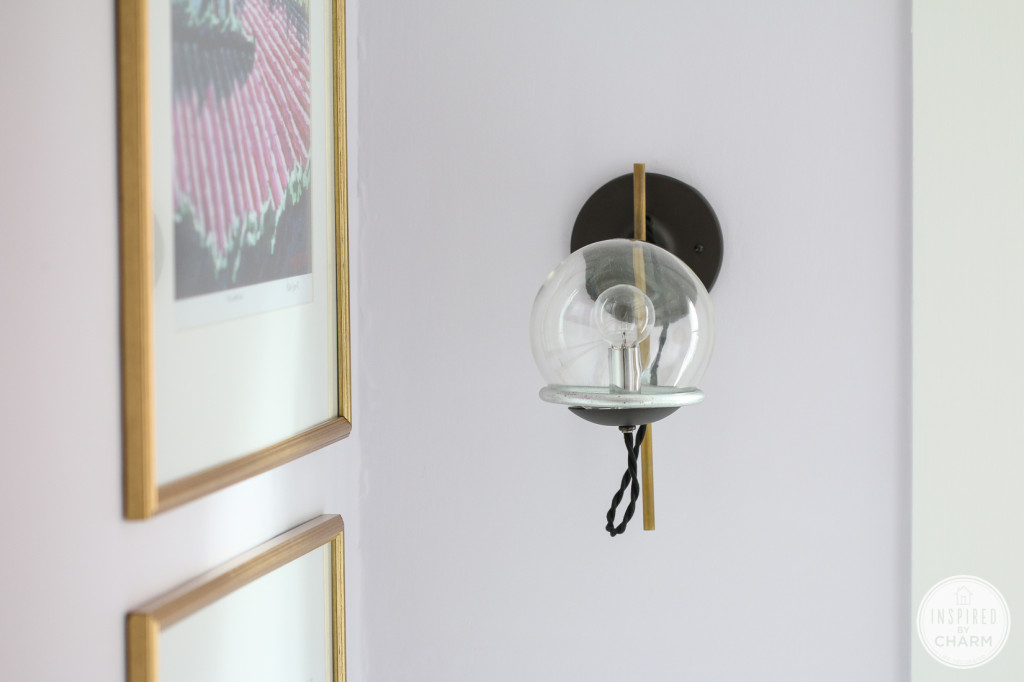 While it was on the expensive side, I think the light totally helped bring the space together. And to be honest, I don’t mind putting money into light fixtures. They’re both functional and decorative.

Moving on to the art. 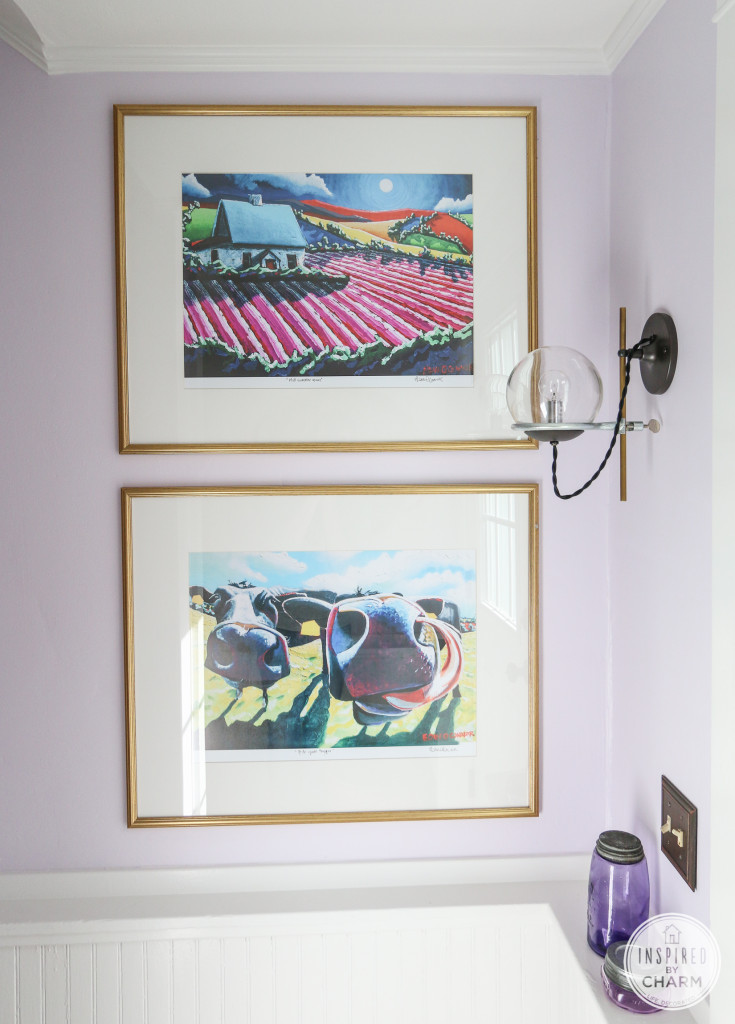 Again, another win for the space. This art is from Eoin O Connor. I first saw his work when I went to Ireland this past summer. He is from Ireland. I instantly fell in love with the bright colors and quirky images. When I was considering what to put on the wall, I thought the color would be just the thing. Plus, it gives me a good laugh every time I come up the stairs. 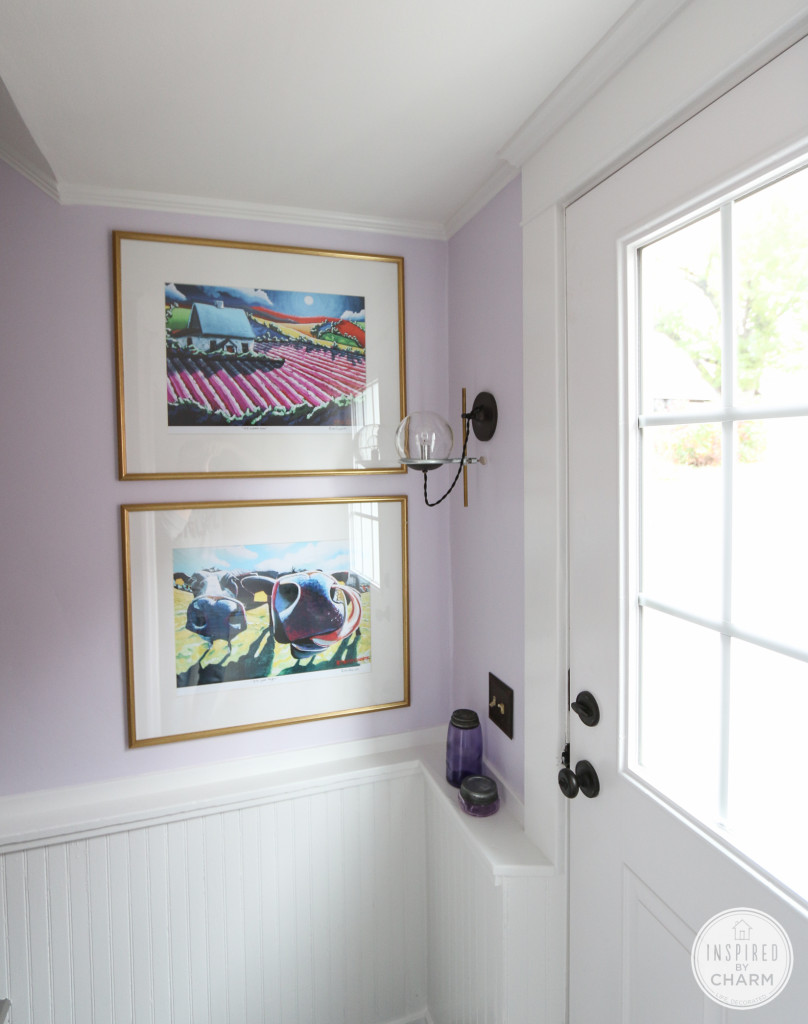 Since the art was an odd size, I ordered some frames and mats via Frames by Mail. I’ve used them for years. (In fact, a lot of the frames in my gallery wall are from there.) They usually have some sale or discount happening, too.

I opted for a thin gold frame and a white mat which works well with the light fixture. 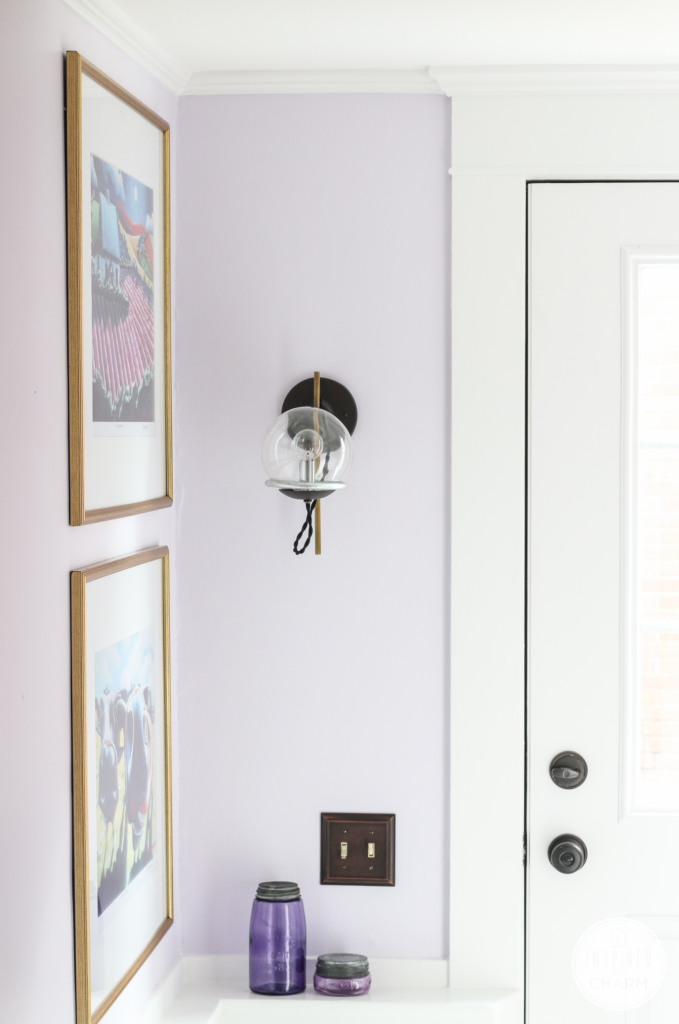 You can see that I added a few small purple jars on the shelf for a little more color and visual interest. I really want to keep this area simple, and they added just the oomph I wanted. 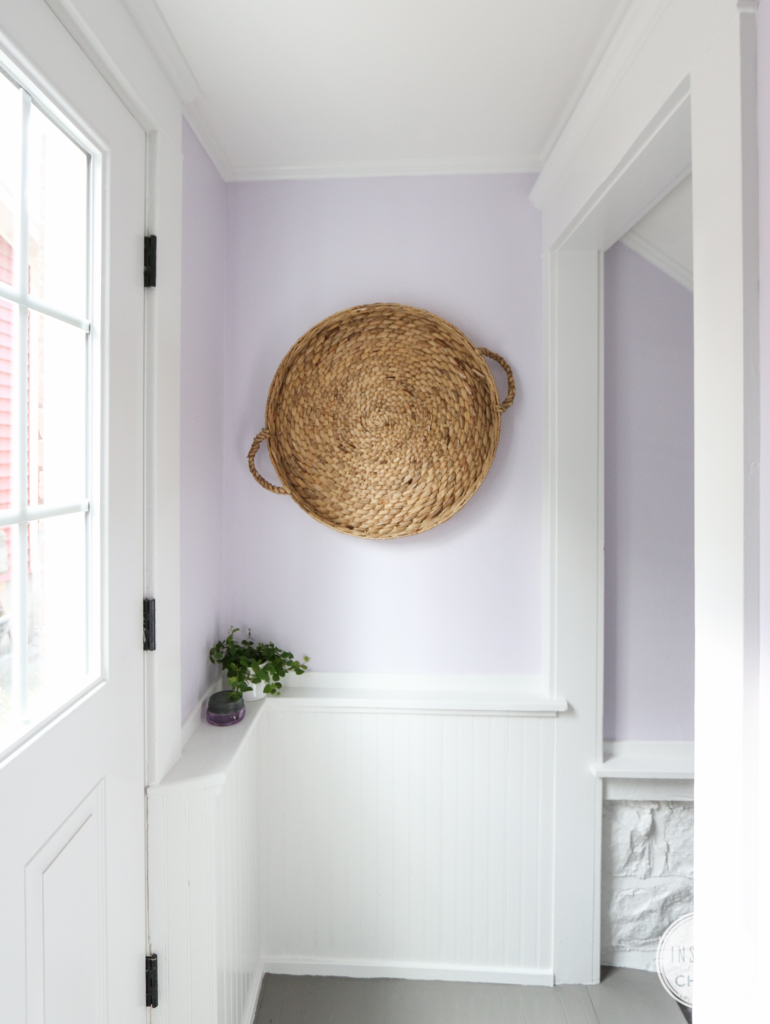 On the opposite wall, I hung a large wicker tray that I picked up earlier this year from Target. I actually had no place to store it, so it ended up here by accident. However, I think it works nicely in the space. A little greenery and another jar brighten things up on the ledge. 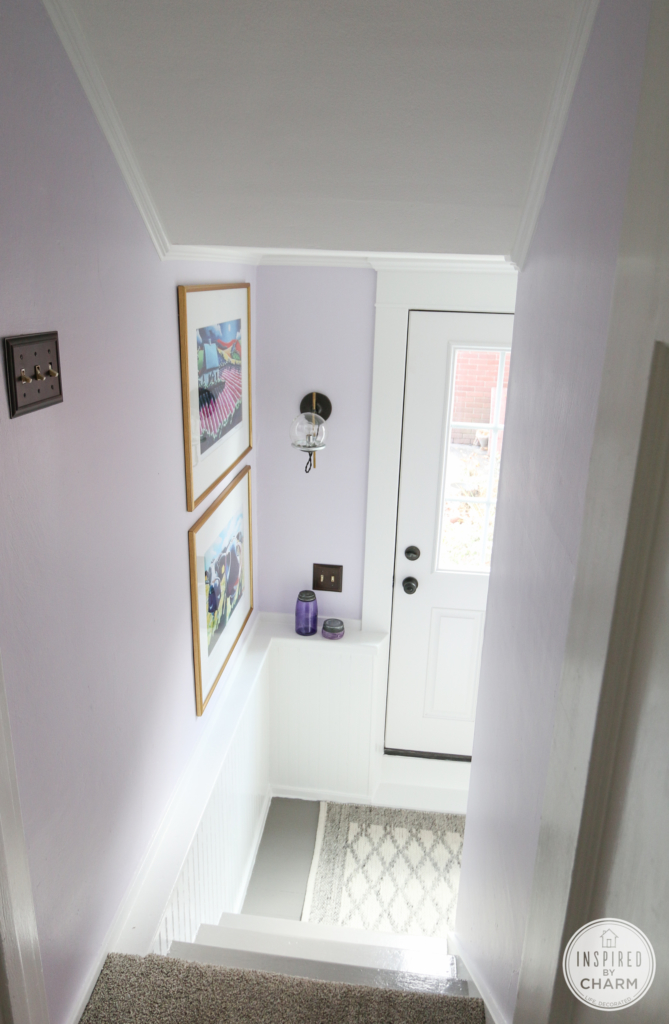 For the floor, I found the perfect small carpet at HomeGoods. I considered putting a runner on the stairs, but I’m shying away from that for the moment. I think a small rug in the landing area is fine for now.

And that’s it! Another area I can cross off my list. Should we do before and after? Let’s! 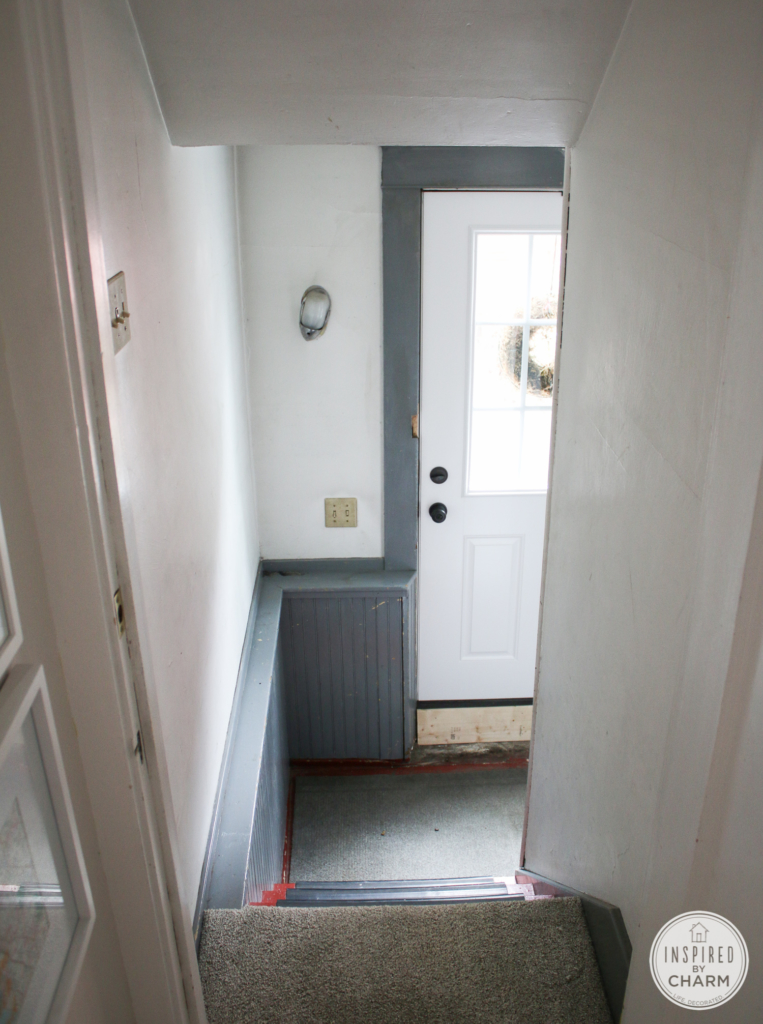 What do you think of the transformation?

I finally managed to get together the finishing touches for the basement stairwell. It’s safe to say it’s finished. (Well, as finished as it’s going to get for now. Nothing is ever truly finished around here.) Remember where I started? So, I thought I’d give you a peek at how the it looks. Bam! Cute, right? […]