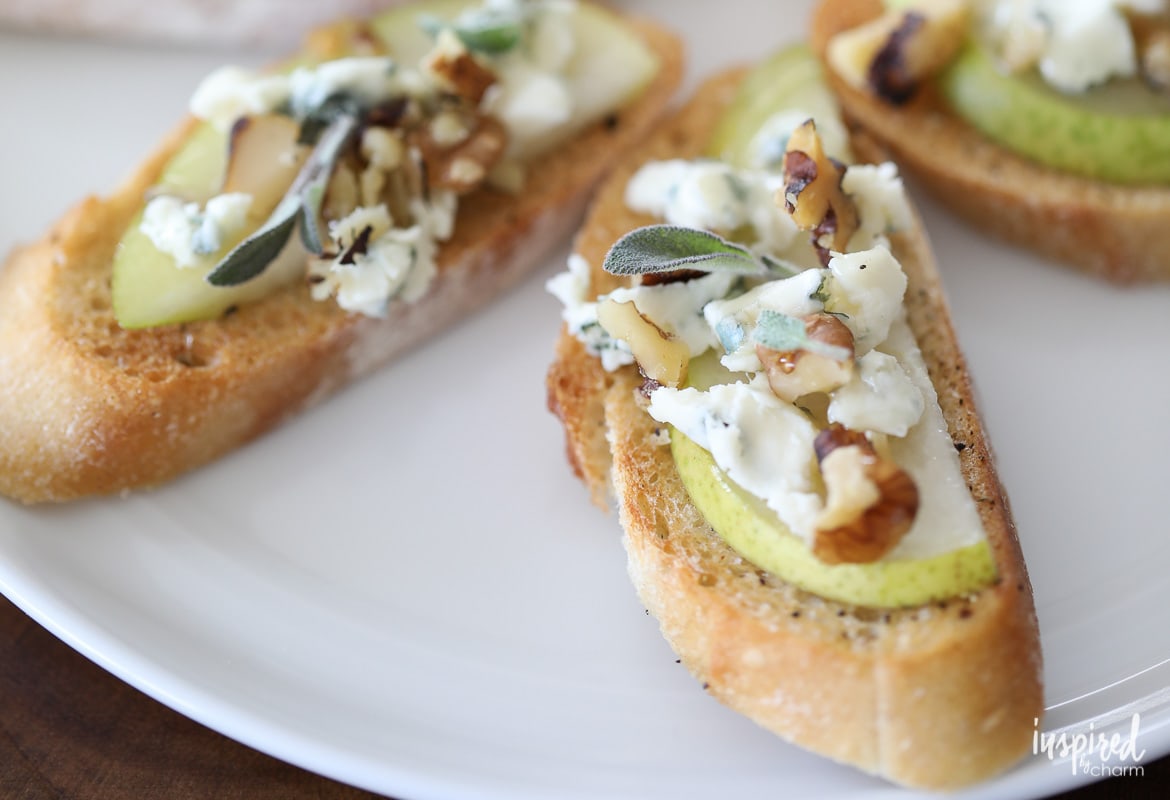 This recipe for Blue Cheese, Pear, and Honey Crostini makes my tummy happy. The pear slice and drizzle of honey are the perfect complement for the blue cheese and toasted baguette slice. 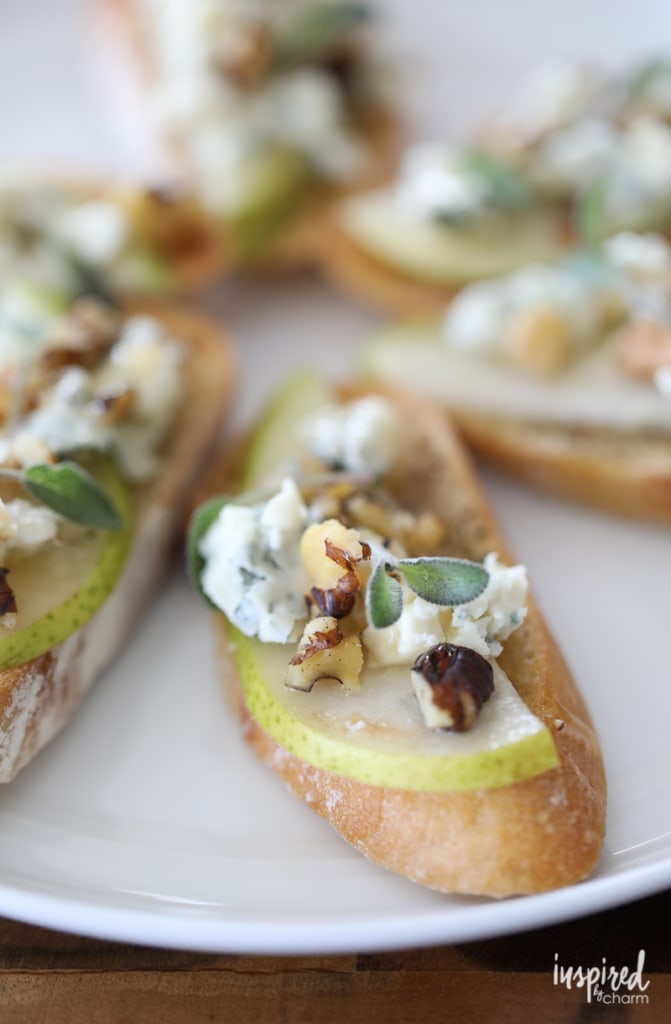 You are going to enjoy making this Blue Cheese, Pear, and Honey Crostini and serving a platter of them to your guests. This appetizer is simple to put together, however, it will give our next party a gourmet touch.

I often like to serve a variety of crostini as an appetizer. If you’re looking for other delicious crostini ideas, check out my Mozzarella Caprese Crostini recipe or my Brie, Fig, and Prosciutto Crostini recipe.

A crostini is a tiny, open-faced sandwich. Like a sandwich, it’s layered with ingredients such as meats, cheese, fruits, veggies, and spreads.

To make a crostini, first, slice a baguette on the diagonal. Doing this creates larger, fancier-looking slices. 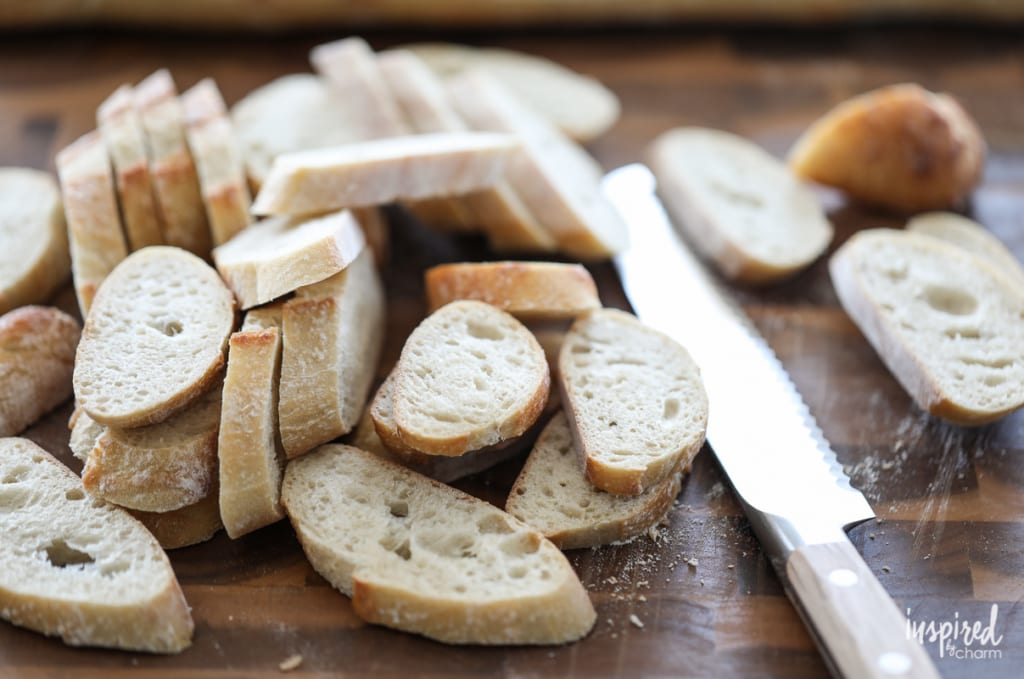 Then place the bread slices in a baking pan. I also brushed them with extra virgin olive oil and sprinkled them with salt and pepper.

Next, pop the slices under the broiler for 4-5 minutes. Slightly browning the bread not only adds flavor and crunch but also makes it a sturdy support for the toppings. 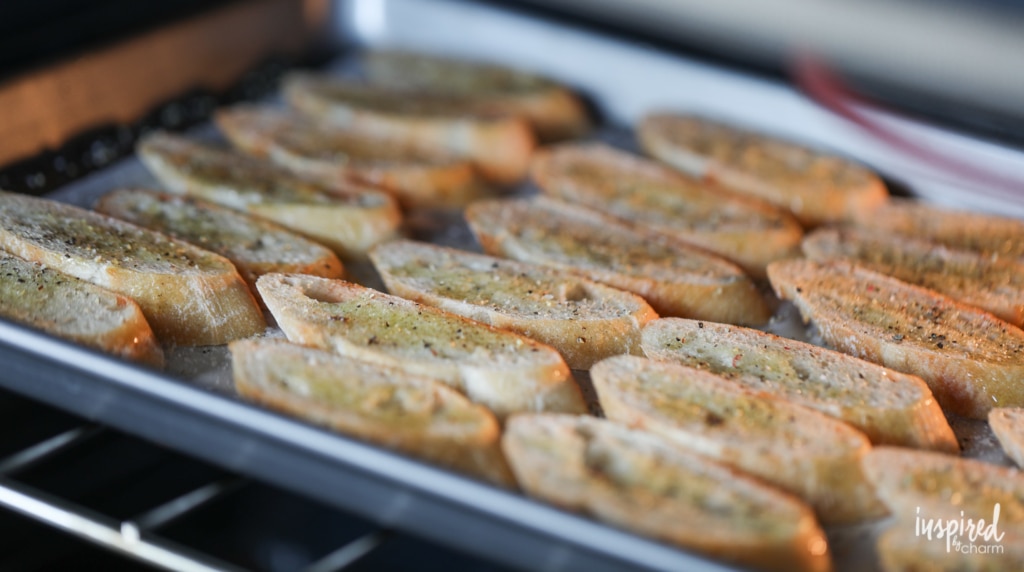 While the bread cools, gather and prepare your toppings for the Blue Cheese Crostini.

To assemble the Blue Cheese, Pear, and Honey Crostini, I first put a slice of fresh pear on the crostini. Then I crumbled on some blue cheese and added chopped walnuts for crunch. 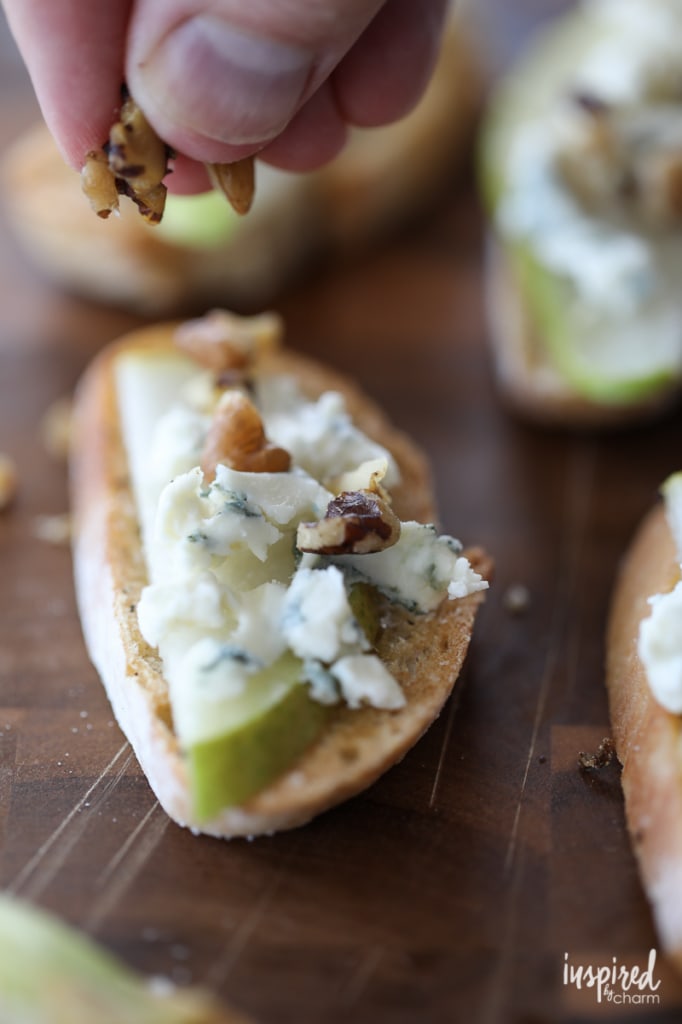 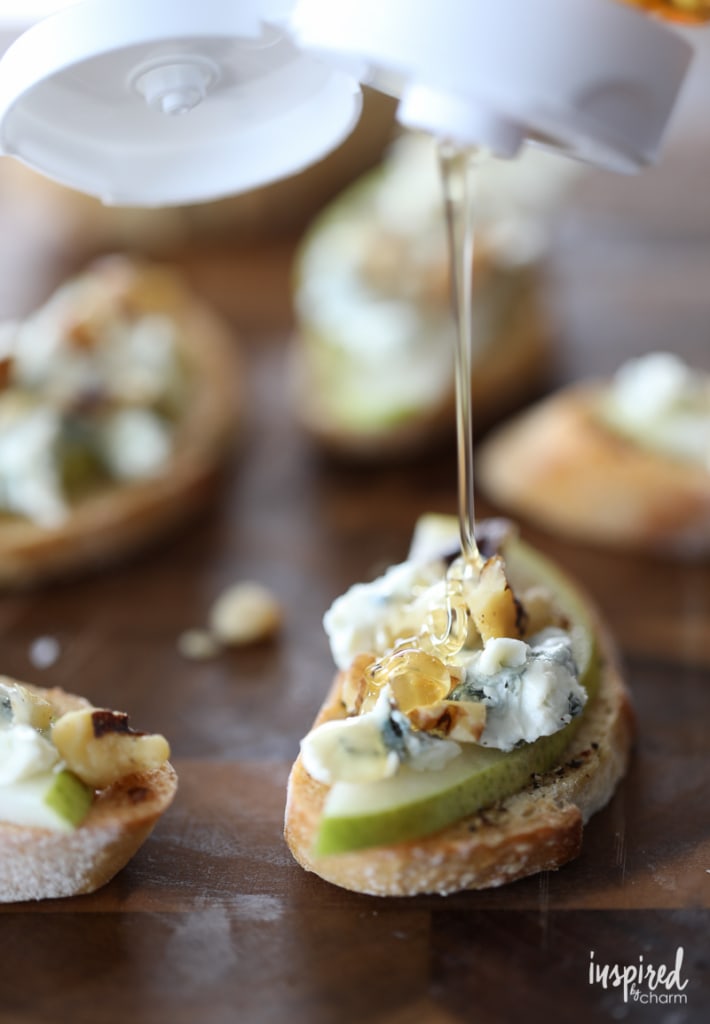 Because blue cheese pairs so well with something sweet, a drizzle of honey came next. Finally, since I had fresh sage on hand, I added some of the smaller leaves.

What a cute and tasty bite! I’m in love.

Beyond being delicious and beautiful, one of the wonderful things about crostini is that you can make it your own. If you’re not a fan of the ingredients I used, swap them out for what you prefer. For example, an apple slice with cheddar would also be a wonderful combination. 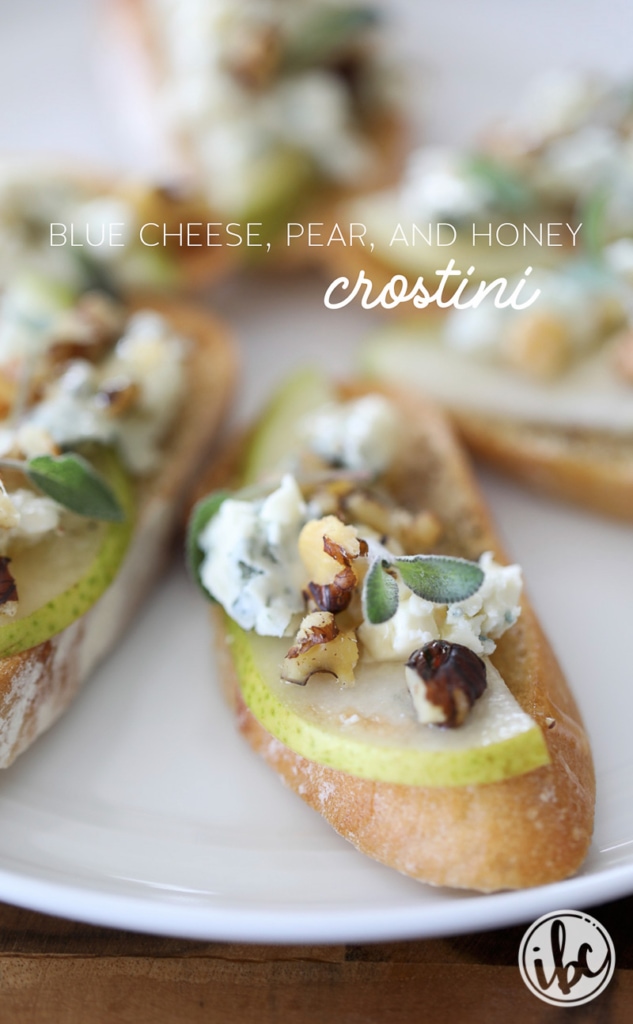 Get creative with new recipes. The options are endless.

You can find more of my blue cheese-inspired recipes here: 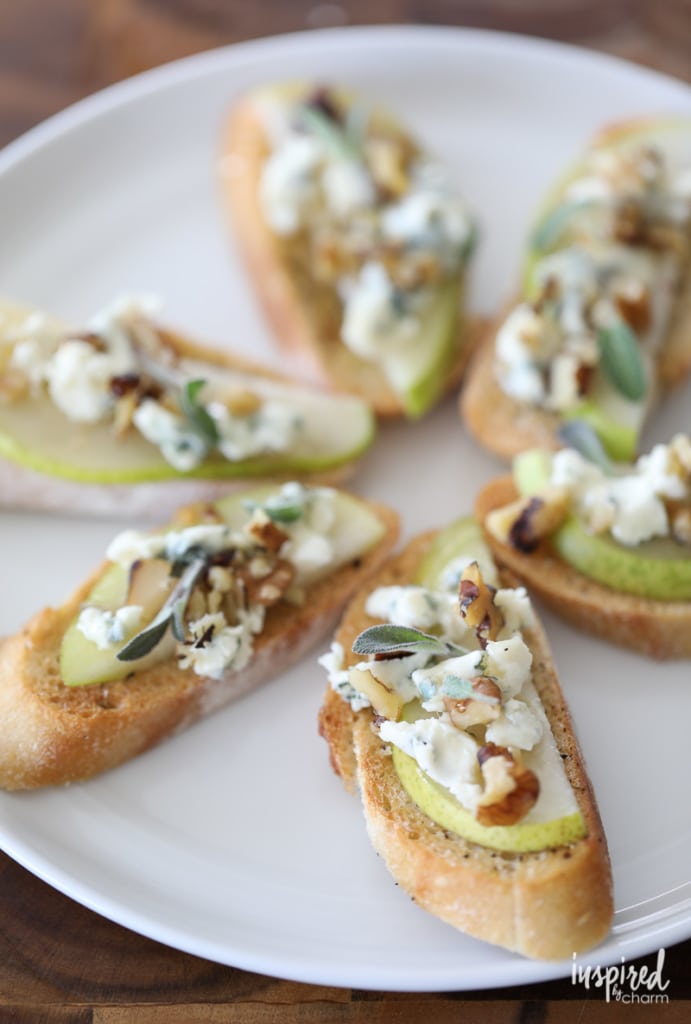 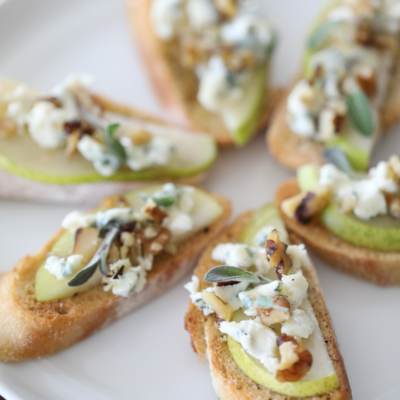 Pin It!
This recipe for Blue Cheese, Pear, and Honey Crostini makes my tummy happy. The pear slice and drizzle of honey are the perfect complement for the blue cheese and toasted baguette slice.
Print