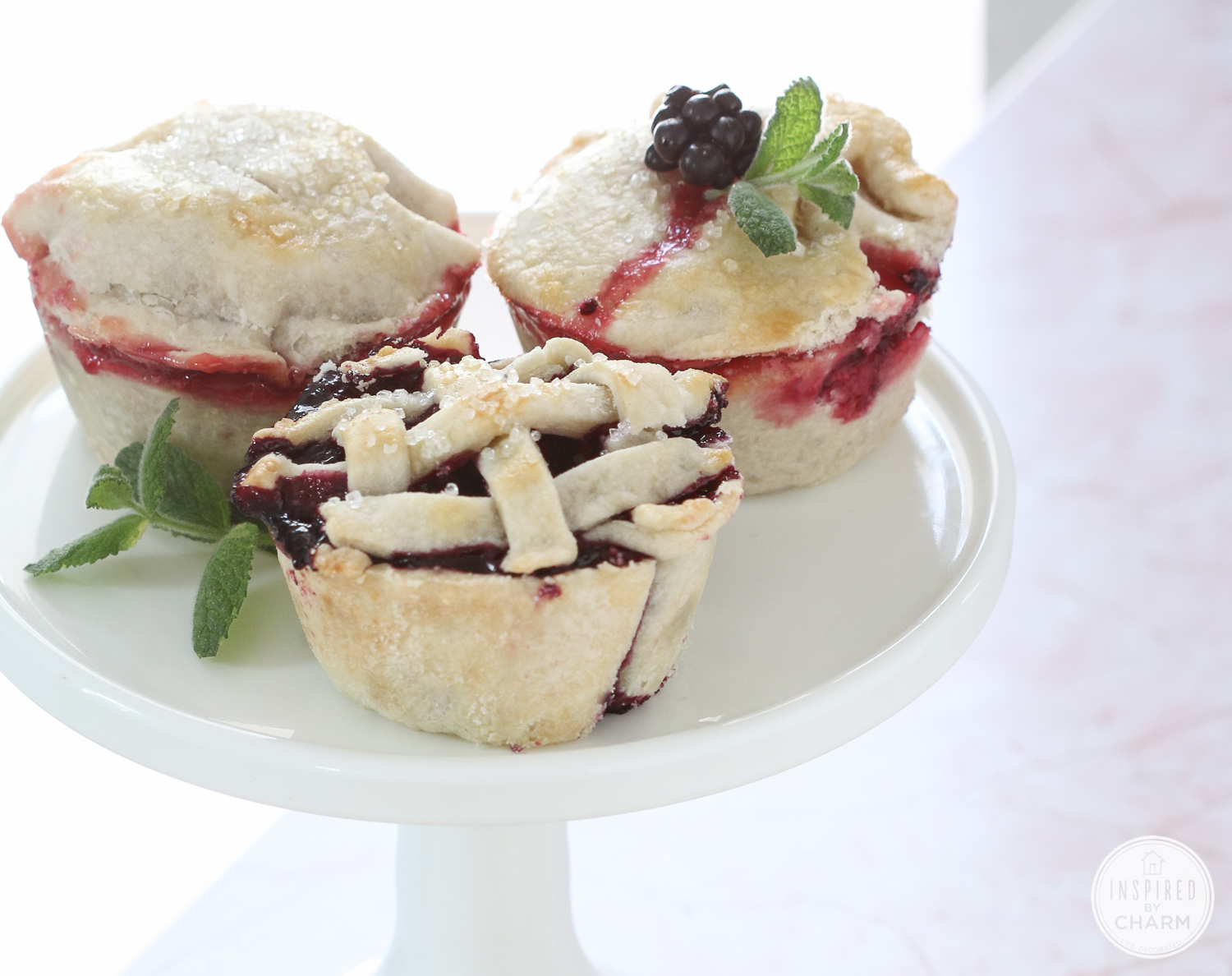 Ever since I started A Year of Pie back in January, one of my goals has been to make cup pies. I’m not sure if there really is such a thing, but I got the idea from the television series Pushing Daisies, which premiered back in 2007. To be honest, I never watched the show until a few years ago. Now I highly recommend it. I’ve watched both seasons of it at least a couple times. It’s that good. Kristen Chenoweth is in the series, and she’s hysterical.

Anyway, the main character owns a pie shop, and his girlfriend suggested that he add cup pies to the menu. In essence, a cup pie is a pie in cupcake form. Hence the name, cup pie. 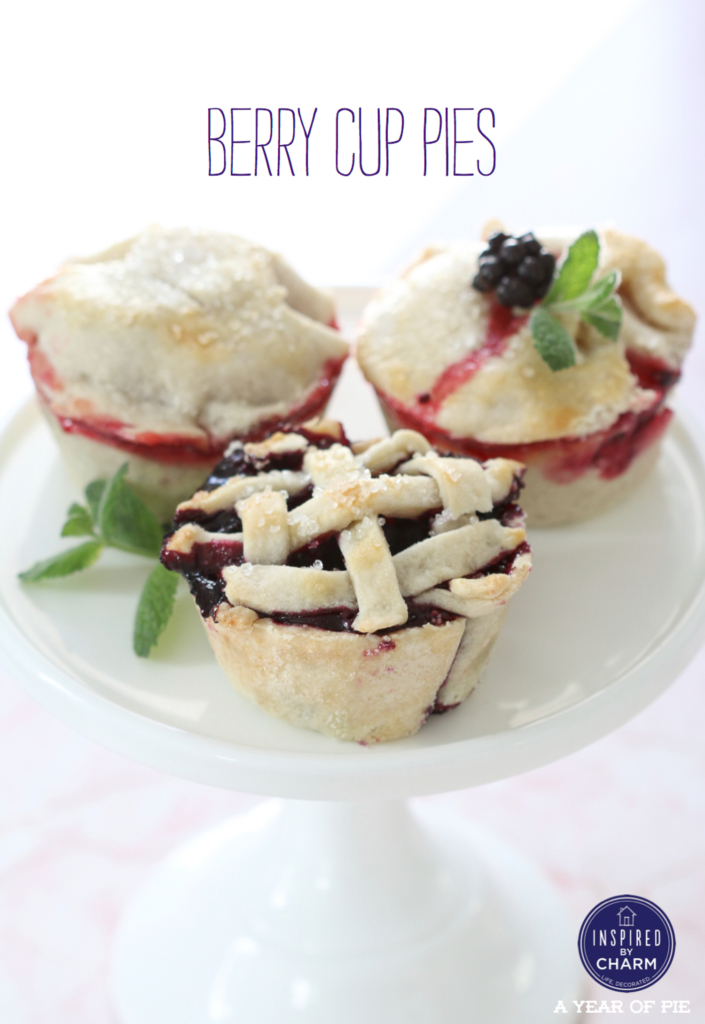 Adorable mini-pie goodness. I mean, what’s better than a single-serving pie? (Maybe a regular-size pie? I have eaten a whole one in a single setting, but that’s another story.)

With summer coming to a close and the days for fresh berries waning, I thought I’d share a few variations for whipping up cup pies. If you prefer. you can use your own favorite pie recipe and just make it in a cupcake pan instead of a regular pie dish.

I started with IBC’s go-to pie crust. This time, I mixed the dough by hand and added in two tablespoons of honey. I used the honey because that’s what they did in Pushing Daisies, and it’s another layer of flavor. One batch of dough makes enough for twelve cup pies. 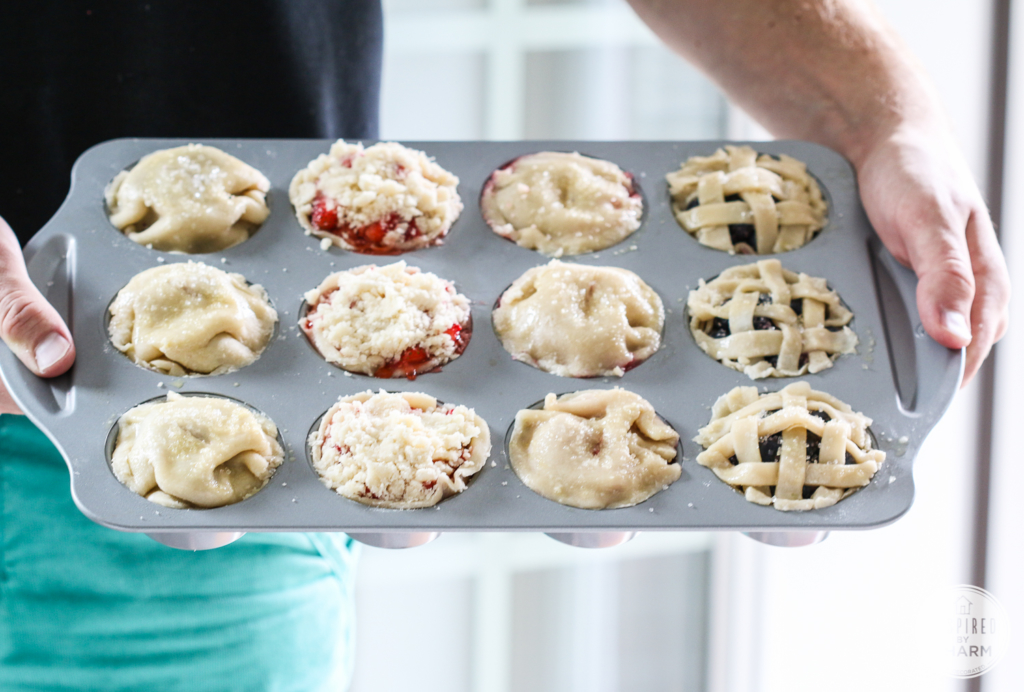 I tried four different berry fillings (blueberry, raspberry, strawberry, blackberry) and three styles of crusts (regular, lattice, crumb). The filling recipes are basically the same with the exception of the berry. Feel free to stick with a single kind of berry or mix it up like I did. 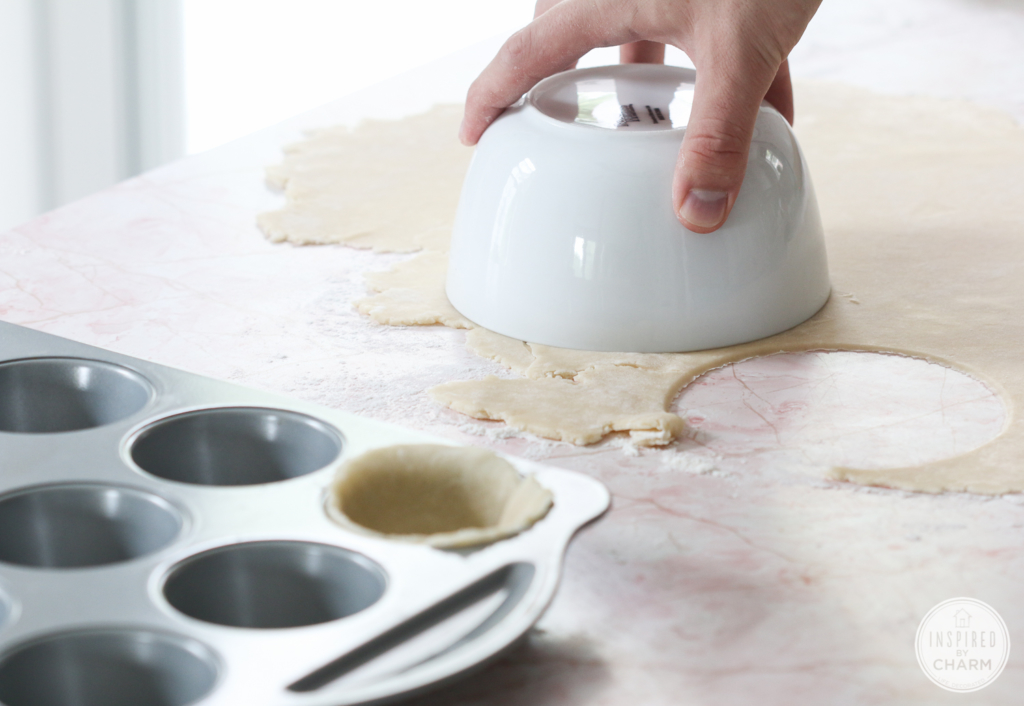 To cut the round crust, I used a bowl with a diameter of about 5 inches. This size circle of crust fit perfectly inside the cups of the cupcake pan. Also, I sprayed the inside of each cup with baking spray just to make sure things came out easily. 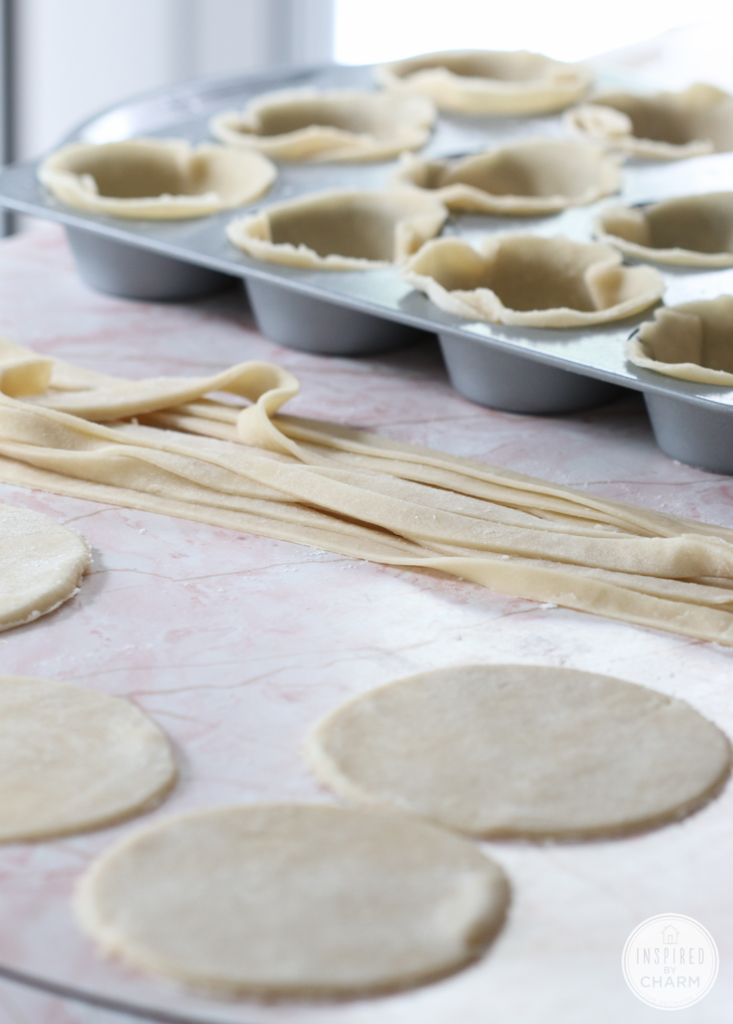 I like to prepare both the top and bottom layers of crust before mixing up my pie filling. I find that the longer the pie filling sits, the runnier it gets. Not preparing it in advance helps to cut down on the filling running over. 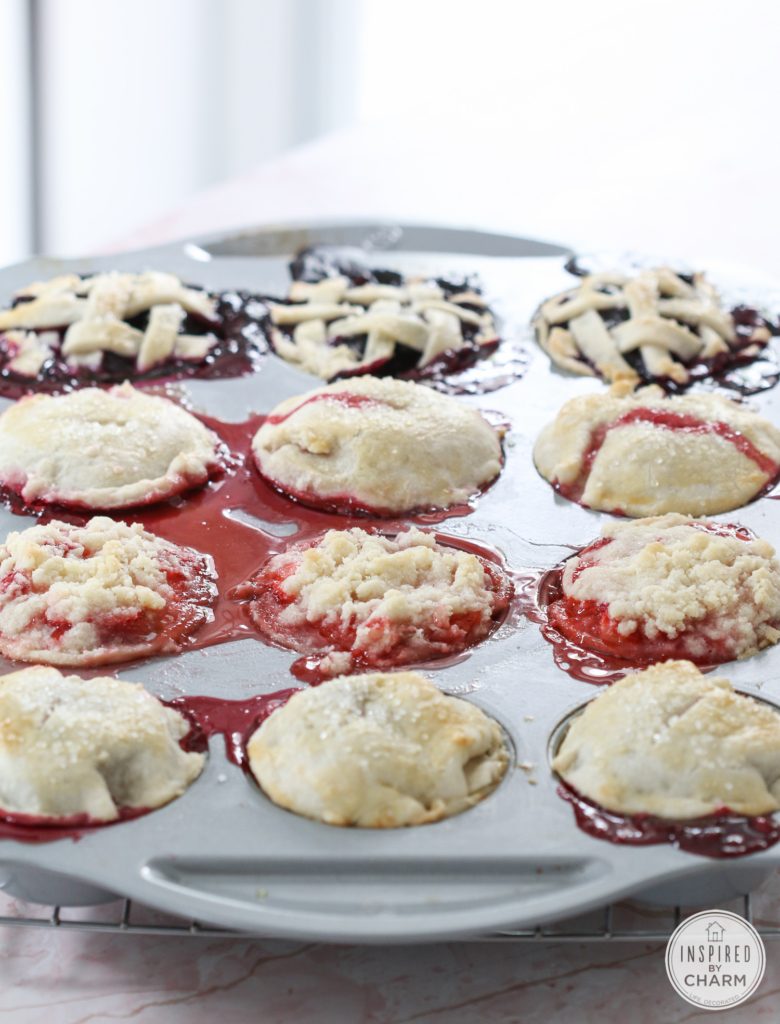 And don’t panic; you will have some juice leak from your cup pies. It’s a bit challenging to get the two crusts together perfectly, so you will have some holes between the two crusts. Just let your cup pies thoroughly cool before removing them from the pan, and no one will notice that the filling has run over a bit. – I actually like the rustic look. 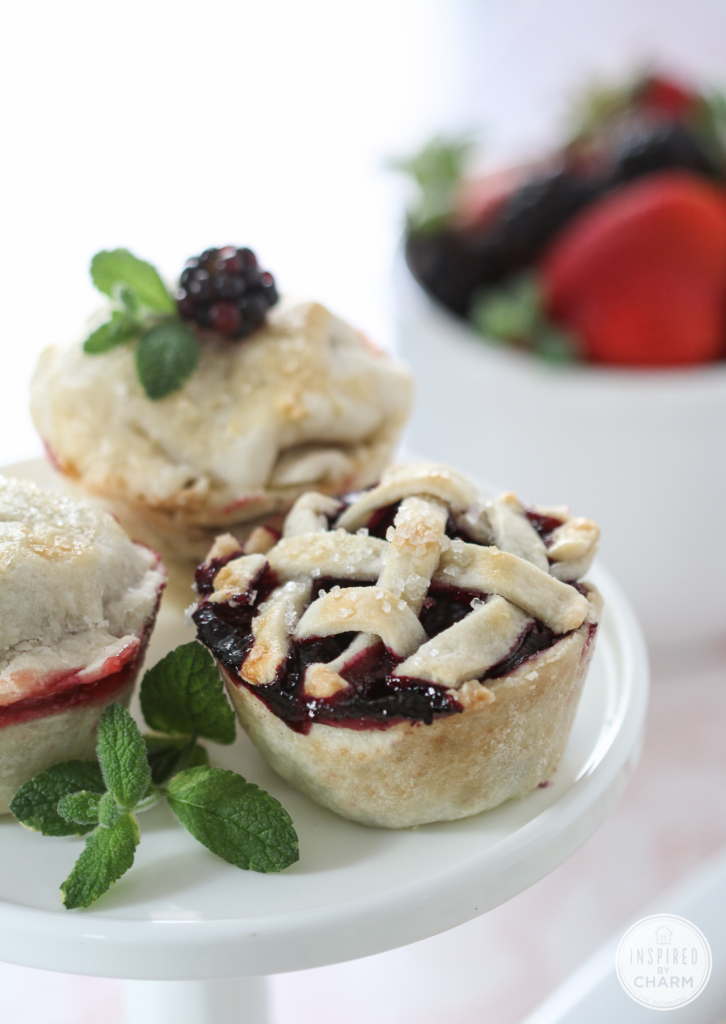 I will admit that these are a bit more challenging than putting together a regular pie. So if you are new to pie making, I suggest getting comfortable with baking a regular pie (I’ve added a few links below.) before moving onto these. 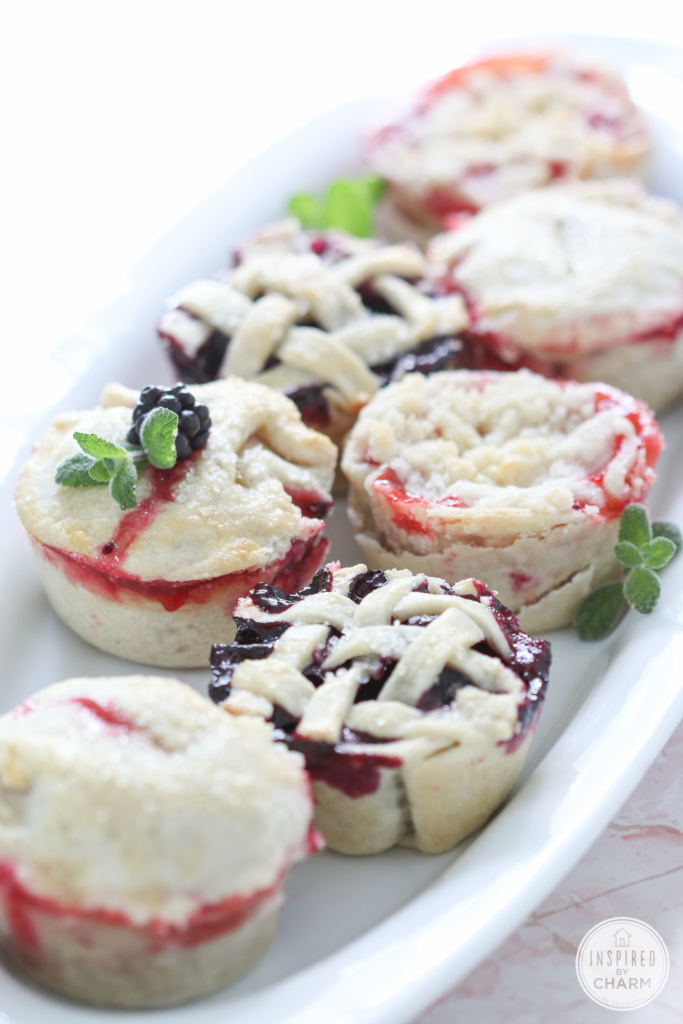 I am so pleased with how my Berry Cup Pies turned out. I can’t wait to try making some of these for fall. Do you feel brave enough to give these a try?

Also, what other pies would you like to see in my A Year of Pie series? 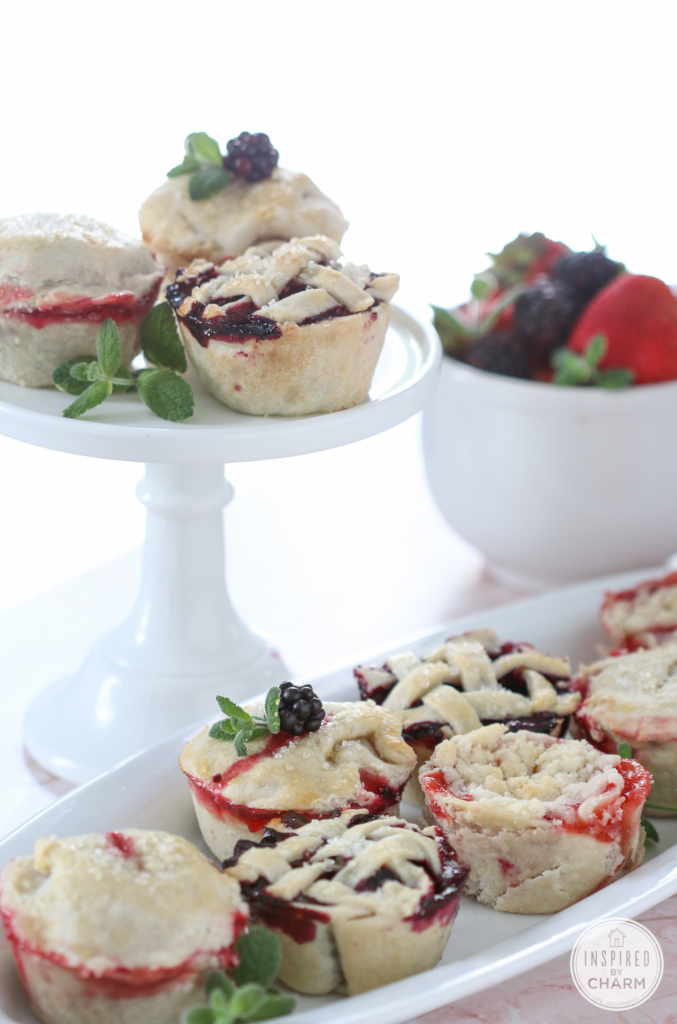 Begin by rolling out your chilled crust on a lightly floured surface. You'll want the dough to be fairly thin. Cut out dough using a circle cutter or bowl that is roughly 5-inches in diameter. In a lightly greased cupcake pan, place each dough circle into a cup. Continue to cut out circles for the top of your pie or strips to make lattice.

Next, prepare your crumb topping in a bowl by mixing together the sugar, flour, and butter until you get small crumbs. Set aside.

Preheat your oven to 350 degrees F.

For the filling (You'll need to make two batch of the recipe above for 12 cup pies.), place berries, sugar, zest, juice, tapioca (and cinnamon, if applicable) in a large bowl and lightly toss together. Divide the filling evenly between 6 of the cup pies. Place a few cubes of butter on top of each filled cup pie. Then put on the top crust and tuck the edges (as best you can) into the bottom crust. Brush the top with egg wash and sprinkle with coarse sugar. Using a knife, cut a small ventilation slit into the top of each cup pie.

Alternatively, you can create a lattice crust with strips of dough. Follow with egg wash and coarse sugar. Or you can simply add about a tablespoons of crumb topping with no additional dough on top.

Bake at 350 degrees F for 20-25 minutes or until the crust is lightly browned and the juices are bubbling. Allow the pies to cool completely before attempting to remove from the cupcake pan.

Serve with a scoop of vanilla ice cream, if desired. 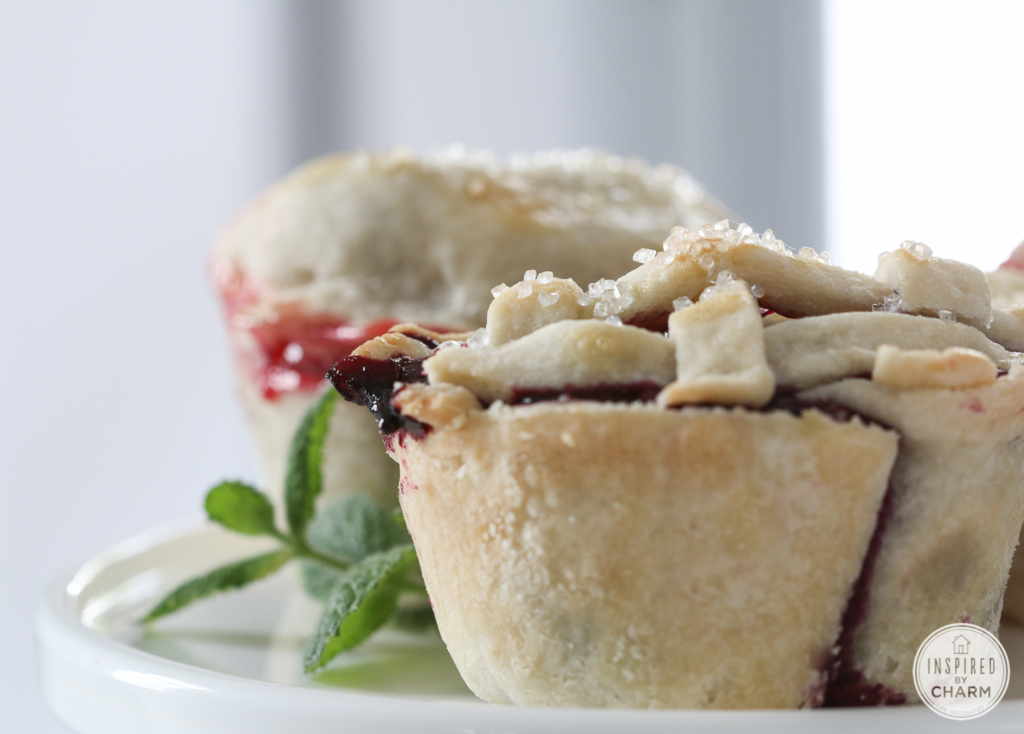 A YEAR OF PIE RECIPES: 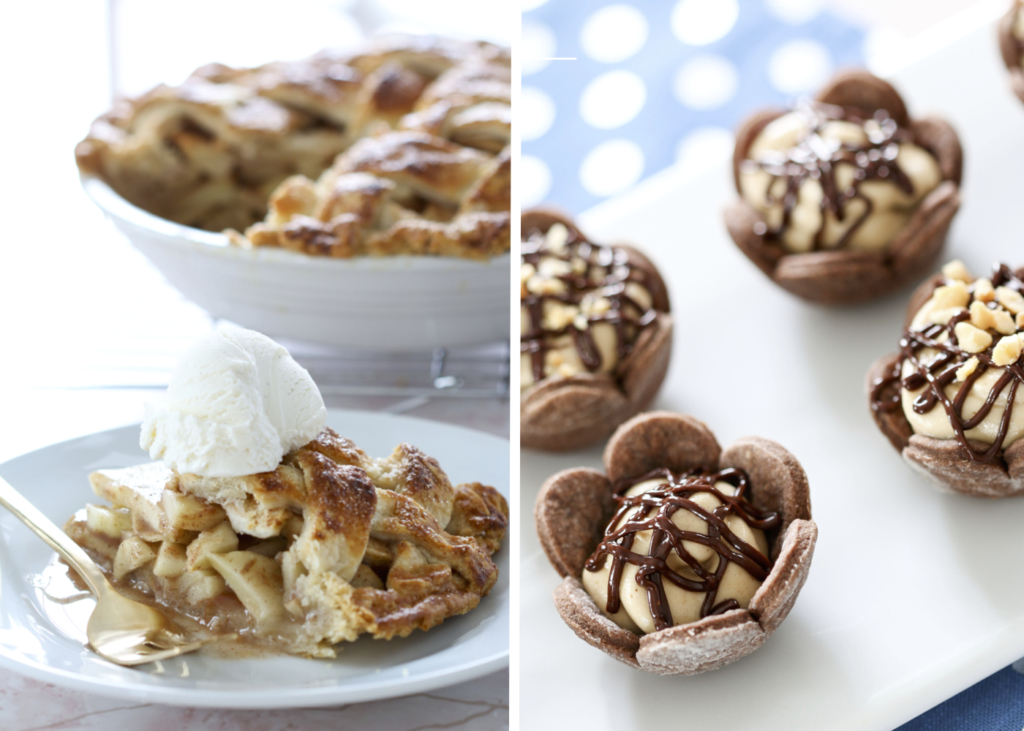 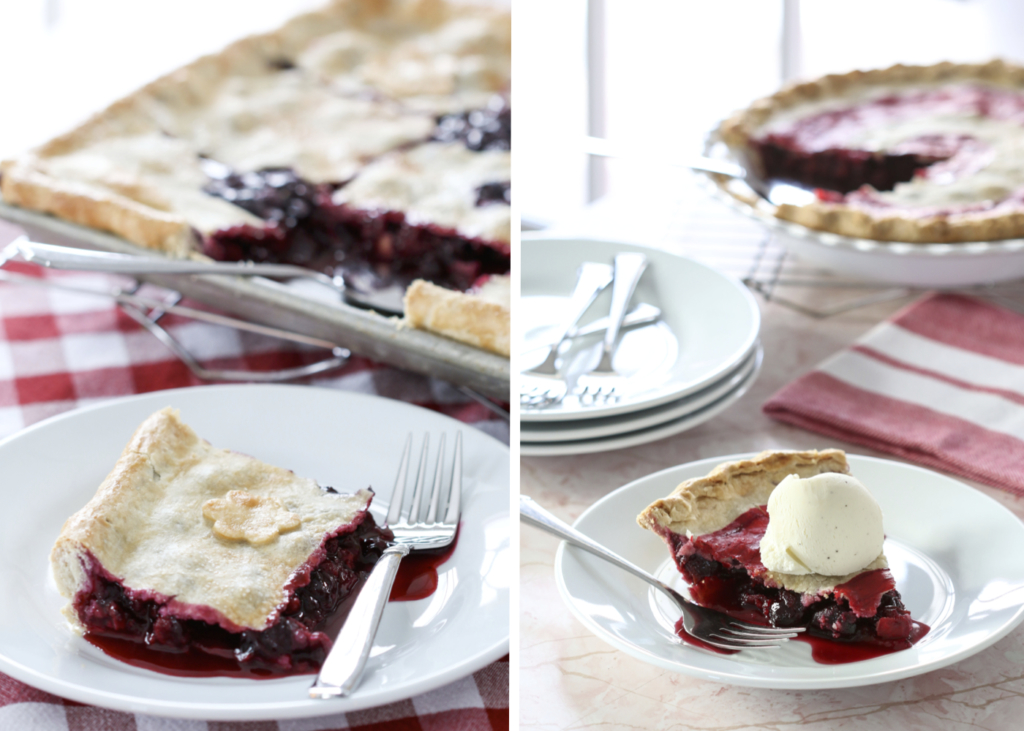 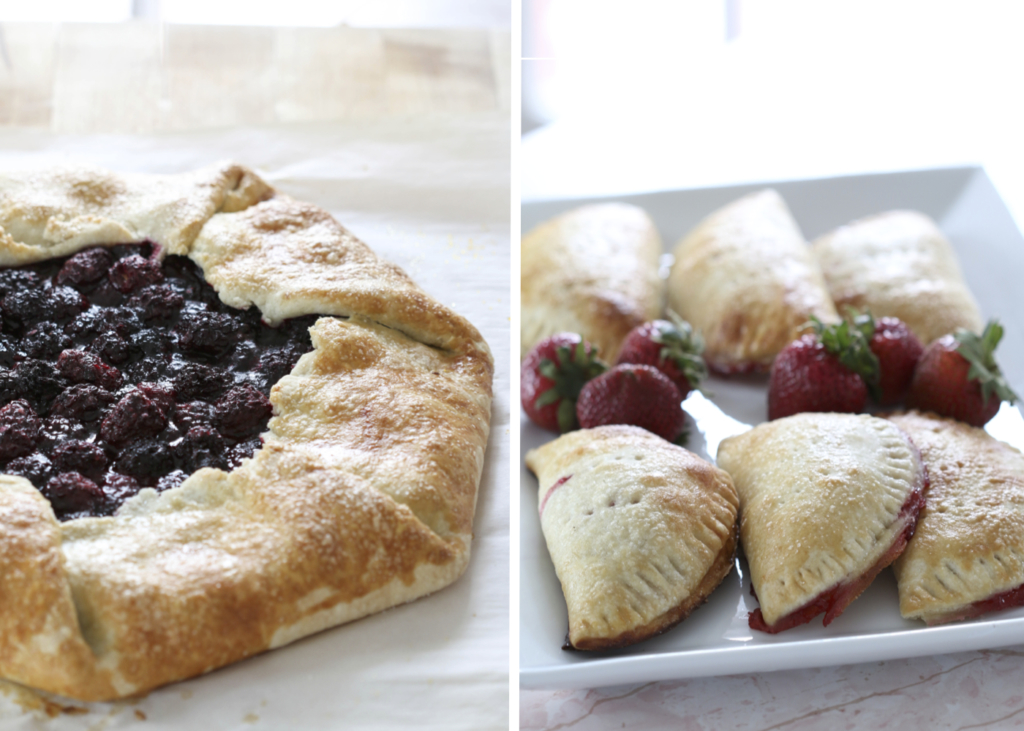 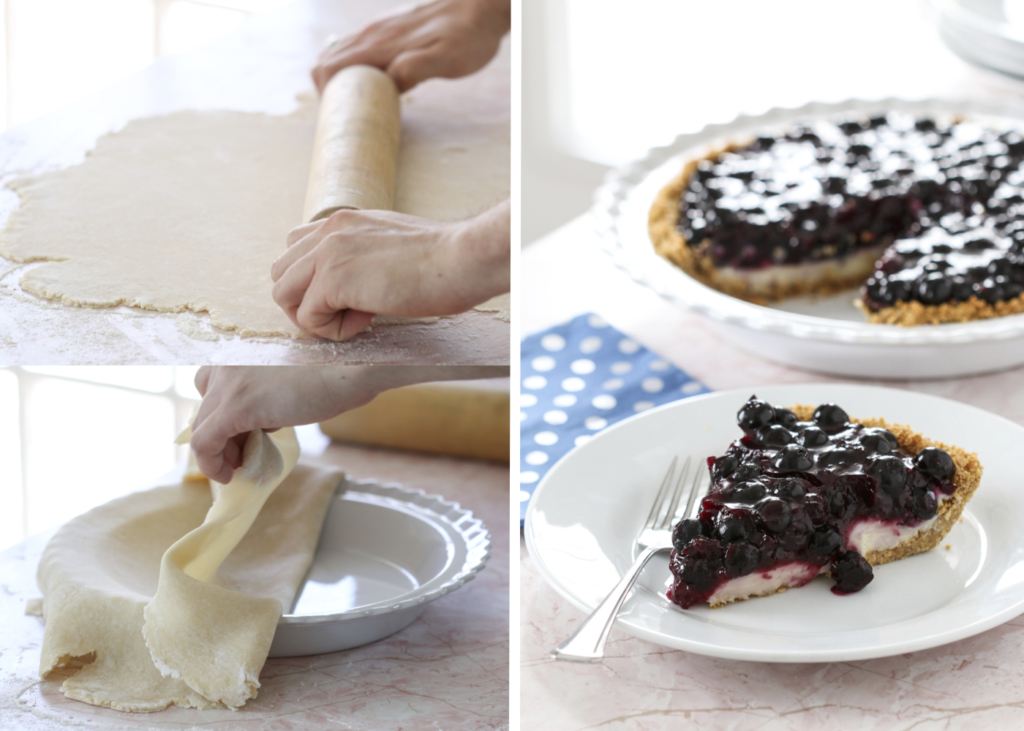 Ever since I started A Year of Pie back in January, one of my goals has been to make cup pies. I’m not sure if there really is such a thing, but I got the idea from the television series Pushing Daisies, which premiered back in 2007. To be honest, I never watched the show […]