i have a wall as you first enter my house/gift shoppe. when my house was first built in 1917, this wall was originally the back of a closet. i assume when the first owners of my little inn bought the house they removed the doors and turned the space into a little nook/office (yeah, people were turning closets into nooks in the 90’s too).

this space has now become my ‘window display’. being in a traditional house, i don’t have a huge window space to decorate seasonal as most cute little shoppes. i believe i mentioned some of this before and have shown you how this wall has changed in the past.

if you followed along with #makingofachristmasshoppe you’ll know this wall used to be purple grape harvest. well, grape harvest doesn’t lend itself well to spring and summer so i figured the wall needed a little facelift. i wanted something bright, warm and fun.

lately, i’ve been a little obsessed with the whole chevron pattern craze. so, chevron is what i decided on. honestly, no other idea really stood a chance.

in my usual style i wanted to mix in a little rustic, lived-in flare to the modern, clean lines of the chevron. i decided white would be my background color and the actual chevron would resemble a linen or burlap. i know, this sounds crazy. but i was going for it!

the good thing about this wall is that it’s fairly small and i paint it often, so if this all went really bad it wasn’t a huge commitment. i also wanted to use paint i had on hand. other than i roll of tape ($7) this project had no additional costs.

now, before we get into the nitty gritty of how i did this, lets take a look at an after picture. 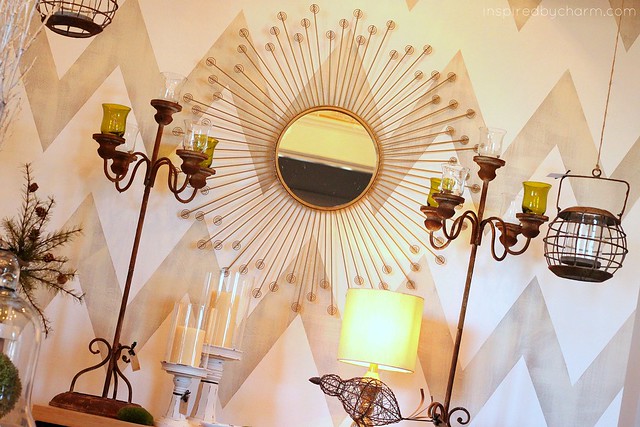 through some odd miracle, i achieved exactly the look i wanted! i love it when that happens.

as i mentioned i started with a grape harvest wall. (oh and i apologize in advance if some of my pictures are not the best. some were taken at 1am.) 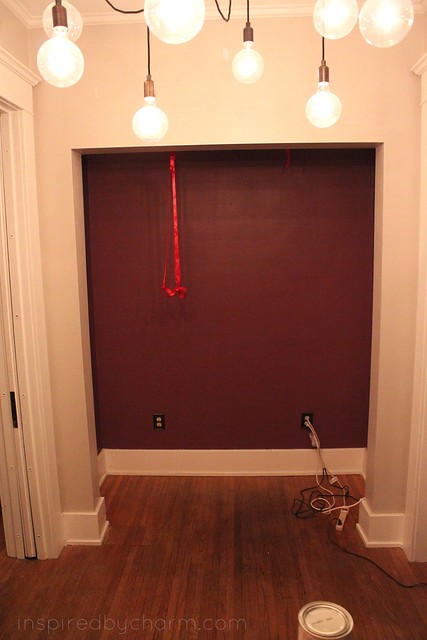 white was my base. i used kilz white satin paint right out of the can. it took three coats to cover (the picture below is after one coat…i think). 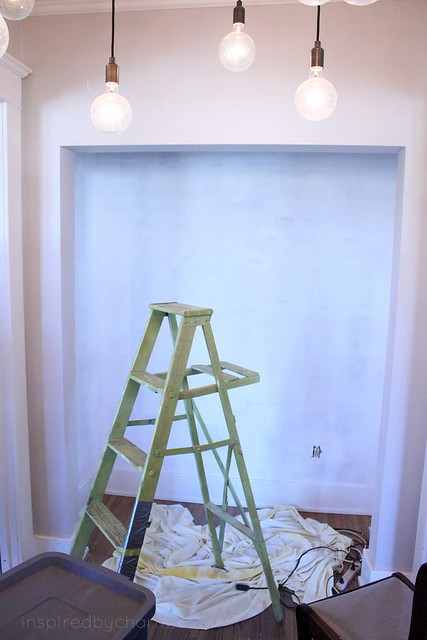 next, i needed to tape off my chevron pattern. this requires a little math, but once you’ve figure it out the process is pretty simple.

first, i determined the length of my wall was 75″.

second, i decided i wanted six total chevron points. one of which would be split in half on either end.

then, i divided 12.5″ in half to get 6.25″. this is half the width and the location where the point from the next row of chevron would meet.

got it so far?

i didn’t worry to much over the height of the chevron or how many rows i would need as the top portion of my wall is covered. to make things simple, i just choose 12″ for the height. 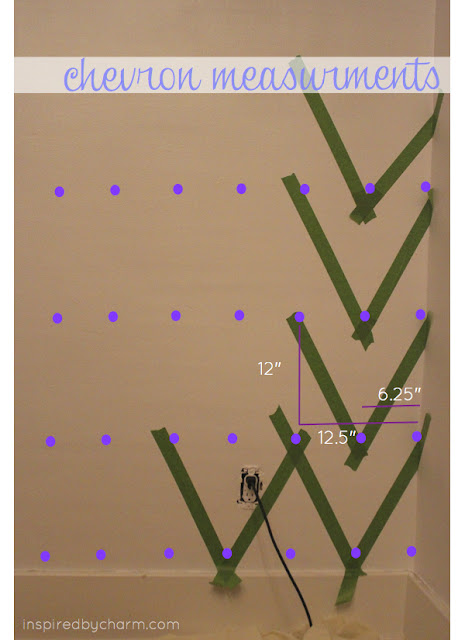 as you can see from the image above you are just going to draw dots (i used a pencil and made a teeny tiny little dots) across your wall. it’s important to use a level for this. my level has the measurements printed on it. you want your lines to be as straight as possible. i started on the bottom of my wall and worked up. i choose to start about two inches from the bottom of my wall so that the first chevron wouldn’t be touching the baseboard.

to place your tape, tear off the length you’ll need to reach from one point to the next, plus a little extra on each side (you’ll see why in the next step). then place your tape on the wall connecting the dots as illustrated in the picture above.

once you get going it all starts to make sense and move pretty quickly. 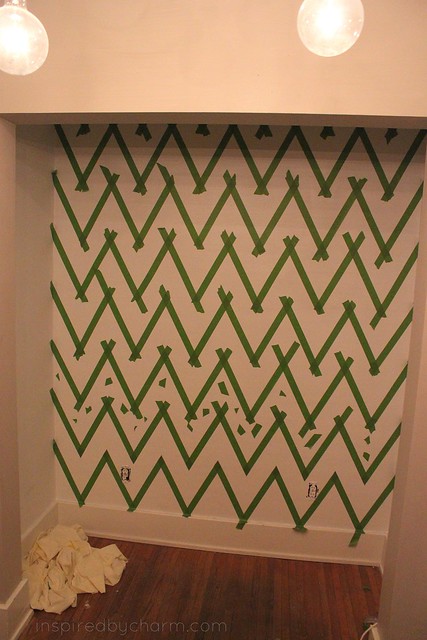 tada! you can see you’ll have some tape that over hangs were you will need to paint. so you’ll need to trim every other row.  i used an exacto knife.

as you can see below, a diamond pattern is created where your tape intersects on the wall (this is why your tape needs to be a little longer). this diamond acts as a great guide of where to trim. 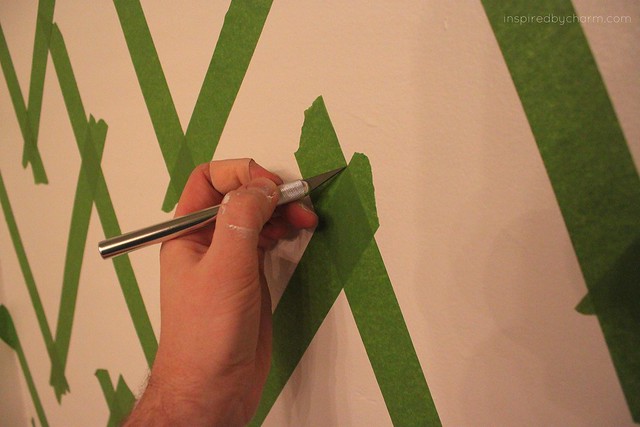 and here is the whole wall trimmed. i used the pieces of tape that i trimmed of to mark the areas i didn’t want to paint.

i noted a couple points on the picture below where i cut and where i didn’t. 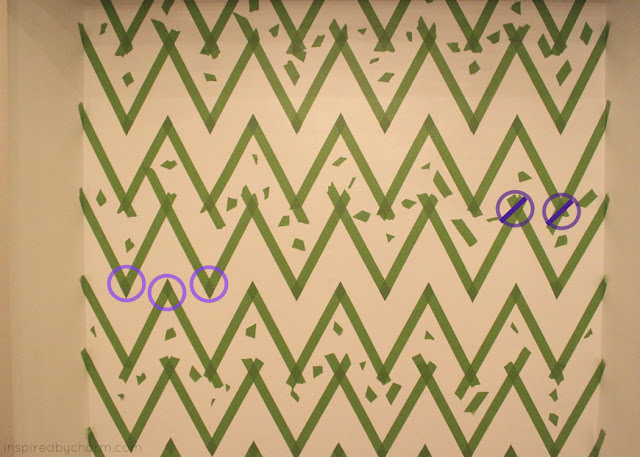 please note that with this method the white chevrons will be thicker than the painted ones.  the tape adds an extra inch on either side. if you want your stripes to be even, you’ll have to adjust your math.

it’s finally time to paint! as i mentioned i used paint i had on hand. one was a light cream/tanish color. the other was a darker grayish brown.

i bought really cheap brushes at walmart. the goal here was to create a linen/burlap look, so i wanted my brush strokes to be very obvious and a cheap brush would give me that look. W

hen painting, i used this cardboard box as my paint palette. i added a little of each color to the box and then painted from there. i mixed both colors as i painted and kept my brush a little on the dry side. 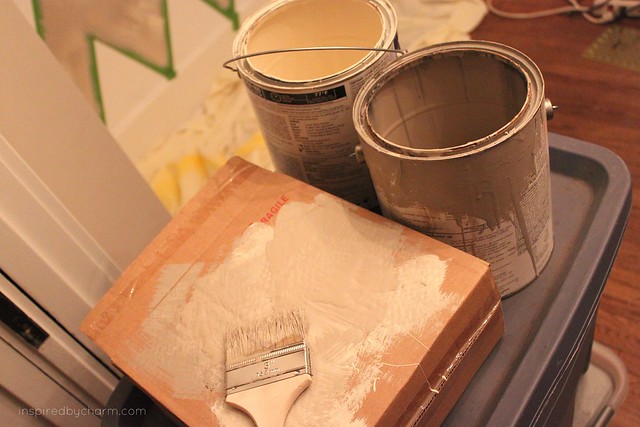 this was the look after the first coat.  you can see the variation in color and a little texture starting to happen.  at this point you really couldn’t see any more white where i had painted. even though i kept things light i still had full coverage. this is important to keep the crisp lines important to a good chevron. 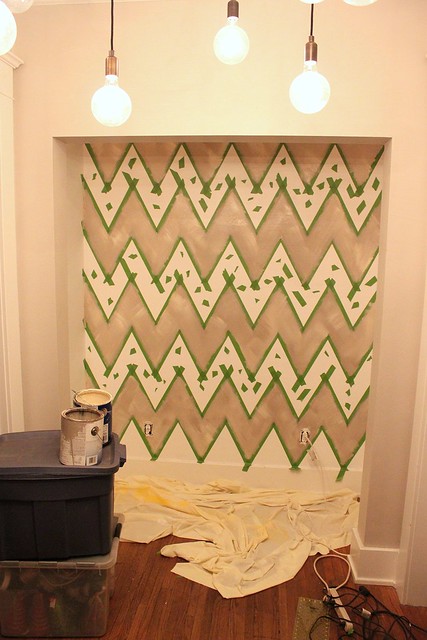 once everything was dry i went back in with the lighter color. 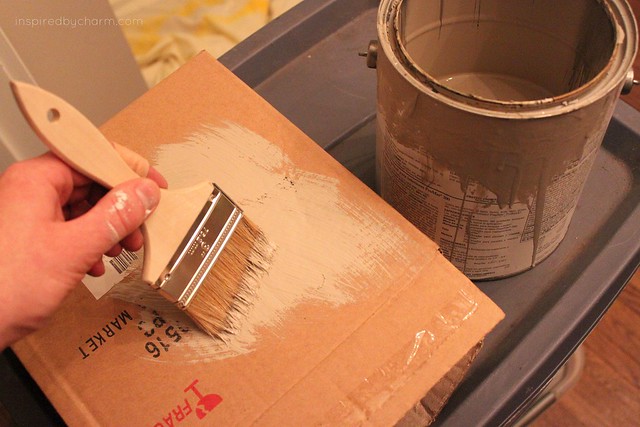 this time i used a very dry brush with just a little paint to give very defined brush strokes. 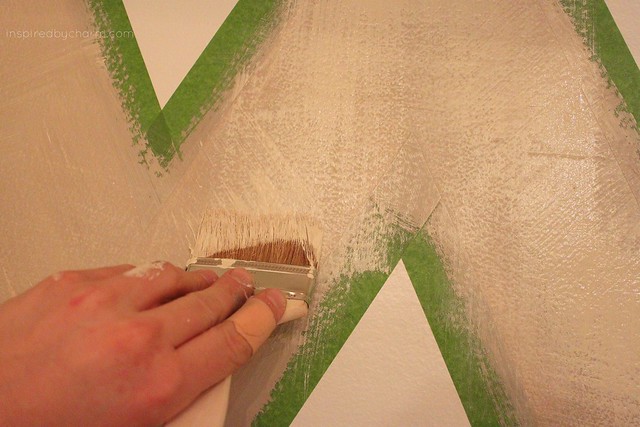 i did this once going vertically.

i then waited for that to dry and did the same thing horizontally.

this gave me a weaved/cross hatch look. i found leaving the paint dry in-between coats is essential or the paint would just smear together and you couldn’t see your brush strokes as well. 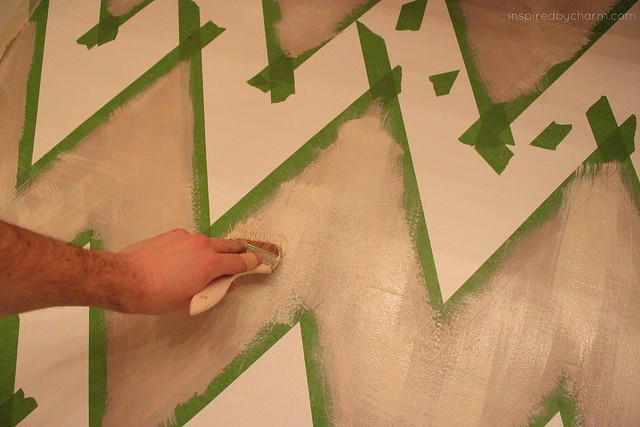 after that i peeled off my tape (my favorite part).

i then when back through with my white paint and touched up a couple of the areas where pencil dots were exposed or where i accidentally got the colored paint.

after that, i got my display on! 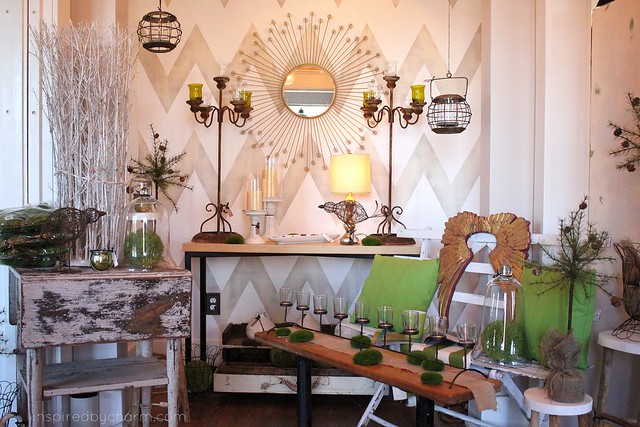 this is an area in my gift shoppe, so it’s obviously decorated a little bit different than i’d decorate my home. this set up is obviously not very functional. 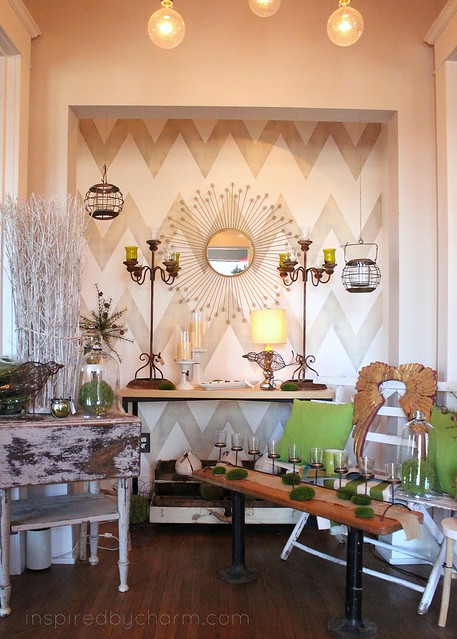 but what it lacks in function it makes up for in pure eye candy!

here’s a close up of the chevron texture. love it! 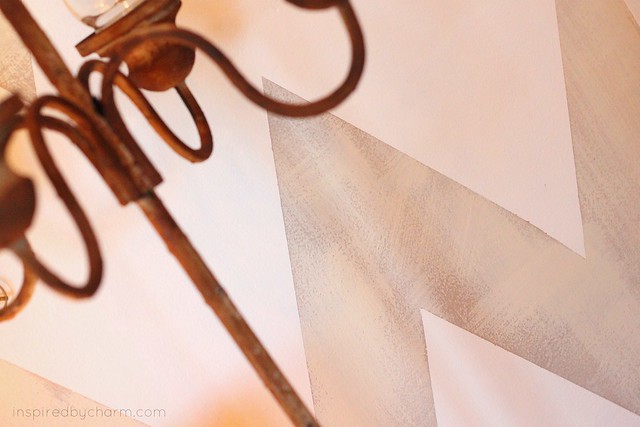 changing out display and merchandise in the shoppe is always a fun process for me. but it takes a lot of time and brain power. a lot. i need to make a mess and move everything around until things start to click.

this was probably one of the harder season changes. as i mentioned, i plan to making some changes in the merchandise i carry, so i really had no new items to set-up my mid-winter/spring displays. i was a bit nervous.

when i’m in a situation with little or no new merchandise, i usually look to color to help create my display. for this particular display i used gold, white, cream, rusty metal and a pop of green.

things tend to take on a whole new life when they are paired up differently or used in a different way. 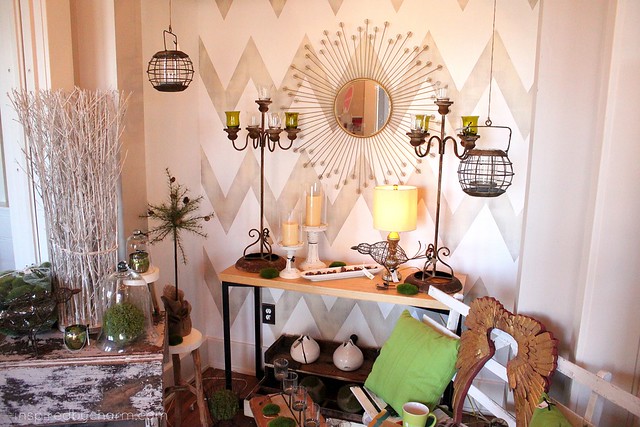 would i change things if i had an unlimited budget to buy what i wanted? yes.

but, from nothing to something, i think it looks pretty darn good.

so, that’s it folks, my chevron wall, a tutorial, and a couple little tidbits on how i decorate my shoppe. 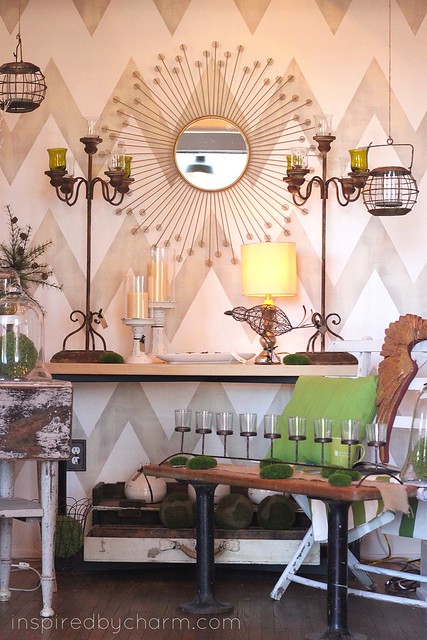 what do you think?

ps. two other quick things before i go.

just a reminder you can follow me and my crafty adventures on facebook and twitter. you’ll often get a sneak peak or inside look on what i’m doing before it ends up here on the blog. you can click the button below to get connected.

and a huge thanks to everyone that sent emails and posted comments in response to going american made in my shoppe. unfortunately i have yet to go through all of those comments and emails. i’m hoping to find some time this weekend. i’ll be in touch soon!

i have a wall as you first enter my house/gift shoppe. when my house was first built in 1917, this wall was originally the back of a closet. i assume when the first owners of my little inn bought the house they removed the doors and turned the space into a little nook/office (yeah, people […]