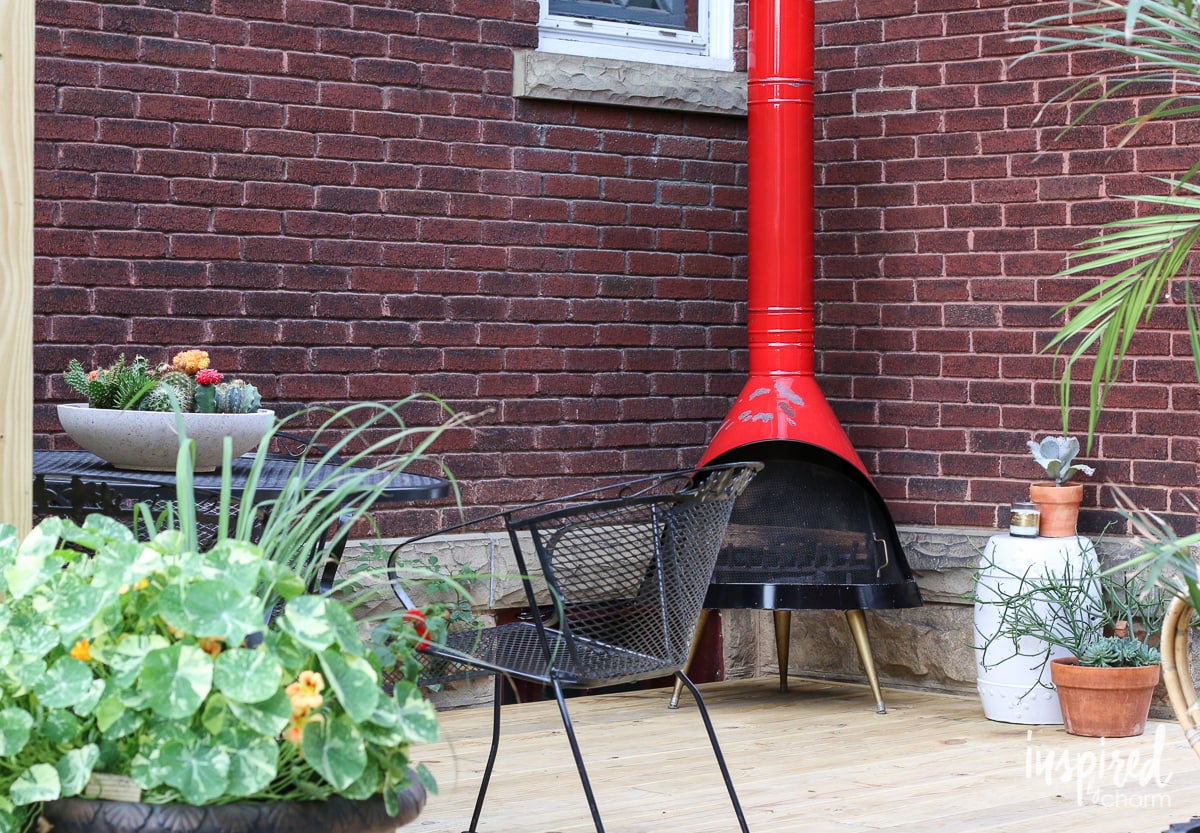 Without a doubt, putting this deck on the back of my house is one of the best home improvement decisions I’ve ever made. This past weekend I inaugurated the deck with the 3 Fs: Friends, Food, and Fire. Despite it’s unstyled state, fun was had by all.

Even though the space isn’t finished yet, I thought I’d pop in today and share some of the small changes I’ve made over the past couple weeks.

First off, remember those shed doors that I wanted to paint black? Well, we can check that project off my to-do list. 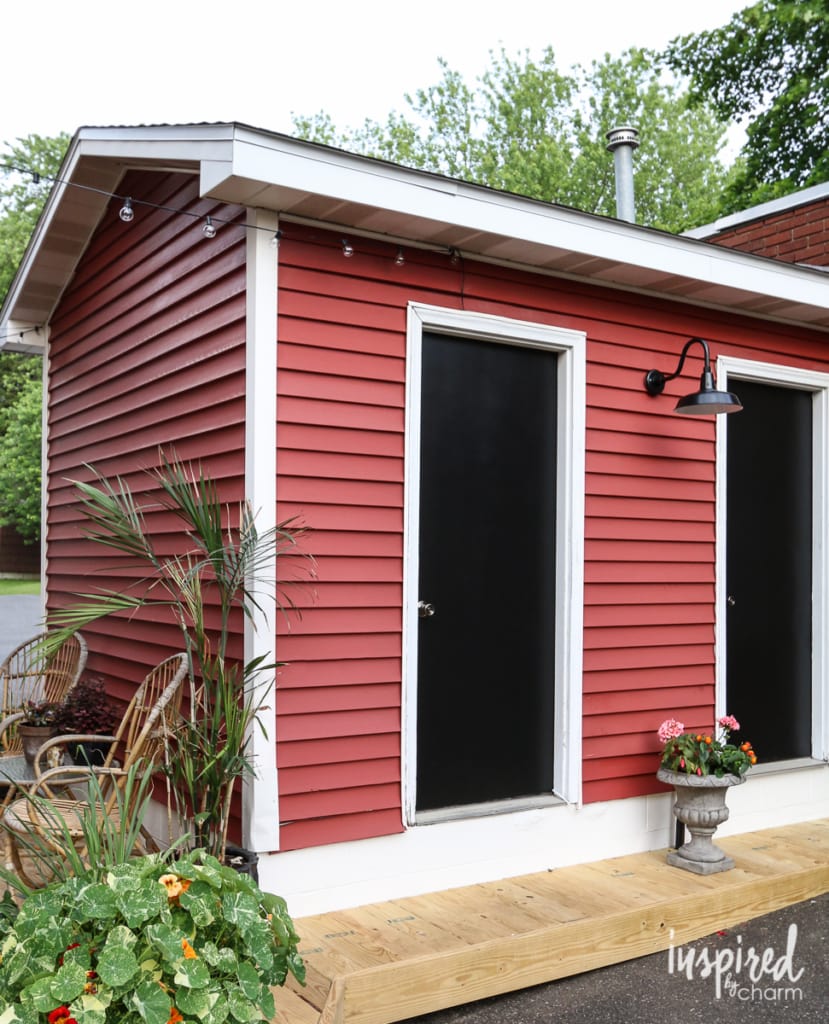 I love how they look. Apparently, black is the new black. When I was painting, however, I realized that the wood trim around the door needs to be replaced. It might be hard to tell in the picture, but the wood that’s close to the ground is weathered and splitting. I tried touching up the paint, but that didn’t cut it. 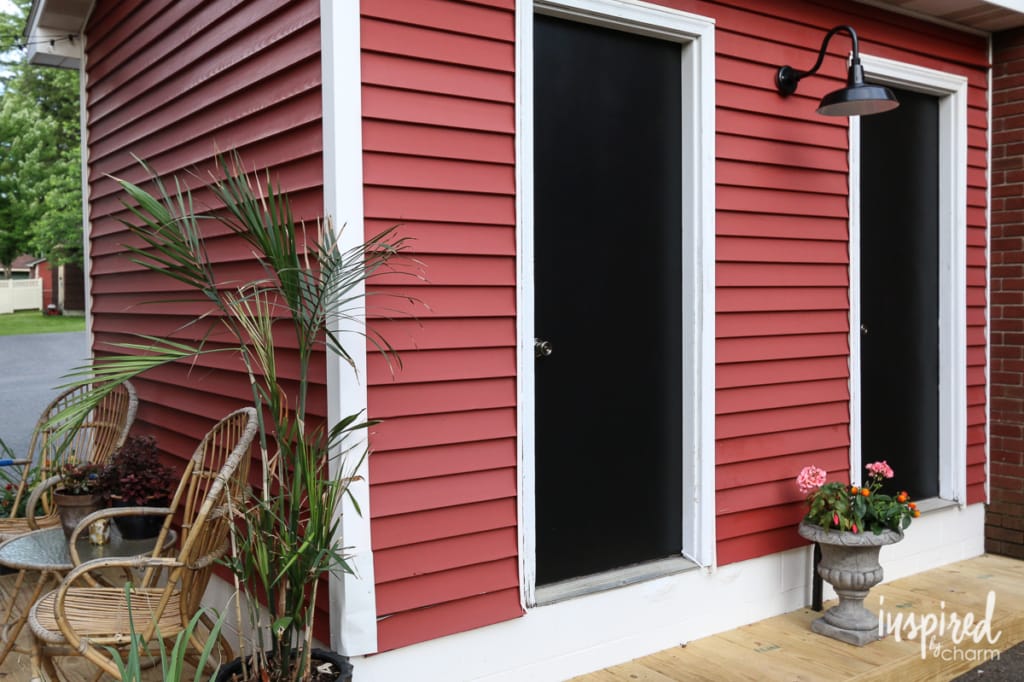 I also hung a barn light between the two doors. Previously, there was a crusty rusty flood light there. I’m not sure a barn light is the best lighting choice-style wise, but I’ve decided that this space can be eclectic. Whatever. To me, this light is super cool and functional. 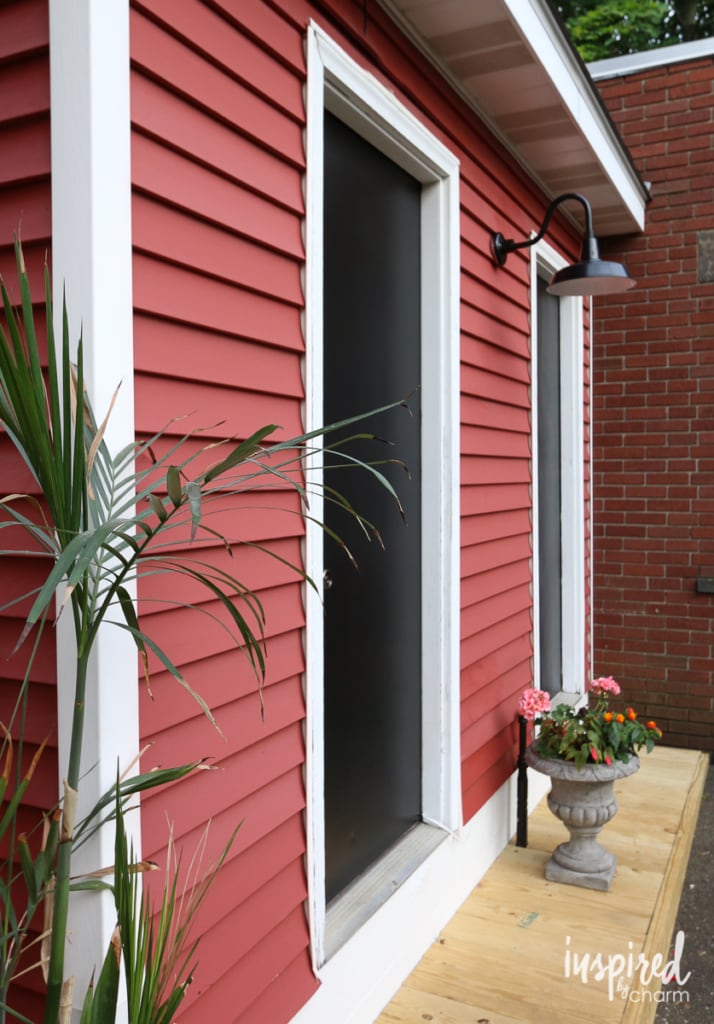 You will also notice that I strung some patio lights. I researched options ranging from industrial outdoor lights to super inexpensive string lights. The lights that I chose fell somewhere in between. What kept me from purchasing the industrial lights that I liked was the fact that there were only 15 lights per strand, and they used fairly large bulbs. Although that would have worked well in a large space, I think it would have been too bright on my deck since I wanted more of a twinkle effect. This option works better for that, and it saved me a few bucks. 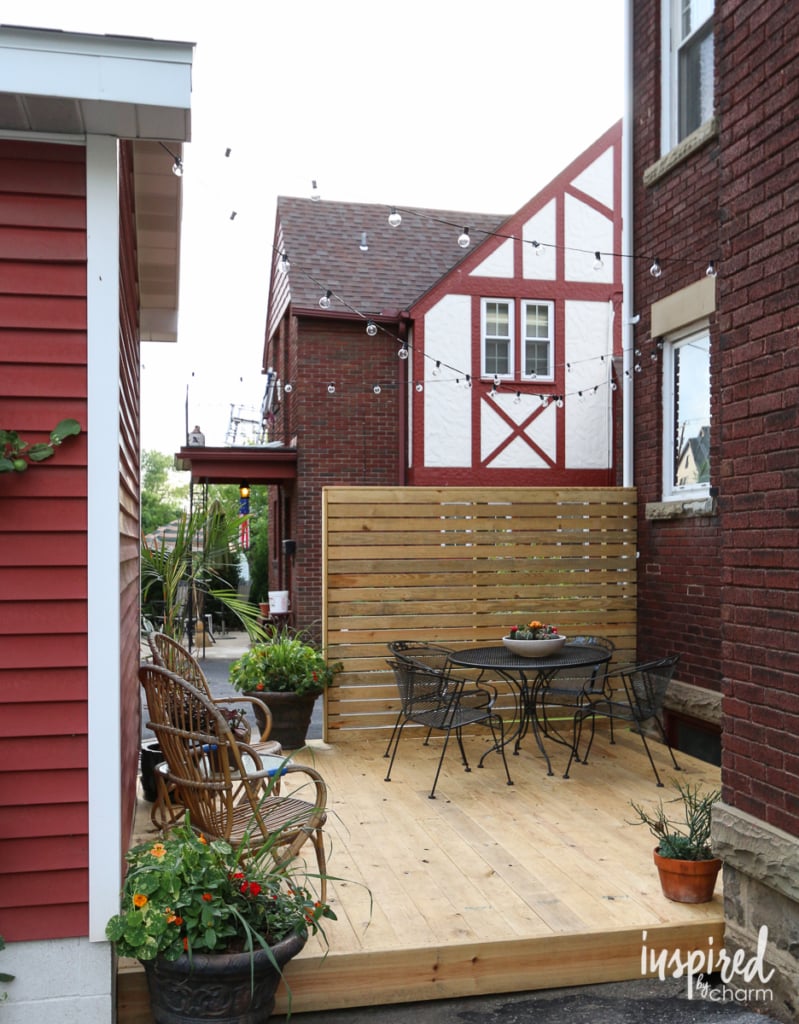 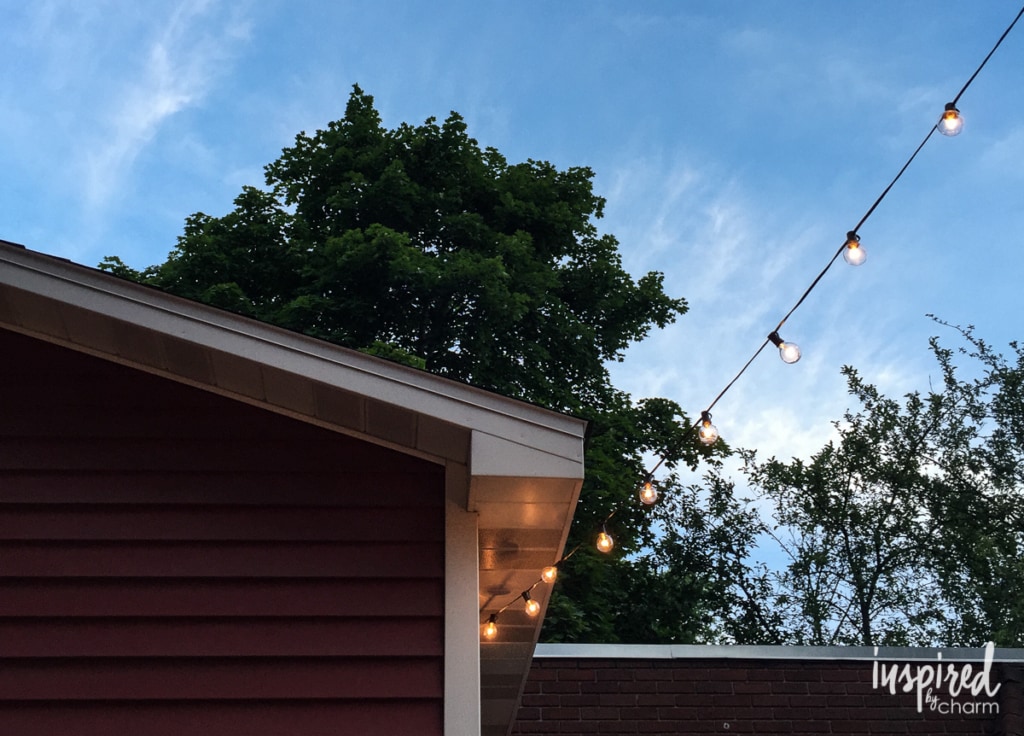 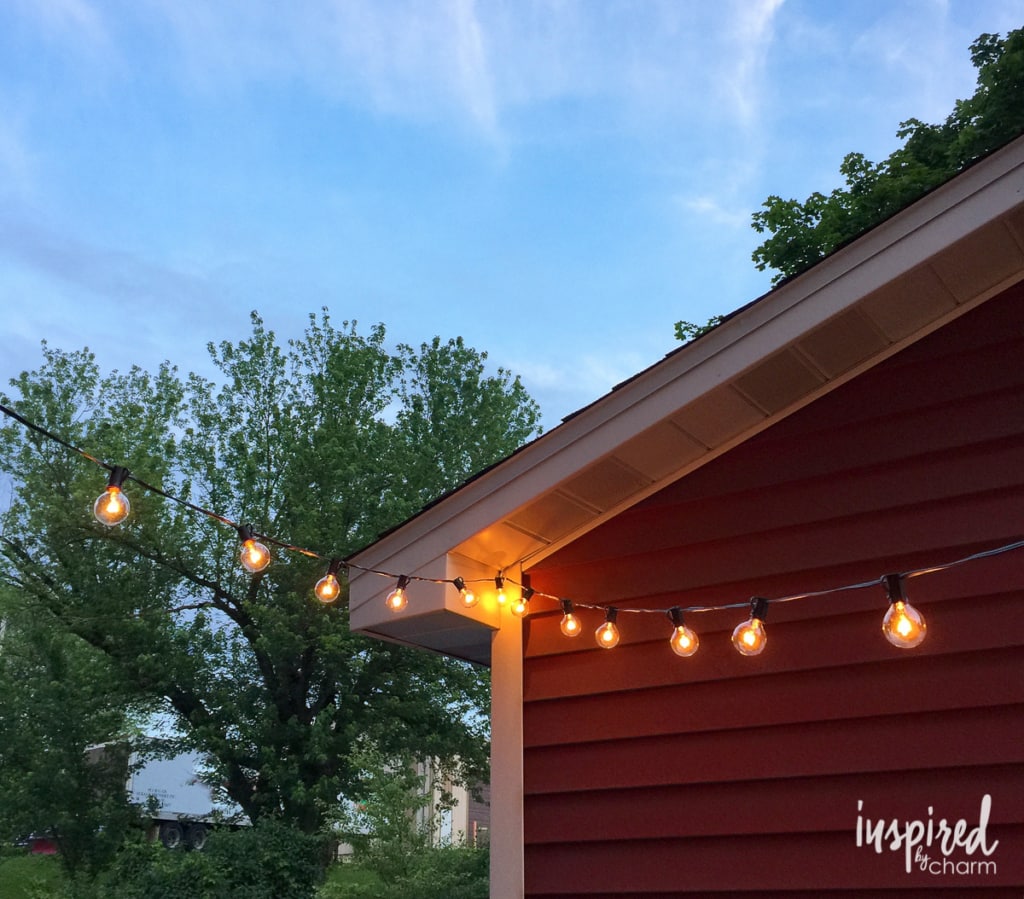 I also made several decisions about furnishings. Instead of making this space a dining area, I decided to set it up for conversation. I pulled out the bamboo furniture I thrifted a while back. It will get a coat of glossy black paint and be positioned in front of the shed. 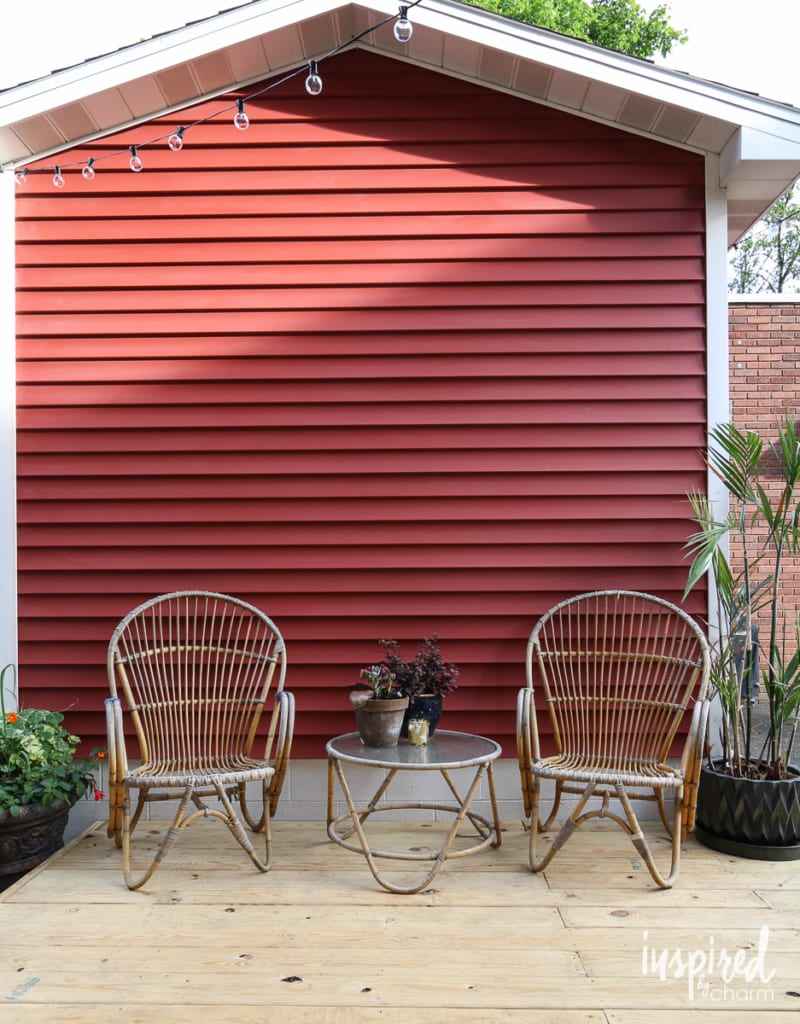 Along the new privacy wall and brick wall, I’m going to have a cozy sectional and a coffee table. Although I did want a dining table outdoors, I think the sitting area will function better most of the time. Plus, if there is food, people can set their plates and cups on the coffee table. I’m going to store the iron table and chairs in the garage, so I can always pull them out if extra seating is needed. 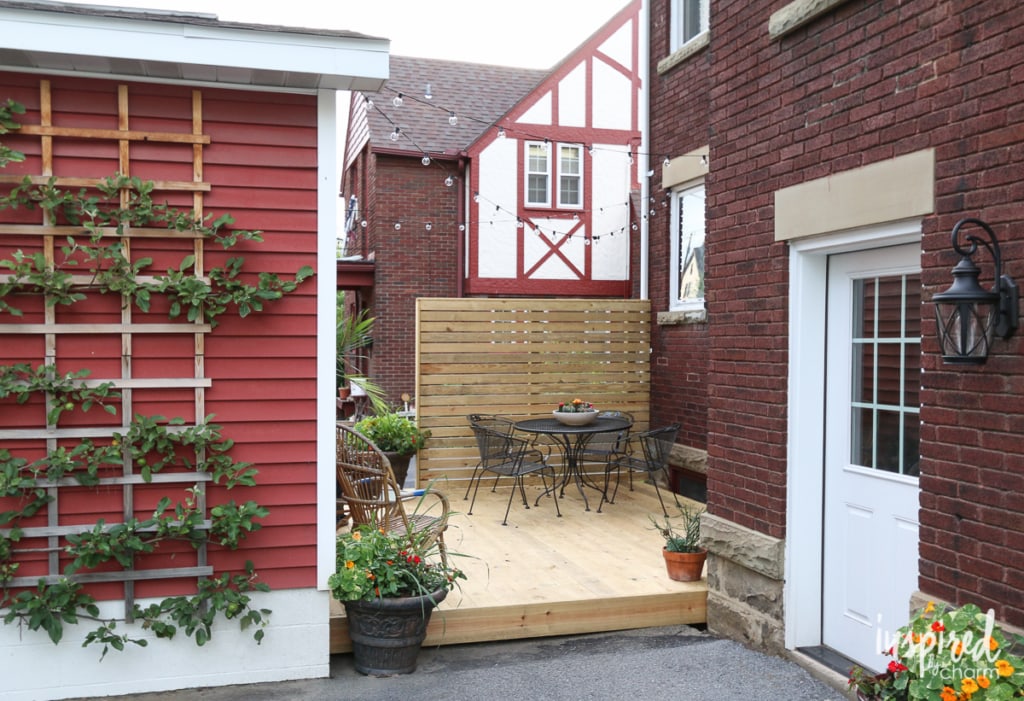 Anyway, more on that soon.

Finally, you may remember that back when I first starting talking about this deck, I mentioned wanting a fireplace / fire pit. Now, I know what you’re thinking, “Michael, fire and a wood deck don’t go together.” I hear you. Trust me. For weeks I stressed about how to get a SAFE fire feature on this deck. Initially I thought of a standard fire pit placed on a few cement blocks, but I couldn’t find the right size or style pit. Then I thought about one of those new propane units, but most of them were too big and just not to my liking. Plus, deep in my heart, I really wanted something that burned real wood. I was stuck. 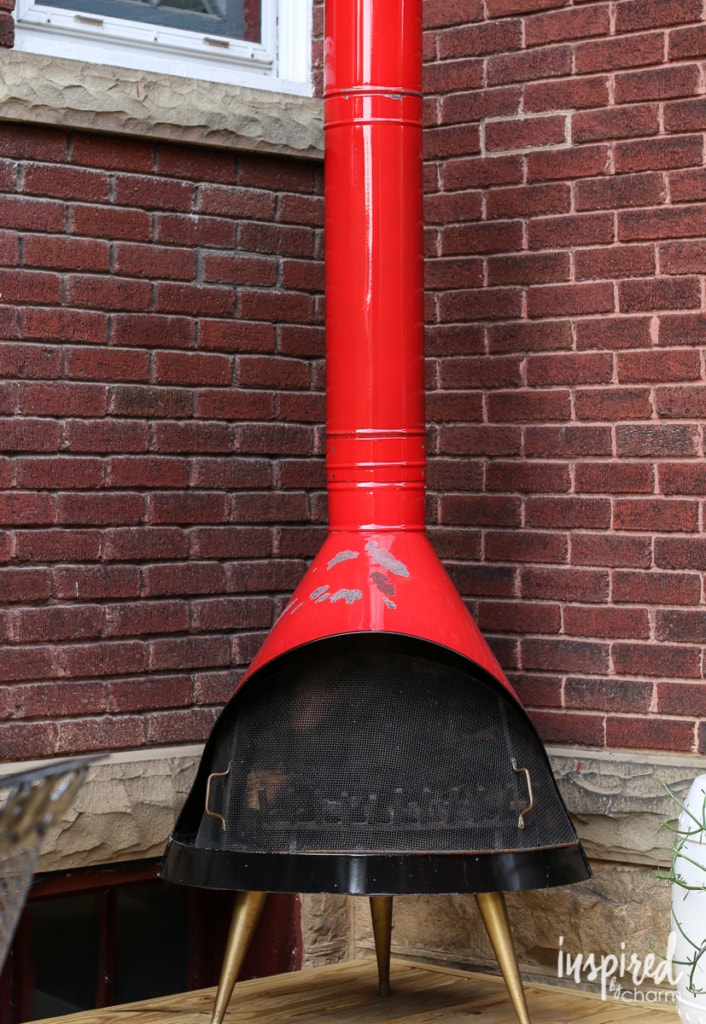 Then, like a glorious beam of light shining from the sky, I was saved! I stumbled upon this vintage mid-century fireplace on eBay and just knew it was the one. The size was perfect, the color was awesome, and the seller was willing to ship it to me! 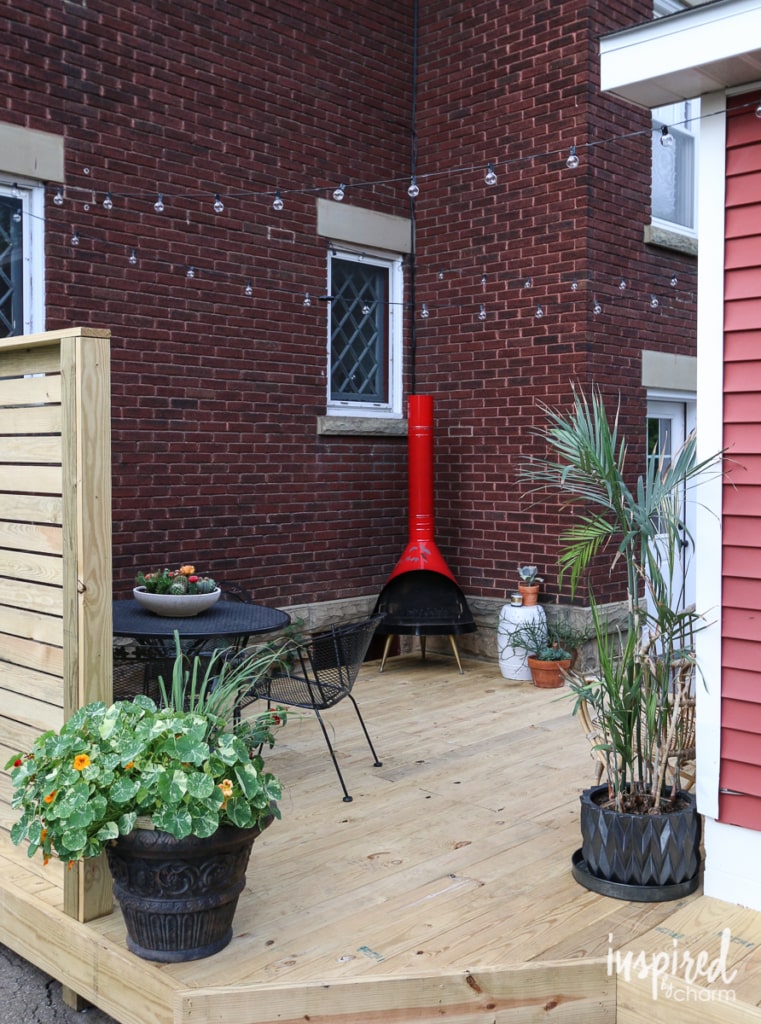 Rooftop Antiques, from whom I purchased the fireplace, were hands down among the the nicest sellers on eBay. They were quick and responsive, shipped crazy fast, and even followed up. (You can see a picture on Instagram of how well they packed this thing.) I can’t recommend them enough. Now I’m an official stalker, constantly checking their site for gorgeous new goodies. 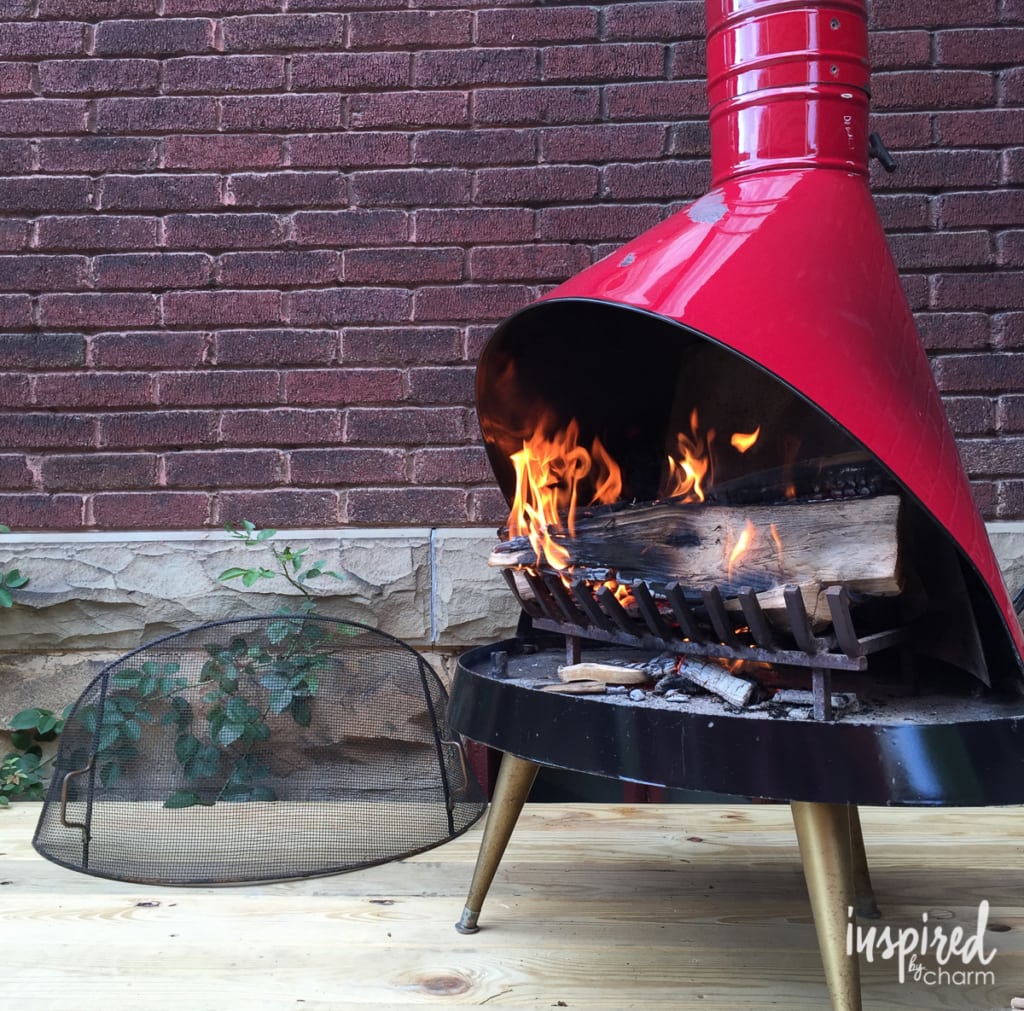 The fireplace also had its inaugural lighting over the weekend, and it worked perfectly. Because of how it’s positioned, nothing gets too hot around the unit. It comes with a screen, so random sparks are contained. It’s proving to be the safest (and prettiest) option. We even roasted marshmallow and made s’mores. It turned out to be everything I wanted and more. 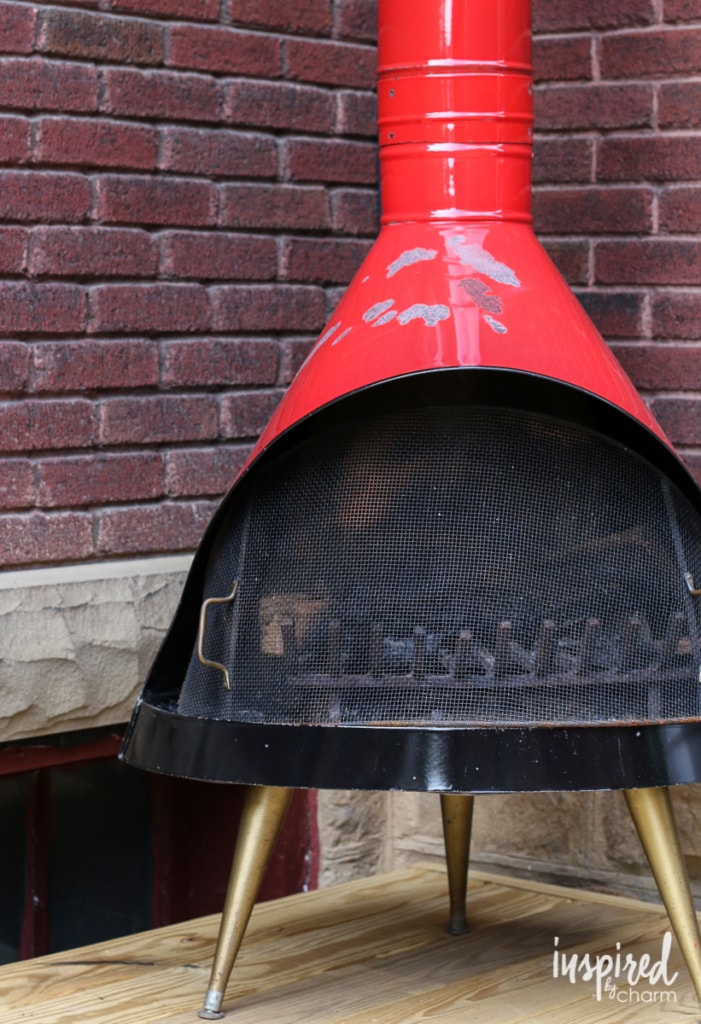 As you can probably see, there is some chipping on the enamel. At the moment, it doesn’t bother me too much. However, if that changes, I may have the piece refinished this winter. Currently, it also sticks out like a sore thumb. I’m confident, however, that some outdoor pillows and plants will help bring everything together. 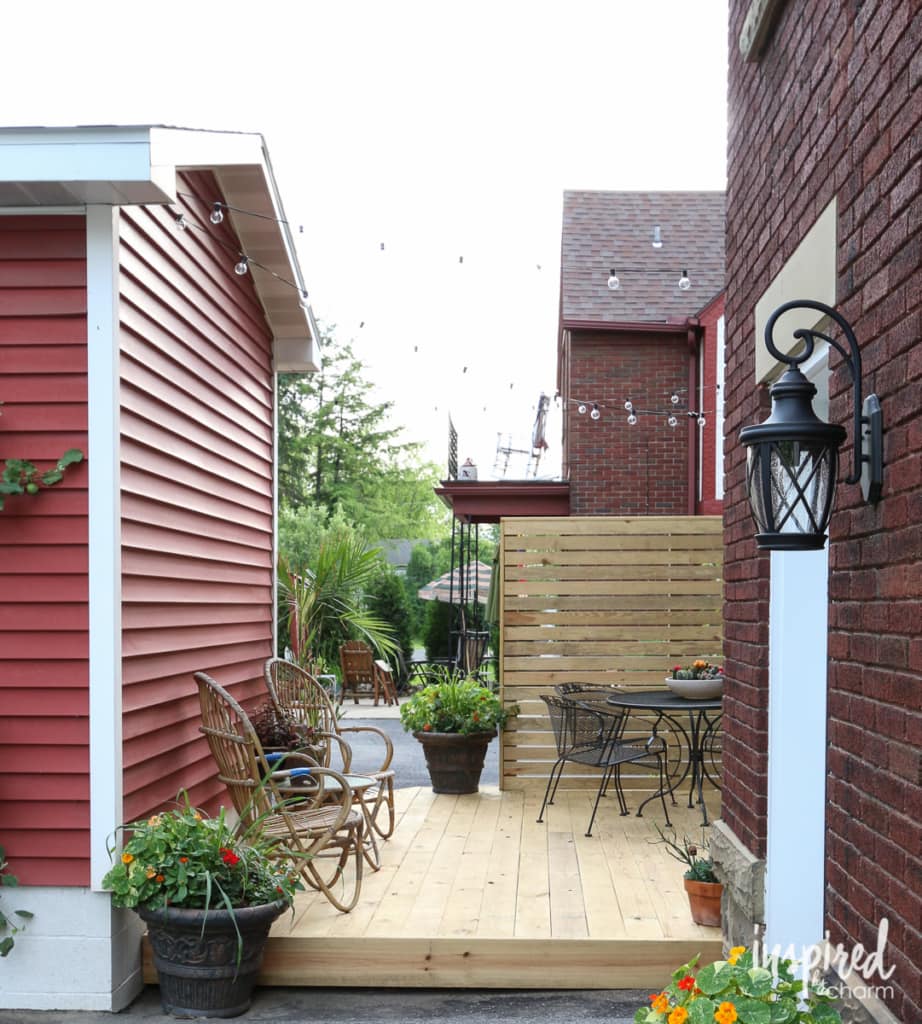 As far as deck updates go, that’s about it. You may have noticed that there is also a bunch of other random plants and tables scattered around. It’s on the verge of being a hot mess. Please know that I’m just experimenting with different things to see how the space will work. As they say, it looks worse before it looks better.

What do you think of the progress so far? Next time I’m back with an update, I promise things will be looking more styled. Until then, enjoy your own 3Fs!

Without a doubt, putting this deck on the back of my house is one of the best home improvement decisions I’ve ever made. This past weekend I inaugurated the deck with the 3 Fs: Friends, Food, and Fire. Despite it’s unstyled state, fun was had by all. Even though the space isn’t finished yet, I […]