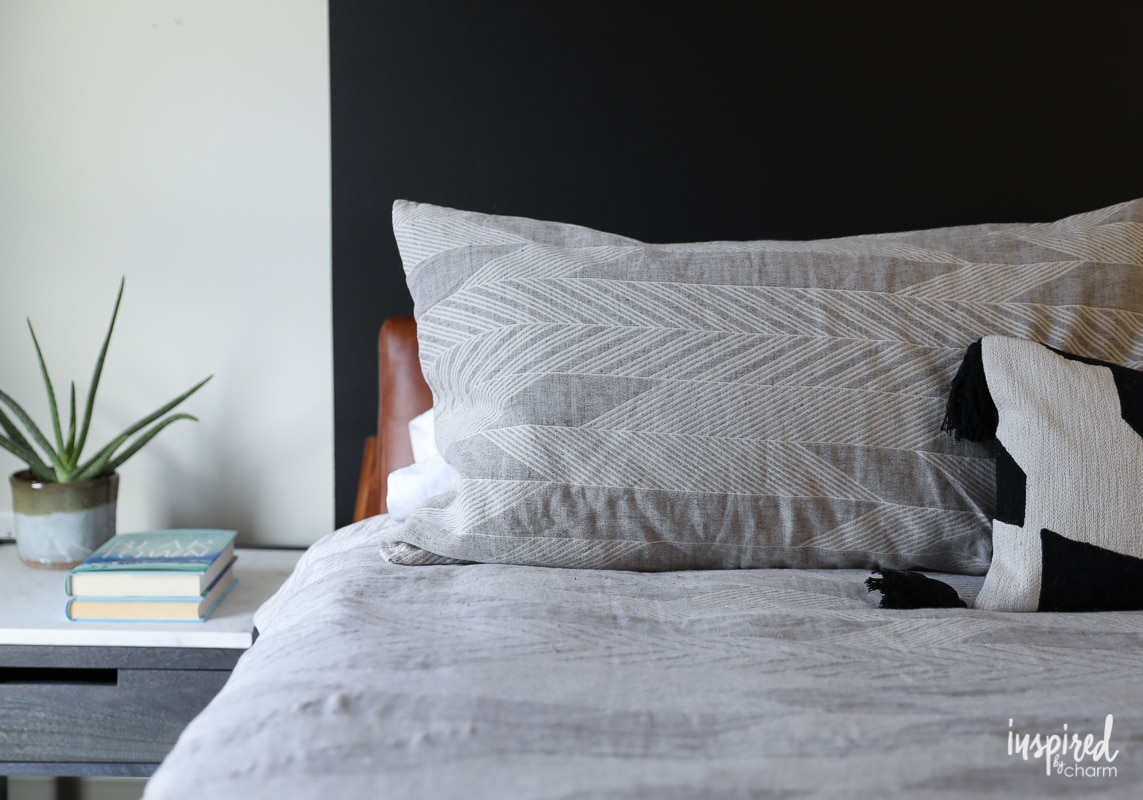 It’s been a while since I’ve given you an update on my apartment. This past weekend I did some planning and painting, so I’m excited to share a few changes happening around here. Let’s start with a bedroom update and some bedroom decor ideas. 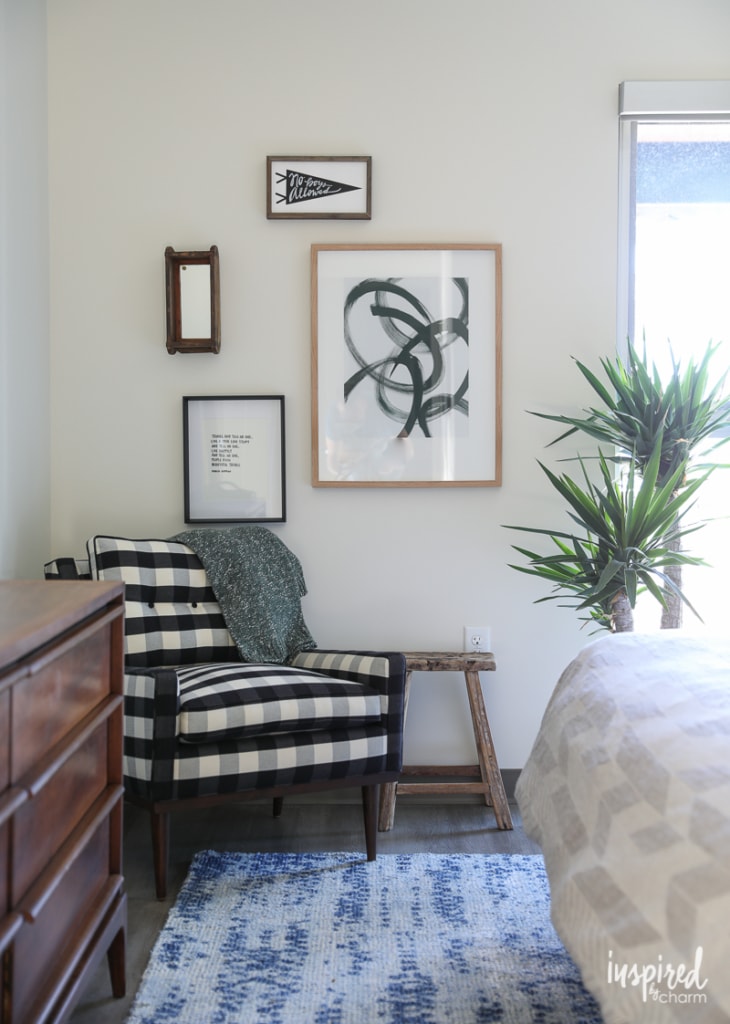 To be honest, sharing an update like this makes me a bit nervous. In recent years, blogland has turned into a place of “beautiful afters” with fewer postings of the “not-so-great-in-betweens.” I’m hesitant to share my in-process photos for fear of premature judgment. However, I remind myself that most of us are in-process and that the vast majority of rooms don’t just magically come together. So, here we go.

We haven’t peeked into my bedroom since June. I’ve actually been waiting to update this space until my dresser arrived. I ordered it in May, and it was on backorder until late September. Flash forward to a couple weeks ago when the dresser got “lost” in shipping from their warehouse. I was pretty angry about the whole situation so I decided to just cancel it.

That meant it was time to revisit the space with a new direction in mind, and that’s exactly what I did. 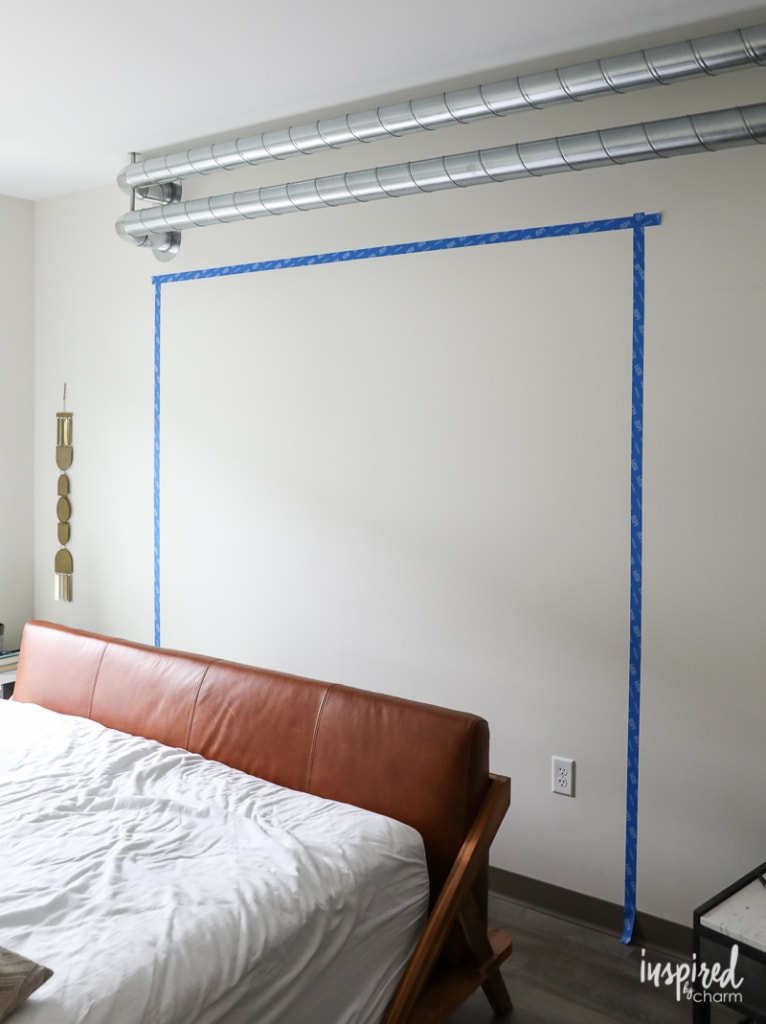 As you may recall, I had considered painting my space. However, I feared to do so because this home is somewhat temporary, and everything would need to be repainted at the end my lease. So, I decided to meet in the middle and just do a little painting to create a few feature walls. It’s all about compromise, right? This past weekend, I painted two walls, one in my office and one in my bedroom. And this is what it looks like right now in my bedroom. 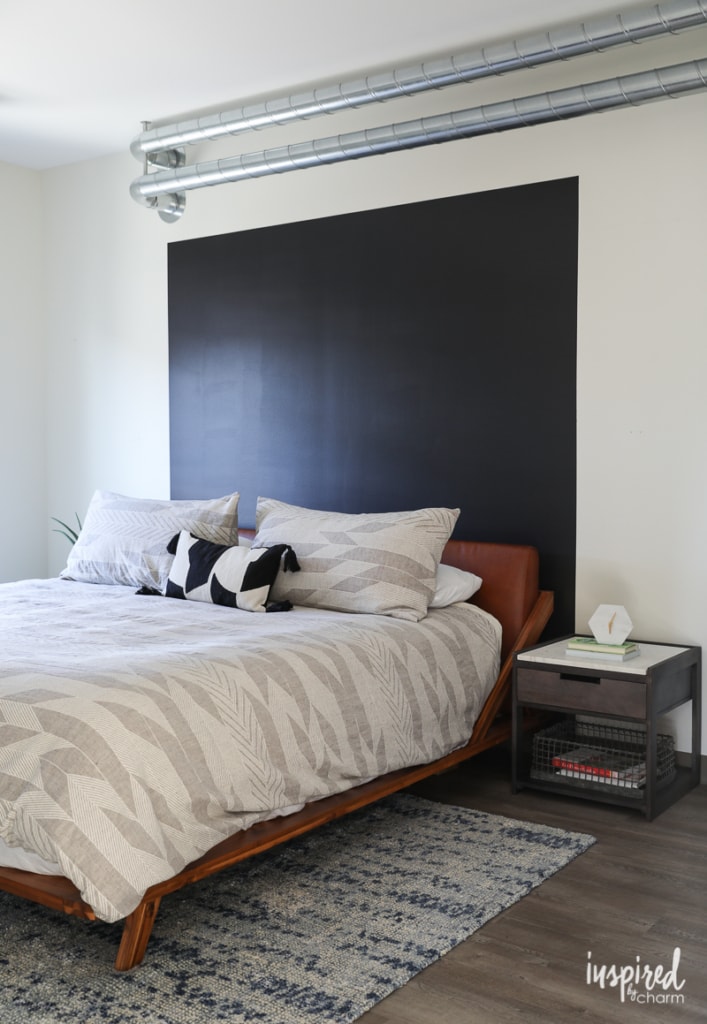 Yes, it’s stark and seems out of place at the moment (hence, my fear of sharing in-process photos), but I do have a plan.

The color is Black Magic from Sherwin Williams.

My thinking for this space is “Masculine Rustic Modern with Charm.” I realize that doesn’t help much, but I hope it will make more sense as the room comes together. 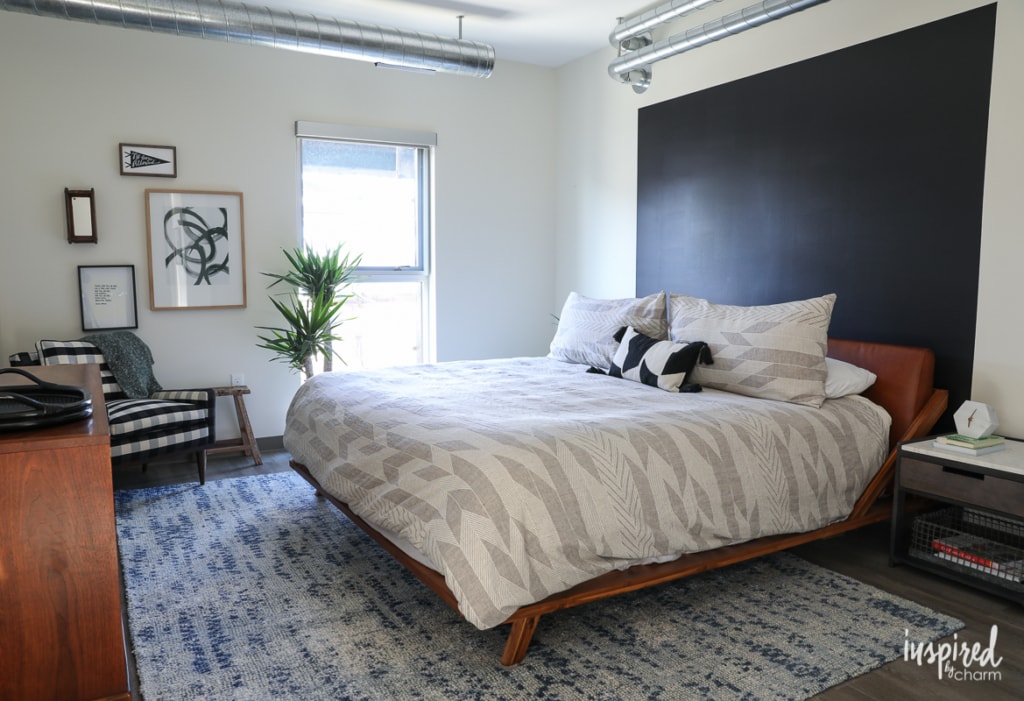 I found some barn-light-esque fixtures that will flank the bed on the black wall. I’m also thinking about adding a shelf or picture ledge about three-quarters of the way up that wall. It’s definitely plain and boring right now so adding some charm and character is a must.

The rug will also be swapped out. I bought this one before my dresser fiasco. The dresser was navy, so this would have been perfect. However, now it just doesn’t work in here. (I think it may work in my office, so stay tuned!) 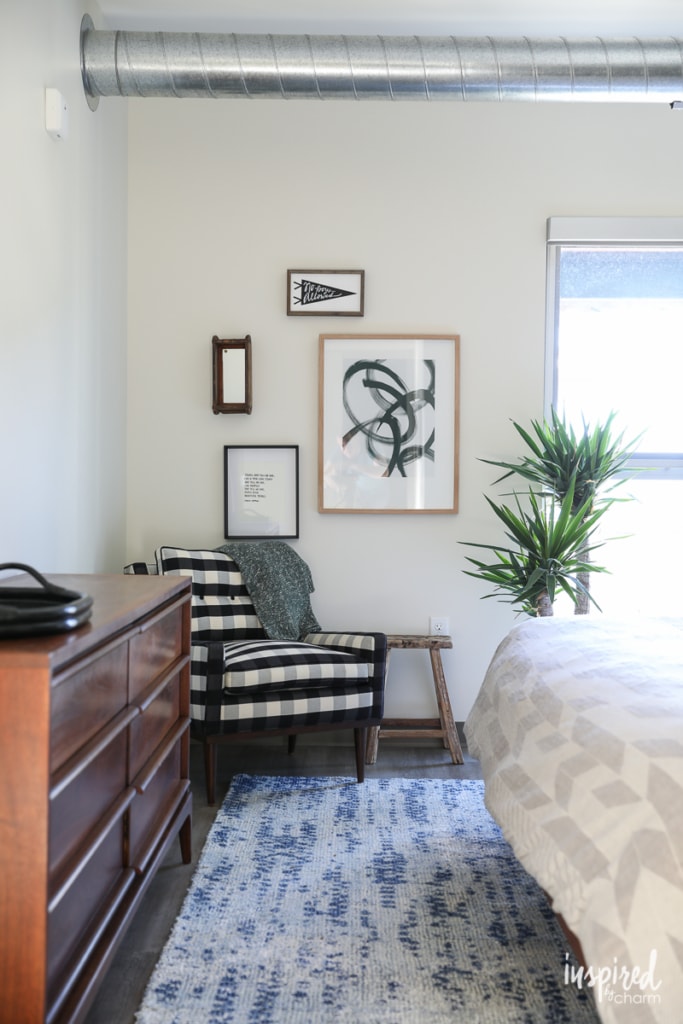 I’ve also started to hang art in this space. I’m not sure it will stay exactly as-is, but staring at a bunch of blank walls was driving me bananas. 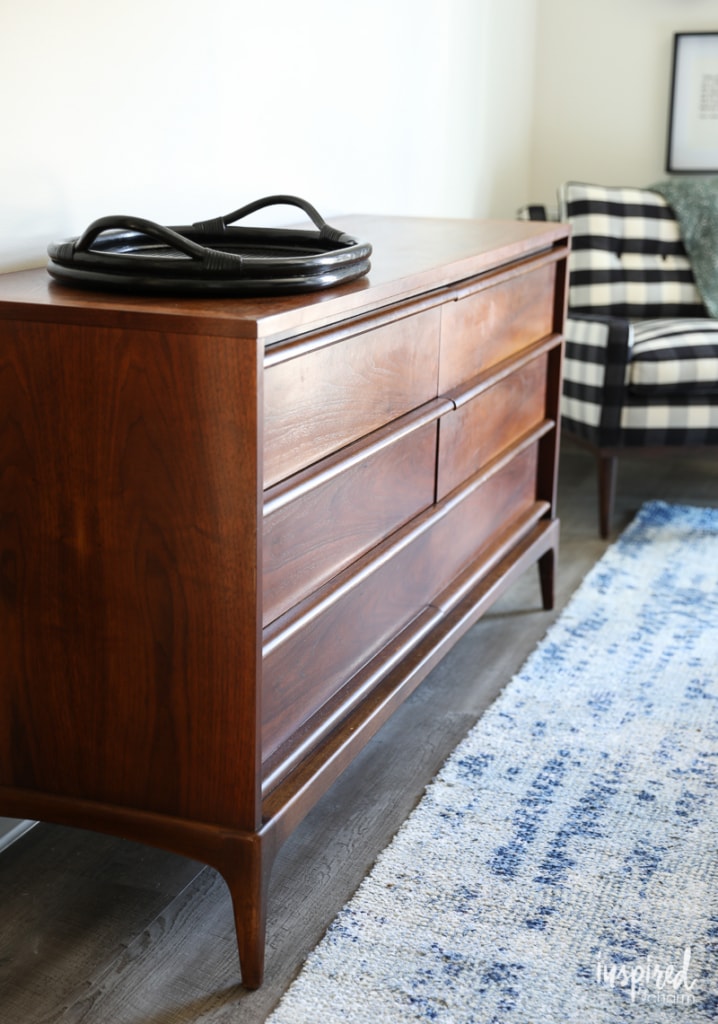 And you’ll notice, I finally have a dresser. An hour after I canceled the one I’d ordered months ago, I walked a few blocks to a local vintage furniture shop and found this mid-century Lane dresser. The folks from the store delivered it the following day. (Oh how I wish I had done that three months ago.)

Even though I’m more-or-less starting over in this room (Don’t worry, the bed, chair, and nightstands are staying.), I’m excited how the space is coming together and happy to share my in-process photos with you. Stay tuned for more updates and pop in again later this week to see what wall I painted in my office.

What do you think of the change?

It’s been a while since I’ve given you an update on my apartment. This past weekend I did some planning and painting, so I’m excited to share a few changes happening around here. Let’s start with a bedroom update and some bedroom decor ideas. To be honest, sharing an update like this makes me a […]